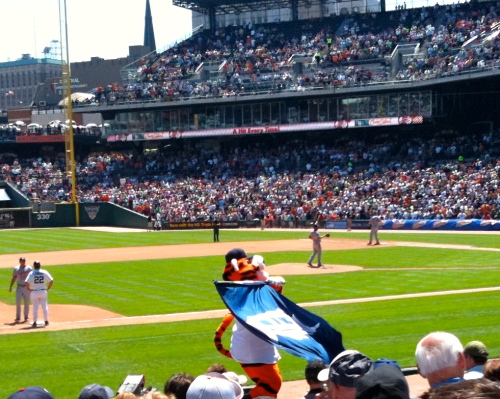 The company’s off-site meeting was loads of fun very intense, and The Consort is sporting a sunburn new skills were learned at the seminar.  However, it was also time-consuming, so we’ve many little tidbits and lots of photos today, clearly a case of style over substance, with our apologies.  We begin with a quick reminder about the Kiel James Patrick giveaway over at Beach Bum and Baby.

Click here to scoot over to the Giveaway, entries close at midnight tonight (Friday, 6.18.2010).

We also have some final images from Royal Ascot, below we see Britain’s Princesses Anne and Beatrice arriving at Ladies Day yesterday. 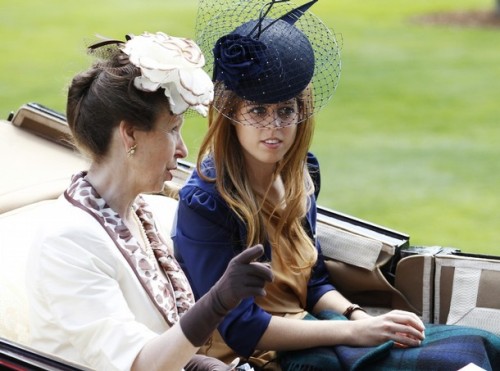 Next, Princess Beatrice and Princess Eugenie appear to be pondering their race cards (L), on the right, Joan Collins was also at Ladies Day. 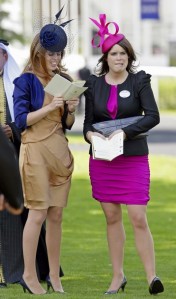 We loved these two images of Princess Eugenie. 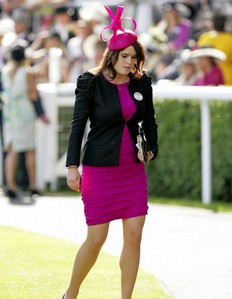 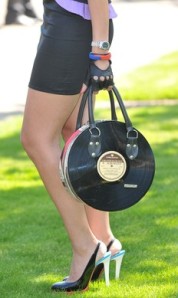 We leave the topic with two related images, both sights we should have expected but failed to foresee: the Vuvuzela hat at Ascot, and on the right, Prince William with one of the horns, seen during his visit to a charity in Botswana he supports.

Next, a reminder for those who like to be the first person in the palace with the new things: Burberry Beauty debuts this weekend.

The new cosmetics collection launches at Burberry and also at Nordstrom tomorrow. Look for some stunning advertising images shot by Mario Testino.

Also on the calendar this weekend, what many are calling “the royal wedding of the year,” the marriage of Sweden’s Crown Princess Victoria and Daniel Westling. 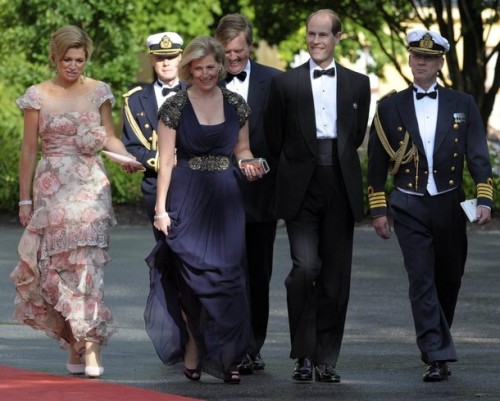 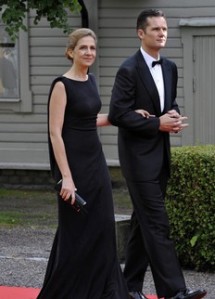 Next, the Grand Duke and Duchess of Luxembourg (L) head into the dinner, as well as Norway’s Prince Haakon and wife Crown Princess Mette-Marit.

Here are the groom’s parents, Ewa and Olle Westling, we also see Crown Prince Willem-Alexander and Crown Princess Máxima of the Netherlands.

Next, Princess Mathilde of Belgium in a bright pink gown, and Queen Margrethe II of Denmark in turquoise.

We are talking about very. serious. party frocks.  Below we see the guests of honor as Princess Madeleine, Prince Carl Philip, Crown Princess Victoria and Daniel Westling (L-R) arrive for the dinner.

It would seem wardrobe mishaps may have been averted by Mr. Westling.

Fretting about the train on one’s gown can be nerve-wracking.

While her sister looked radiant on the arm of her soon-to-be-husband.

On that happy image we say adieu until next time!

Hello-Hello! We hope everyone is enjoying a lovely almost-officially-summer day, it is beautiful here at the Prepatorium!

We are brief with today’s post, too many commitments again, we shall have to initiate a serious chat with ourselves the Social Secretary.  So we have a series of images to share, all of them timely, all of them hopefully worthy of your time.

We begin with word of the Kate Spade Sale.

Although this is referred to as a ‘sample sale’ in the promotion, we are not using that moniker; as best we know it isn’t a true sample sale with sample merchandise. There are fabulous bargains to be found, and we adore Kate Spade, we just have a minor quarrel with terminology. Below we show two of the delightful deals, both qualify as Pretty in Pink goodies for the day.

However, we must now move on to what we’re terming a Pretty in Pink Tragedy, or “When Pink Goes Wrong”, taking place at today’s Royal Ascot, no less. 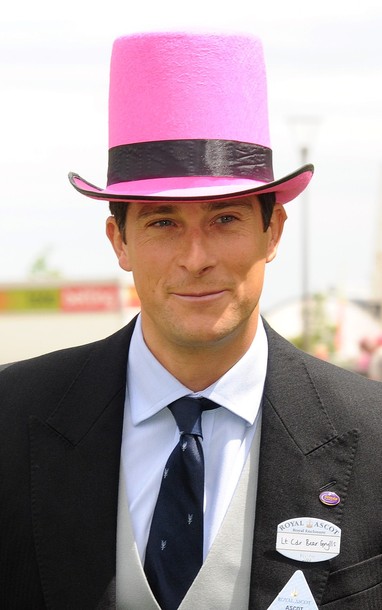 Above we see television host Bear Grylls, in a rather unfortunate choice of colors.  Below, members of the Royal Family on their way to the event, looking rather more elegant. 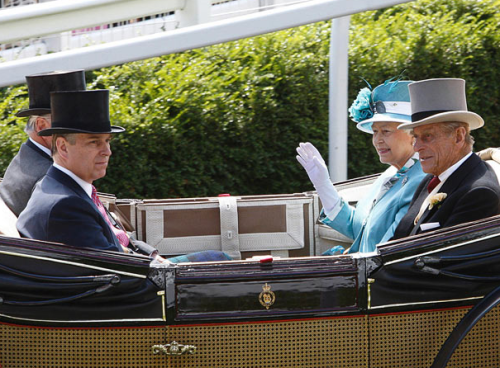 Tomorrow’s post will feature scads more photo from Royal Ascot, always a delight for those of us fond of fashion.

Next, a quick mention of an element of the FIFA World Cup that is definitely creating a buzz. (Pun intended.)

Yes, it is the dreaded, despised, despicable, detested and disrespected vuvuzela, what we refer to as the soccer horn.  It seems some are bothered by the noise created by the device. The Journal ran a fabulous piece, “Should This Horn Be Banned?” in yesterday’s paper.  From that story:

There are reports that World Cup organizers are already considering a ban on the vuvuzela, the ubiquitous narrow instrument that’s making every contest in South Africa sound like a ferocious swarm of radioactive bees—or a Hollywood publicists’ luncheon.”

The world is certainly talking about them, below an image from the UK’s First Post. 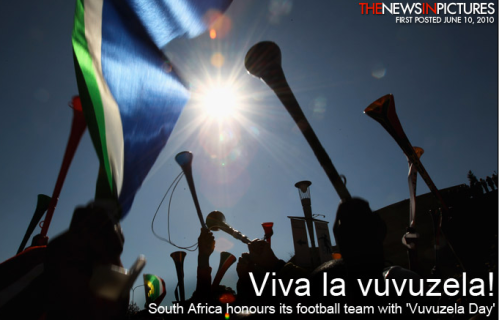 The Telegraph also runs a series of Vuvuzela Photos of the Day, including this image demonstrating vuvuzela protocol, a solid primer on just when one should blow one’s vuvuzela. 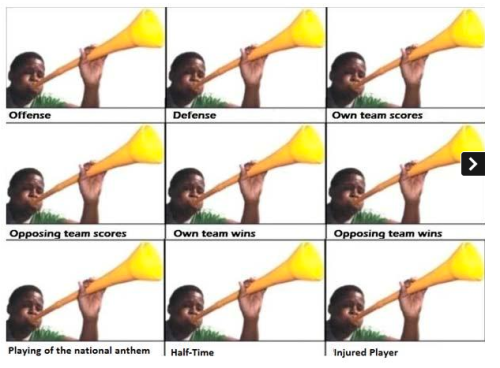 There are reports microphones are being changed by broadcasters overwhelmed by complaints, suggestions that they be banned, and overall unhappiness on the topic.  Below, a bit of this story from the LA Times:

“Host Broadcast Services, the company that provides the broadcast feed for the World Cup, has doubled its audio filters to reduce the constant blaring buzz of the controversial vuvuzelas.”

All of which have created the perfect storm, a situation The Consort is incapable of ignoring. 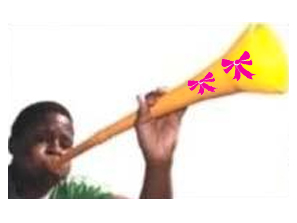 Image 'Enhancement' by The Consort

Possibly the first documented case of “Crimes Against Photoshop.”

We leave you with a final thought on the topic from the Wall Street Journal story mentioned above:

“Besides, who are we in the U.S. to complain about vuvuzelas? We gave the world Twitter and Ke$ha.”