We jump right into things today with the news there actually will be a Gossip Girl clothing line.  From a story in the Houston Chronicle we learn more about the collection: 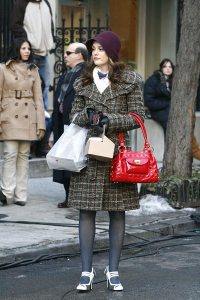 The line is being produced by the UK’s Miss Selfridge, a delightful chain of stores on the far side of the pond.  Below we show the Black Stripe Bow dress from Miss Selfridge, and the store’s Cropped Tux Jacket. 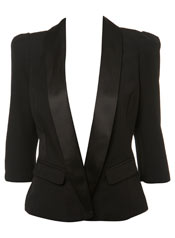 As an executive put it:

“Fashion is intrinsic to Gossip Girl and a key ingredient in the continued popularity of the series.”

There’s no disagreeing with that statement. 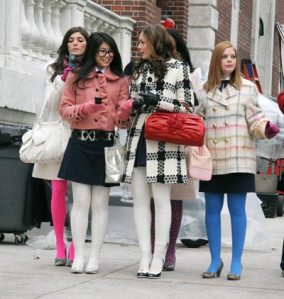 The clothing line will be available in April. We do not know if it will be distributed in US stores; if not, Miss Selfridge does ship to the US.

Fashion Week continues apace, we have several looks from Mulberry to share:

BTW, that is Willis the French Bulldog you see on the left; his resumé lists “chewing headphones…general destruction” as some of his favorite things.

While not for someone practically in her dotage (heh-heh), these are going to be darling on the appropriate young ladies.

Next, two styles from the Elie Tahari show: 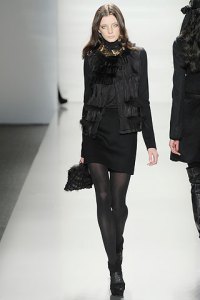 As mentioned in an earlier post, this is the first time Mr. Tahari has shown at Fashion Week. 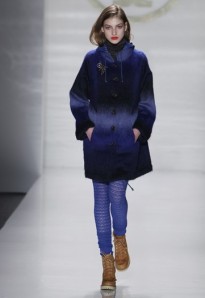 From the WWD review:

“…. with the eclectic, fashion-forward taste of the art-world archetype in mind, Burch put forth her boldest collection yet.”

More from the WWD writeup:

“It was a step in a riskier direction that paid off in vibrant, well-detailed clothes.”

We’re not sure how to characterize the brief comments on the show in the Times:

“It probably says something that guests at Tory Burch’s presentation greeted the designer as a celebrity. They oohed at the splatter-print jeans… and the jaunty sequined jacket with elastic at the waist and cuffs.” 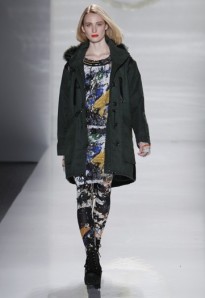 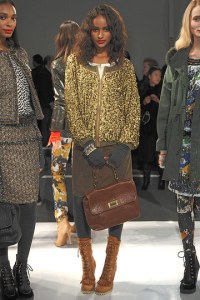 More from the Times:

“They ahhed over the shoes, high-heeled hiking boots.” 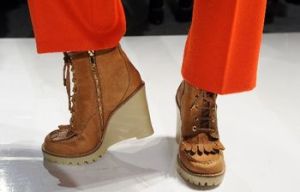 “One woman said she took the train up from Washington just to have her picture taken with Ms. Burch.”

It’s not hard to see why. Ms. Burch has never given a thought to the red carpet.”

We can’t figure out if this was meant to be snarky or a compliment.

An interesting side note; Ms. Burch supported other designers this week: she attended the Narciso Rodriguez show, and following her own event Ms. Burch joined Tommy Hilfiger and other fashion notables at the first-ever runway show by Reed Krakoff.  Mr. Krakoff is the Coach CEO, regarded as the person responsible for bringing that brand back to life and making it a power player; he is now launching his own line of apparel and accessories.

We shall have a look at Mr. Krakoff’s new line tomorrow, as well as styles from the Hilfiger show, closing out Fashion Week tonight at 8.  Anyone interested in seeing the show live, as it happens, click here for the Tommy Hilfiger Facebook page. (And do pop over to visit The Princess on FB as well, one never knows what we’ll be up to!)

1) Marie Claire has a story on “15 Preppy Chic Bargains” that we haven’t yet read; we cannot say if we think the looks are preppy or chic. Or bargains. 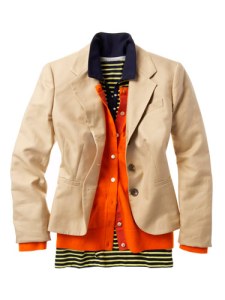 2) Finally, because of our utterly irrational and inexplicable propensity passing interest in all things Snuggie/Slanket, we bring you the very latest: the Siamese Slanket.

We only discovered this last evening, via those sharp shoppers at Outblush. Keep in mind, the Slanket folks say they were first with the phenomenon, that the Snuggie is merely following in their footsteps.  (Click here for the post that really gets to the bottom of this important issue, with a look at what the Consort calls the Snuggie-Slanket Smackdown.)

Not  only do we have the Siamese Slanket, available in two snappy colors (ahem), we are happy to introduce readers to the Travel Slanket.

With that we say g’bye until next time!