Hello-Hello, welcome to a bright and lovely Thursday, we hope your day is also filled with sunshine.

Today we look at a talented new designer, Katie Ermilio.

We learned about the young lady and her creations via a post over at T Magazine (the NY Times‘ style magazine). 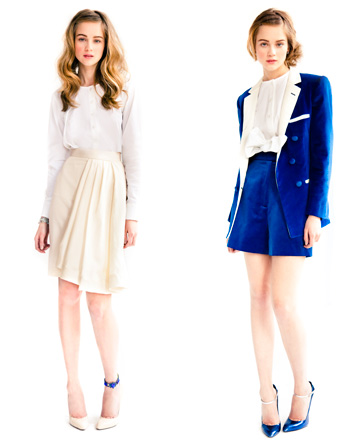 Courtesy Photos via The Moment

Below we see the designer in some of her own creations. 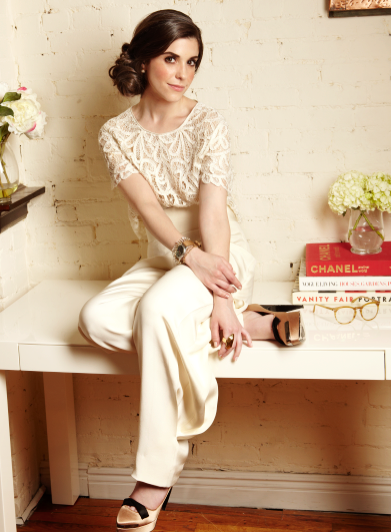 The piece is titled “The Vogue Intern/Katie Ermilio,” and Ms. Ermilio did in fact intern at Vogue, but her design pedigree reaches back generations. She grew up on the Main Line in Philadelphia, her grandfather Arthur was Grace Kelly’s personal clothier, and her father runs Ermilio Clothier & Specialty Shop, considered the preeminent equestrian tailoring shop in the country. Below we see Robert Ermilio, who is probably a bit busy this week, we are in the middle of the Devon Horse Show.

At any rate, many of the styles are lovely, in rich hues and clean, unfussy lines. Of course we selected designs to show that are Pretty in Pink, but the group offers pieces in a broad palette.

This marks Ms. Ermilio’s first foray into a full-scale collection, the line will be available nationally at Shopbop. More on the designer from the T post:

““To make extra money, I would put my dresses in my dad’s storefront and they started to sell,” she says. Ermilio designs with a classically tailored Gossip Girl in mind. Her fall 2011 debut, featured double-breasted velvet blazers, wide wool-satin trousers and flirty chiffon tees paired with big swing skirts.”

Next, happy news for those social networkers fond of über-prep Gwyneth Paltrow: the actress is now Tweeting.

In her first Tweet and first FB post Ms. Paltrow shares a link that takes you to a brief video in which she explains she is “trying to join the 21st Century…,” joining Facebook and Twitter. In today’s posts (shared on both sites, it seems she will be replicating the content) she shows the kids (from the back) at a ‘super-secret Cold Play’ rehearsal.

1) Look for a new line from Tommy Hilfiger, “Tommy Girl” is slated to debut in the Juniors departments at 150 Macy’s stores this July. WWD reports the new collection is aimed at 12- to 18-year-olds, and prices will run “from $32 for t-shirts to $129 for outerwear”.  We’re thinking we should really refer to the designer as “omni-Tommy,” media coverage of his various enterprises and the ‘rebirth’ of his core lines are everywhere, look for a post  on the topic in the not-too-distant-future.

2) Tiffany has launched another website, What Makes Love True.

The micro-site opens with a short film, Will You Marry Me?, showcasing different stories about marriage proposals. There are four segments on the site, “Love Stories,” “Tiffany’s New York,”something of a cultural guide to the city, “Love Is Everywhere,” an interactive map, and our favorite portion, “The Art of Romance,” with playlists of romantic songs and movies.

On that romantic image we say goodbye until next time!