Yesterday’s post covered the topic of style at Wimbledon, and the ‘Preppy vs. Pirate’ attributes assigned to the Roger Federer vs. Rafael Nadal rivalry. And whilst those issues certainly have all the excitement of Cook’s day old rice pudding (that is not a slam mind you, it is *very* good indeed) we did tease other fashion updates, and we do want to deliver on that promise. Let’s start with the trench coat, which we might point out is sometimes referred to as a ‘mackintosh,’ albeit infrequently in this household. At any rate, here you have it:

We are talking about the white trench coat donned by Serena Williams and worn for her entrance onto the court. It may be difficult to spot in the photograph above, but there is a gold Nike swoosh on the upper left side. And the back story on the coat?

“I was talking to Nike, I walked in, had this great coat on there and they said we should do a coat like this for Wimbledon,” explained Serena about the evolution of this coat. “I was like, Okay, cool. I was really all about it. Now I have a wonderful white coat I can wear on the court and also, you know, in New York for those rainy days. “

The above is from Serena’s home page; unfortunately there do not appear to be any updated Wimbledon pix, a shame for a site of this sophistication, although there are audio updates from Wimbledon one may download. When asked about The Coat following her match (which she won handily) Ms. Williams was positively effusive about the coat: “I just love coats. I’m always buying Burberry coats. And I don’t know why, because I live in Florida, so it doesn’t really add up.”

When queried about Ms. Williams’ coat, a spokesperson for the AEC (All England Club) said “As long as she is wearing clothes, and they are white, we will be happy,” referencing the Club’s hyper-strict dress code for play.

Moving on to our next tennis fashion discussion, let’s start with a look at The Tuxedo Shorts Set as worn by the lovely Maria Sharapova today. A bit of background on this: Ms. Sharapova has never worn shorts at a Grand Slam event. Until now.

Presumably many of you have already seen coverage of the Tennis Tuxedo, if you will, but hopefully our way-too-many photos, like the one above that shows the jacket more clearly than any of the candid shots did.

The Nike Sleeveless Women’s Tennis Top is available in white or navy, with the navy a superior look in our opinion. 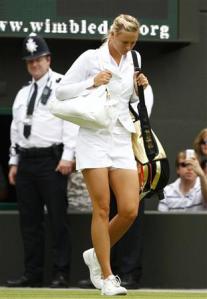 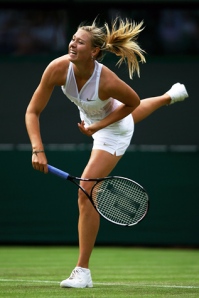 Of course, nothing we write from this distance will capture the excitement and energy of being at Wimbledon, as we are all too aware. We did think this writer’s description in the Telegraph’s story of the Sharapova apparel was apt, also done with a sense of humor, vital when covering these things.

The clothes? The tuxedo is not, repeat not a tuxedo, despite its wearer having described it as such. It is a waist-belted jacket with wide lapels, and don’t let anyone tell you otherwise.

The shorts… there isn’t a great deal to say about the shorts, except to note that they cover what they are supposed to cover and that occasionally, especially when she is doing that left foot, right foot shuffle before she serves, the rear view resembles a pair of puppies scuffling in a bag.

Of course, the tennis apparel wardrobe is not all Ms. Sharapova must think about; she is also tasked with wearing Tiffany earrings. Long a friend to the tennis world, the jeweler is partnering with the glamorous tennis star for a two-year period covering the four Grand Slam championships in each of those years. A pair of earrings is designated for each tourney and once worn by Ms. Sharapova made available for sale online and at the company’s retail outlets. And the Wimbledon earrings? 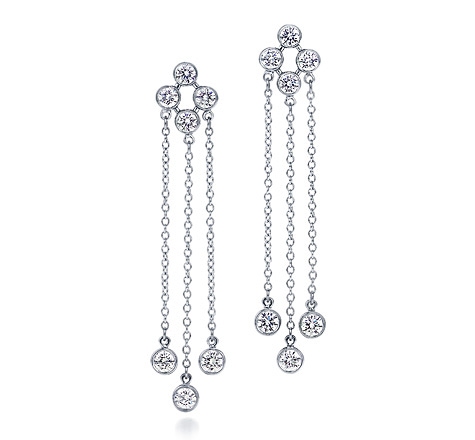 They are the Tiffany Swing earrings for pierced ears, described thusly:

Tiffany for Maria Sharapova. The world’s top-ranked player in women’s tennis is wearing Tiffany Swing earrings at Wimbledon. Triple drop earrings of round brilliant diamonds in platinum, for pierced ears.

The first pair made their debut at the French Open, 18k yellow gold Elsa Peretti Wave earrings “that cut a striking profile without adding weight.” The Princess must admit she was unaware Tiffany accessorized tennis dresses. But since that event was played we have learned that Ms. Sharapova’s French Open dress, the so-called Paris dress by Nike, has a “luminous Tiffany pearl button closure that fastens at the back of the dress.” 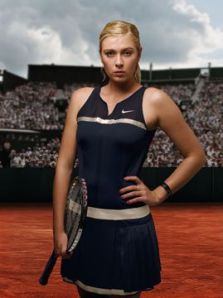 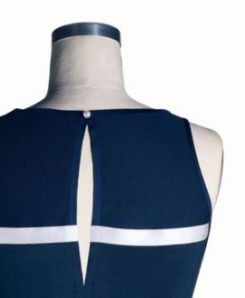 TP found the dress to be an absolutely stunning creation, simply beautiful on Ms. Sharapova. For multiple views of the dress, drop by Zappos.

And one last tidbit about Tiffany and tennis: their 2007 US Open collection in partnership with the USTA for the US Open last year wasn’t entirely hideous, as can be the case with the ‘promotional’ or ‘collectible’ jewelry accessory markets.

Finally, a few final sale notes for the day. The first is Nordstrom where the ginormous SALE continues, and we are so pleased to see the Sugar ‘Smokin Cat’ Casual Houndstooth Flat we adore is marked down to 50% off its original price, and amazingly, there appears to be a good selection of sizes. 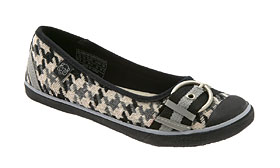 Then there is the Original Penguin SALE, a must if you can make the time.

Especially with their cute Kids look, as seen below: 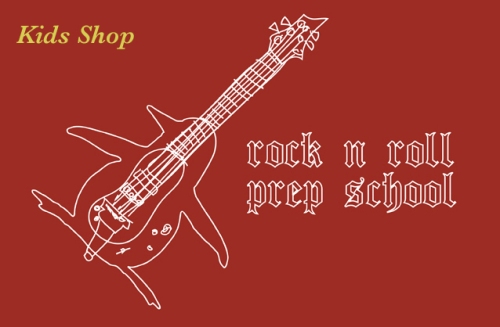 The Princess is out of the Palace for much of the day Wednesday, returning late in the afternoon. Until then, may all of your serves be aces!