All Kinds of News About Sperry, Including That New Collection Milly Designed!

Hello-Hello, we hope you are in the mood for some Friday Fun, that is today’s mission.

We begin with a look at last night’s big bash launching the new Milly for Sperry collection. 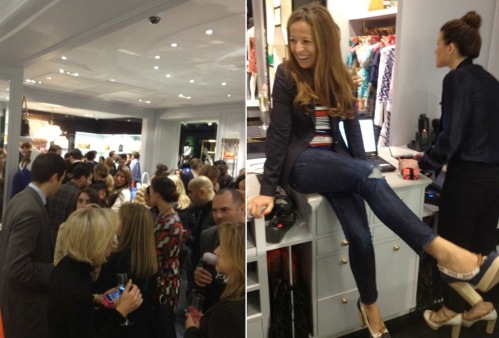 While the collection officially made its debut at the party, some readers may recall this post showing a few styles from the line at the Milly runway show last fall.

What I Wore Tumblr

This particular collaboration does not require a vast stretch of one’s imagination, it is more a blending of two brands favored by many preps. As this story in Racked shares:

Milly founder Michelle Smith says she has always, “adored preppy, nautical style, and was thrilled to put the Milly spin on an icon of American fashion.”

The collection includes the CVO Laceless in Navy Links, Coral, and Roses.

The Links and Roses patterns are classic Milly designs, it is fun to see them incorporated in the line. There are also a variety of heels, below we see the Women’s Authentic Platform.

The collection offers 13 styles, including the women’s Authentic Original in several colors.

The nautical influences are easy to spot, the sailboat lining on the Cunard is cute, the Southport’s rope ankle-wrap also gives off that vibe.

There is lots to like in the group, even for those of us who embrace our inner frump. (Heh, heh, heh.)

That wasn’t the only big news for Sperry this week, the company also opened its first store in the city.

The store is in the Flatiron District, officially opening on Wednesday.

NBC New York has an interesting piece on the store:

As a girl who grew up in Westport, CT playing tennis, rowing crew and even being voted “class prepster” by my senior class, you might think I came out of the womb wearing a pair of Sperry Top-Siders. But truth be told, that was not the case (I really do wish it was, though). I discovered the classic Sperry Top-Sider, also known as a “boat shoe” in college, and I never looked back.

Another image from inside the shop. 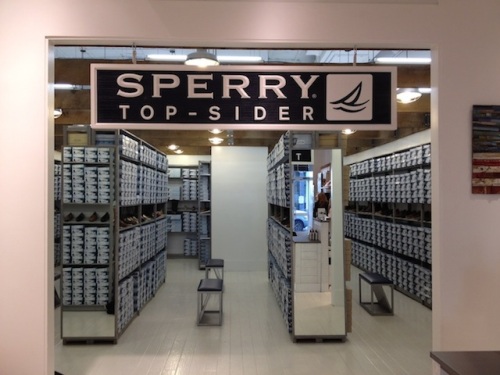 If that looks more like the back room, this explains why:

The front half of the store has all the styles beautifully displayed, and the back half is a “self service boat house” in which customers are free to help themselves to try on or be helped by an employee, an option which I think is just great. There’s nothing worse than sitting in a busy shoe section and being completely helpless (Ok, maybe there’s a few things that are worse…). In the new Sperry store, it’s your choice–help yourself or be helped. I’m excited to see this concept in action.

The notion of being able to help yourself in the ‘Boat House’ is appealing.

The final bit of Sperry news involves a significant expansion of the company’s offerings, including:

…Sperry Top-Sider bags, belts, swimwear, eyewear, scarves and hosiery for men and women, among other categories. The brand extensions will debut for spring ’13.

Women’s Wear Daily had the story Monday, according to the company’s CEO “The brand has picked up some significant momentum in the marketplace”.  As The Cut blog put it:

…it could be good news, even for folks who don’t “summer” at “the Vineyard,”…  The brand extensions, set to drop for spring 2013, will soon include apparel, if all goes well. While it’s doubtful that their future offerings will be any different from what you can already find in the L.L. Bean or Vineyard Vines catalogues, at least it’ll provide magazines with one more source for those “Preppy Is Back!” editorials.

It’s nice to know we aren’t the only ones amazed at how many ‘preppy is back’ editorial stories there are on an annual basis.

Also today, a brief glance at next week’s Vintage Fashion & Textiles Auction at Kerry Taylor Auctions. Yours truly would *adore* the Chanel suit seen on the left, today’s Pretty in Pink. (Don’t ask what we would do about the length of the skirt, perhaps I’d frame it and hang on the wall here at The Prepatorium.)

Both suits shown above date to the 1980s.

Below we share two relics from an earlier age, Lot #34 includes a damask ball or bridal gown adorned with pink satin ribbons, circa 1895, and an 1860s ball gown.

Remind anyone of something Scarlett might have worn to enchant Ashley Wilkes and all the other young men visiting Tara?

The auction is next Tuesday (the 7th) at Kerry Taylor in London.

A final reminder for anyone who has been out of touch and perhaps neglected to enter our Jack Rogers Navajos giveaway, entries close at midnight tonight (Friday, 2.3.2012), be sure to throw your name in the virtual hat!