We begin with a look at a style term we generally consider an oxymoron: sexy preppy.  Think back to those growing-up years, was appearing “sexy” something Mummy or Daddy aspired to? An achievement looked upon favorably, on a par with shooting in the low 70’s at this year’s club outing? A priority upon the fashion landscape at your palace?  We think not.  And it certainly was not a topic of conversation, heaven forbid.

Now, before we get our whiskers in a wad, be advised the Princess is not suggesting that those adhering to a preppish style aesthetic are not “sexy”.  Rather, we make a distinction in how one arrives at attaining such a look.  For preps this comes as a byproduct of pursuing classic lines in well-made garments; the result is an understated elegance. This far transcends any of-the-moment styles frequently revealing much-too-much and leaving nothing to the imagination.  The style is accented by a carefree touch of the whimsical, and it never takes itself too seriously.

Having now bored everyone to tears said all this, we were intrigued by a story in the Calgary Herald last week, “The Prepster“ with a subhead “Local Designer Embraces Preppiness And Makes It His Own With Edgy Designs”. 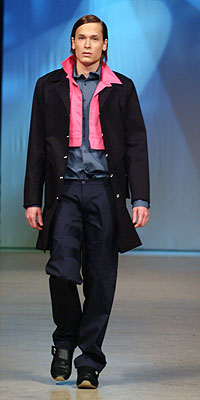 The story focuses on the KaaDiki menswear line, seen above and in the photo below. 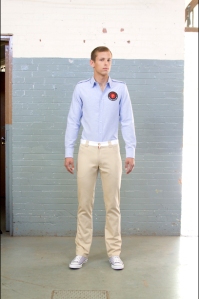 The story describes the line this way:

“Featuring plenty of red, white and blue–he loves bright colours– his button-down shirts have preppy crests, zip-up sweaters are form-fitting and blazers are elegant yet funky.”

While the apparel exhibits preppish traits, we must be annoying and point out the phrase “preppy crests” belongs on our ever-lengthening list of fashion oxymorons. Honestly. The family crest is rarely (if ever) seen these days, far more a re-invention of designers like Ralph Lauren and Tommy Hilfiger, and most assuredly not seen on a woven shirt. 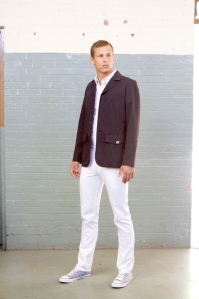 Designer Haithem Elkadiki describes his style in the story:

“I’m obsessed with the preppy thing, always. But preppy can be boring, so it’s taking the whole idea and mixing it with sex appeal.”

As mentioned, there is much to like in the line, and the young designer is more than appealing, passionate about his work. But we don’t think there is any peril The Consort will be seen sporting KaaDiki at Princess InterGalactic HQ.

Were you raised in a tradition favoring a  “sexy” look (ahem), or did the family favor things more like those found at LL Bean and Brooks Brothers?

Our next little newsflash is almost a week old and most readers are probably already aware of the news, but you know what we used to say all those years we worked in TV: “If it’s news, it’s news to us!” (Heh-heh-heh.)

At any rate, we were tickled to learn via WWD that one of our favorite designers has announced a new collaborative effort: Lilly Pulitzer is partnering with LeSportsac on a line of bags for Spring 2010, whoo-hoo!

There are three different Lilly prints being used for the Sportsac pieces, including ‘Hip Hop Hooray,’ seen below. 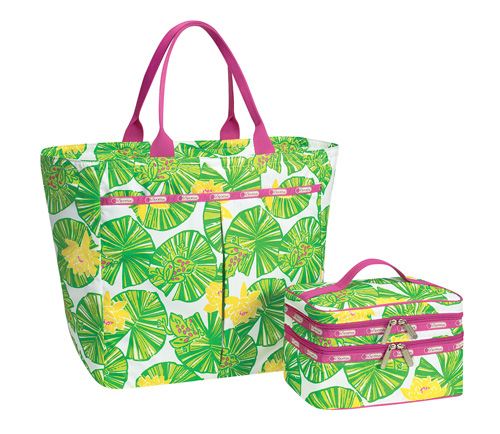 According to the WWD story:

“The three prints — cobranded specifically for the collaboration — center on endangered species such as Florida panthers (other “animals of the Everglades” are also featured).”

Below, what we believe to be the ‘Purrrfect Patch‘ design: 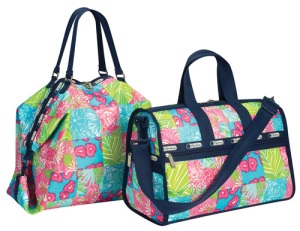 The joint effort is nothing new for the company; previous collaborations have showcased designers like Stella McCartney, Diane von Furstenberg, and Jonathan Adler, among others. Next, more loveliness in the ‘She’s a Piston’ print. 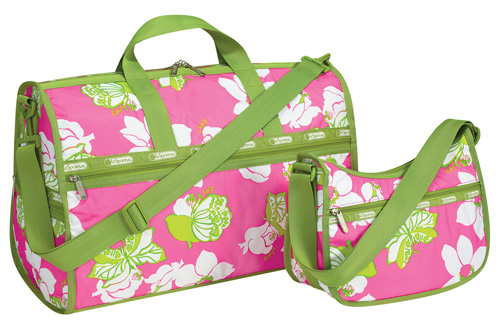 This one is so luscious we are making it today’s Pretty in Pink. Our thanks to the always-on-top-of-things Nitrolicious for the photos, as well as information on the upcoming Lilly Loves Green campaign and the three LeSportsac prints:

“… a yearlong initiative generating support and awareness for all the green things Lilly loves (the ocean, the animals, and the planet) – the three co-branded prints center around endangered species, specifically Florida panthers, butterflies, and animals of the Everglades, generating environmental awareness in colorful fashionable style.”

We have had more than one LeSportsac on hand almost since the company’s inception thirty-five years ago and can’t wait to see these in person. There will clearly be more than one “must have” in the collection, they all look like loads of fun.

We share a tidbit we think the lovely Muffy Martini will consider good news, word that Montblanc is expanding their footprint in Beverly Hills. Friday’s WWD (Women’s Wear Daily, subscription req’d.) shares the interior of the firm’s larger star on Rodeo Drive. 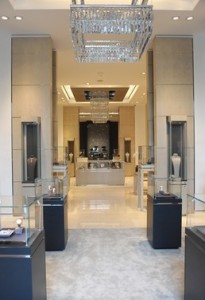 One of our favorite topics of conversation often arises when discussions of one’s favorite writing instruments. Below, the Paso Doble pen from Montblanc.

We didn’t realize Montblanc was making eyewear – are we hopelessly behind the times with this realization?

Above, the Montblanc Amalfi sunglasses.

On this note we say G’bye until tomorrow, may your afternoon be fabulous!