Hello-Hello, today we have loads of little bits and bytes we hope you find moderately entertaining, beginning with a change in the dress code for Royal Ascot. From The Guardian:

Nick Smith, a spokesman for Ascot, said: “It is stretching a point to say standards have collapsed but there is no doubt that our customers would like to get back to a situation where it is universally acknowledged that this is a formal occasion and not an occasion where you might dress as you would at a nightclub.

“It is probably fair to say that the dress code hasn’t necessarily been enforced quite as rigorously as we might have liked.”

It turns out that relaxing the rules in an effort to appeal to a broader section of possible attendees hasn’t gone as well as hoped, at least not when it came to how those attendees were dressed.  If confused, one need look no further than the Royal Ascot website, where the new rules are laid out:

Methinks most of the ladies seen in this photo from last year would not pass muster under that new hemline rule.

Back to the more stringent standards:

Something of a visual style guide was released along with the new rules, this next photo seems to reinforce the ‘trouser suit’ information. (FYI, ‘trouser suit’ as opposed to ‘pants suit,’ because on the far side of the pond ‘pants’ generally refers to a ladies’ unmentionables, a cultural distinction your fearless scribe only discovered last summer.) We’ll make this our Pretty in Pink for the day as well, it is a lovely look.

Royal Ascot via The Guardian

However, those are not the only new rules, back to Royal Ascot:

Ladies are kindly asked to note the following:

Again, ensembles (we use the term loosely here) worn last year to Royal Ascot that do not appear up to snuff vis-à-vis the updated standards.

Another ‘approved’ look via The Guardian:

For those who plan on attending with your MOTH (Man Of The House), one final photo, this one showing acceptable styles for both the Lord and Lady at your palace.

Our other primary item of interest involves Mad Men, Season 5 premieres with a special 2-hour episode March 25.  Below, the poster promoting the new season.

Sure to be a collector’s item, this year’s poster takes mid-century minimalism to a new level. We can only hope things are looking up for Don , I fear he has pickled his liver by now.

An interesting sidebar involves Newsweek, word is the magazine is doing a special issue in conjunction with the new season launch. More from Advertising Age:

Newsweek is planning an issue marking the return of “Mad Men” this March by adopting the magazine’s 1960s design throughout — all the way, it hopes, to the ads.

The “Mad Men”-themed issue, which will be dated March 19, will include a cover story on the series and a feature on the role of advertising in U.S. culture.

It seems that virtual wall keeping editorial content and advertising separated isn’t in place at Newsweek.  Below, two Newsweek covers from the Mad Men era, the cover on the far left is January 1964 and on the right, December 1965. 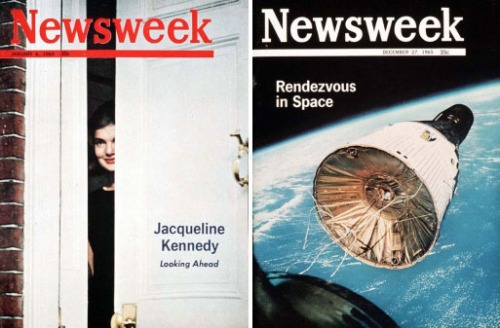 We leave you with two lighthearted items, the first involving these delightful images: what happens when an illustrator creates a few fashion pooh-bahs in the manner of the Simpsons? 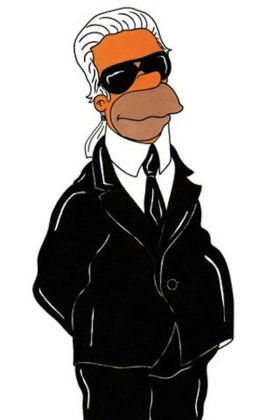 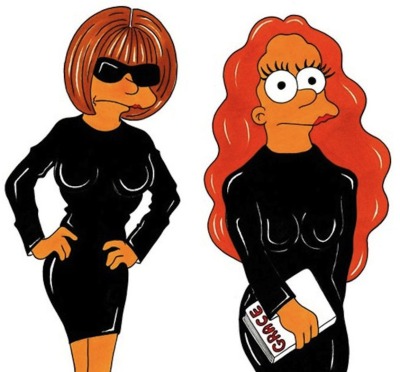 Mr. Palombo is known for, among other things, creating the blog Humor Chic. He also created Vanity Karl, seen below.

We like the illustrator’s sly eye and sense of humor.

Our other lighthearted tidbit today involves a much loved product. 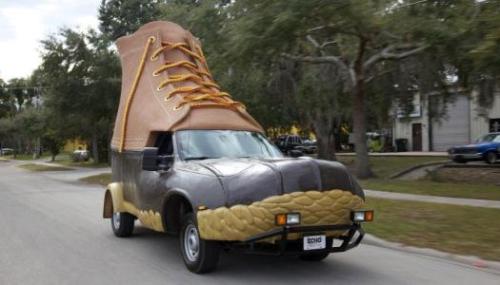 It was created as part of Bean’s 100th Anniversary this year (more about that in a future post, as well as a special giveaway), and it must be just something to see on the road.

Here is how it looked as it headed to Times Square today.

The Oscar Mayer Weinermobile may have been bumped to second place in our hearts and minds. You can read more about the Bootmobile travel plans (yes, it will be on the move) and other Anniversary events on Bean’s first official blog.

Until next time, keep smiling and keep warm!

Hello-hello, friends and neighbors.  The Consort here gliding smoothly mikeside to entertain and confound you while The (lovely and talented) Princess enjoys an “offsite” day.  We anticipate her return tomorrow.  I’ve been reading her recent posts on the events at the venerable Royal Ascot and I am, quite frankly, concerned.  Not for The Princess, mind you.  She is capable of handling herself, thank you.  I am concerned for the assault on the senses that has been taking place at Ascot.  Let’s explore, shall we?

This poor woman apparently does not realize that there is a garden on her head.  Still, it’s a fetching look and takes a certain amount of style to carry off.  I’ve always found that understatement is lost on so many people.  That is certainly not at risk here.  What sort of woman dares this look?  If you guess only a leading edge fashion maven could handle this pressure you would be incorrect.

This beauty is aging gracefully.  I can only wish I do the same.  Because I’d look great in that hat.  Or there’s this look… 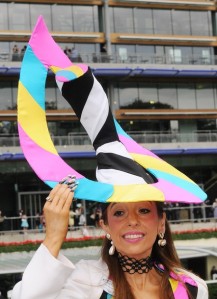 I don’t even know where to begin.  This is clearly a woman who knows how to “take it to the next level” (to use a trite middle-level management cliche’).  Her colorful headwear is only topped by her glorious manicure.  I’m speechless.  But wait, there’s more.

National pride is inspiring.  This woman apparently confused Royal Ascot with the World Cup.  She is clearly a fan of Germany.  And who can blame her after the German team’s 4-nil win over Australia.  What does that have to do with Royal Ascot?  Absolutely nothing.  Therein lies the magic of this creation;  art for art’s sake.  But sometimes fashion has a serious side.

This, of course, would not be one of those times.  Can you imagine the conversation at the milliners?  “Yes, I would like to have two swoopy tube deals coming out of a couple of flowers that we’ll hot-glue to my head.  At the end of those tubes put some random pointy things.  Smashing!”  I imagine the upside of this look is that with the proper wiring you would be able to receive high definition television signals.  Now that, my friends, has promise!

One of things that make Royal Ascot so special is the number of celebrities who make appearances.  Like Carmen Miranda…

Maybe I’m wrong on this one.  But you could slip a banana, grapes and some other random fruit in this creation and you’d have the look down cold.  But don’t think the women have this event all to themselves.  Not by a long shot.  Men are required to wear top hats.  And that’s where this gentleman went wrong… 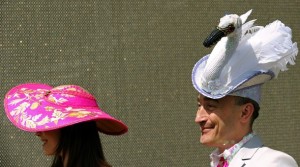 He must know that a swan has landed on his head.  I have had some experience with swans.  They are mean, territorial and messy.  Clearly that pleases this man.  Or perhaps he has spotted the dinner platter in front of him and he is imagining swan for dinner.  “If my horse loses I’ll eat my hat!”  Indeed.

Walking the fashion razor’s edge is tiring business.   Sometimes you just have to settle down and compose yourself. 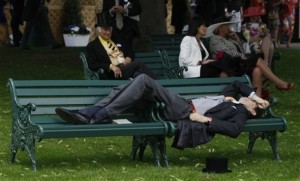 I confess this would be me.  However, I would be wearing my traditional white socks with my morning suit.  Classy.

Will you look at the time?  I must run so I’ll leave you with the usual reminder:  Take care of your waitperson because they’re working hard for you today.  Look for The Princess to be back tomorrow and life to return to what passes for normal here.  Now I’d like you to enjoy the musical stylings of four young men with a message.  Good night, all.

Filed under Posts by the Princess Consort, preppy