Hello, Happy Friday and welcome to a special edition of the Preppy Princess!

This will surprise no one that is a regular reader: The Princess Consort found multiple live feeds of the events going on over on the other side of the world. He also also took the “Sharing is Caring” sentiment to heart. Concentration is impossible. Therefore this post will be short and hopefully a bit better than bittersweet after yesterday‘s tirade measured comments about the air quality in Beijing. It will however, be about the Opening Ceremonies, so if that is something you don’t even want to hear about, you should skedaddle away until they have aired this evening.

First off, a few shots of the Ralph Lauren Olympic Summer Games Parade Uniform as worn today by our athletes in Beijing at the Opening Ceremonies. 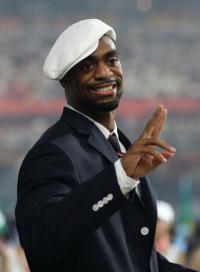 Shortly after this international Parade of Athletes aired on the Consort’s computer in real time, we received email correspondence from Polo Ralph Lauren “Presenting the Official Parade Uniform of the 2008 US Olympic Team.” If interested in purchasing pieces from this Collection, you can head to the Polo site through the links in the previous sentence or use the USOC’s site for most of the Opening Ceremony items.

1) Silly girl! Trying to sit and write a blog and conduct other business with the Opening Ceremonies going on one desk over is futile. Utterly pointless. Cease. The Preppy Princess will survive while for an hour until this ends, so stop. Now. Give it up and go watch. (Take Kleenex.)

2) As discussed on other blogs last night, for reasons unknown to us, human spectacles like the Opening Ceremonies provoke an emotional response. (Yes, I know, how very dreary.)

3) The US Team looks very sharp in their uniforms. As anticipated, the Ralph Lauren designs are stellar and the Chinese execution of them also outstanding. The caps, or berets, are a nice touch and not at all foppish as some feared.

Looking at each nation’s uniforms is a blood sport for some, but not TP. That however, does not prevent a running commentary on the looks worn by other countries, enhanced only by the fact these are being viewed on a 24″ inch iMac monitor, not a large television. Thoughts? Japanese-snappy. Argentina-casual. Great Britain-this one is a TBD, requiring further attention. Bolivia-elegant. France-disheveled. Canada-slightly wacky motif that needed better definition 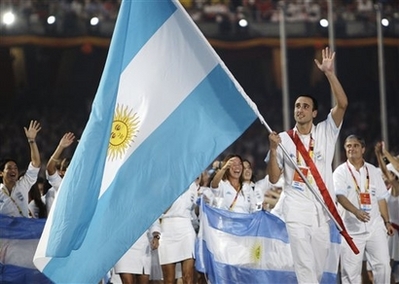 The NY Times Olympic Blog had some fabulous fashion commentary. We don’t have pix to pick up on their critiques of certain looks, so you will simply have to watch the television tonight or go hunting on the internet if you want photographic references to their commentary.

The Lithuanian team, led by flagbearer Sarunas Jasikevicius of the basketball team, is clad in shockingly lime-green polo shirts.

While some teams look like they have wilted a bit in the heat, the Spanish team, oh so colorful in their yellow and red suits, came in waving their Panama hats to the crowd.

Spanish basketball star Pau Gasol, however, is not waving but chatting on his cell phone.

The women of Hungary’s team are unfortunately dressed in skirts and jackets that appear to have been doused in splotches of red paint.

It is a small miracle those got through security.

For more commentary, all of which is simply excellent, go to Lynn Zinser’s Olympic blog at the Times online site.

It seems no one can execute ceremonial occasions on a grand scale with the precision the Chinese can, with the possible exception of the Russians. Majestic barely describes some of this, and we only saw about forty-five minutes of the event. 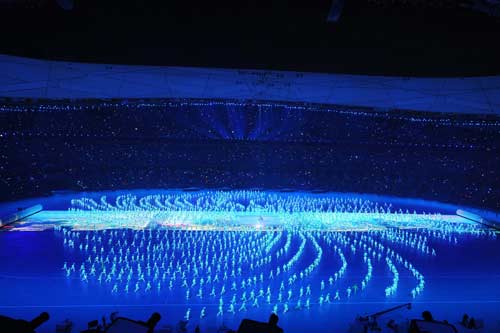 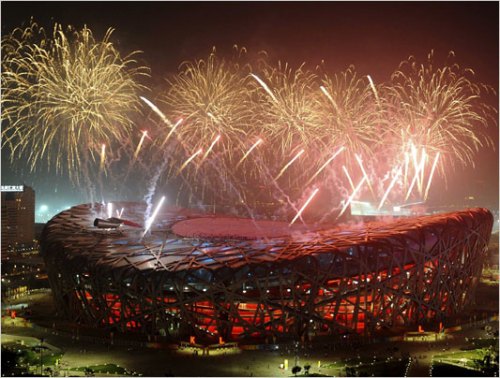 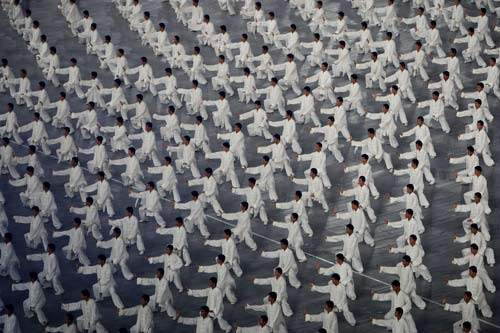 (Yes, that was Kung-Fu in the photo above.) As we mentioned we really only viewed perhaps forty-five minutes or so of online 4″-frame-on-the-screen video and it was dazzling. We have elected not to show you more photos, of which there are hundreds, because they really would be “spoilers” in our humble opinion, detracting from one’s spontaneous reactions to the events as they unfold on NBC’s taped broadcast this evening.

We can tell you some of our favorite tennis players were on hand: 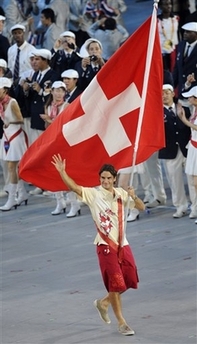 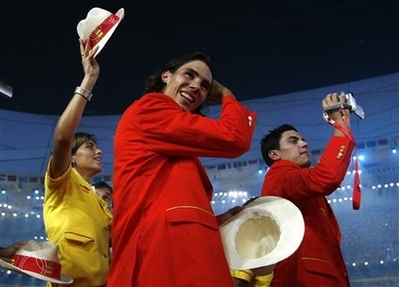 Mr. Nadal looking slightly more relaxed than he when he was swarmed by media upon arriving at the Beijing airport; such a throng formed that some referred to it a stampede.

Truly one of the most emotional images of the day, and one part of the ceremony you probably want to be sure you’re watching, is the moment when Chinese flag bearer Yao Ming enters the stadium. Because Yao leads the athletes from the host nation, they are the last in the Parade of Athletes to make their entrance. 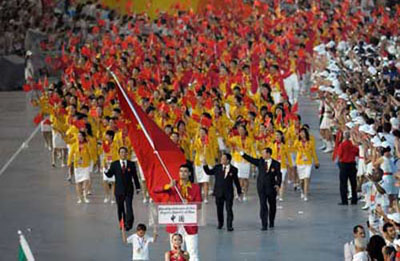 It becomes immediately evident he is accompanied by a child; it turns out the child is a nine-year-old boy who saved the lives of two classmates during the killer earthquake that rocked Sichuan province a few months back. When this giant of a man (he is 7′ 6″ tall) reaches down to take the child’s hand your heart may skip a beat in wonder at the sight.

And on that extraordinary image, we will leave you for the time being.