Today we share tidbits about a few books that look intriguing, and then a quick reminder about Targét’s weekend  launch.

We learned about this first volume via last month’s issue of Matchbook Magazine. It is “Tomboy Style” from writer Lizzie Garrett Mettler. The book is actually a natural follow-up to the writer’s well-known blog, TOMBOYStyle.

From the book’s liner notes:

Tomboys are confident, rebellious, and adventurous. They are bold, brazen, fierce—and sexy. They aren’t known for following rules, they are known for doing—and wearing—whatever they want.

Tomboy captures the tomboy’s style, her je ne sais quoi, her wardrobe, and most importantly, her spirit.

The book offers Seven Archetypes of Tomboy Style, including “The Prep”.  We always enjoy Booth Moore’s pieces in the LA Times, here is a snippet from his story on the book:

…Mettler realized she discovered her own tomboy style while at boarding school, trading clothes with her frilly best friend Kingsley Woolworth, who favored bubble-gum pink bed linens and diamond stud earrings. By borrowing some of Kingsley’s things and mixing them with her old favorites, many of them borrowed from her older brother, Mettler found her own style vocabulary, epitomized by a shirtdress cinched with a men’s ribbon belt.

Below we see a Field Guide to Tomboy Style from the Los Angeles Times.

From the NY Times‘ T magazine:

Thanks in large part to Alexa Chung, the tomboy look has been enjoying unprecedented appeal of late. But Chung was preceded by a long line of women — notably Katharine Hepburn, Françoise Hardy, Patti Smith, Jane Birkin and Birkin’s two younger daughters, Charlotte Gainsbourg and Lou Doillon — who made stealing from the boys seem like the most stylish thing in the world.

You can also learn more about the book at Lizzie Garrett Mettler’s website.

At the other end of the spectrum, socialite Tinsley Mortimer also has a new book out, a novel titled “Southern Charm.” 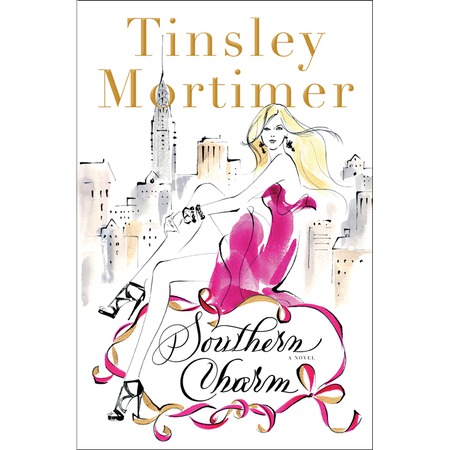 A modern Manhattan fairy tale with the sparkle of a champagne cocktail, Tinsley Mortimer’s debut novel provides a delicious peek into her world of society, fashion, and big-city fame.

But her quest for fame became grating to some. In 2009, she separated from Mr. Mortimer, which brought only more tabloid notoriety to the old New York family name — this time about his alleged infidelities and his distaste for her lifestyle.

Some readers may recall the reality show Ms. Mortimer starred in, “High Society”.

The CW via the LA Times

That foray into reality TV didn’t sit well with many, more from Lauren Lipton’s story:

Some of her peers said the separation wasn’t Ms. Mortimer’s death knell; it was the show and its supporting cast of odious hangers-on. (The series, which appeared on CW, was not renewed.)

“She was almost like a ‘Real Housewife’ — people didn’t want her at the party,” said a social acquaintance who, for propriety’s sake, asked not to be identified.

Dethroned in 2010 after a series of missteps — including a derided reality show and a separation from her blue-blooded husband — Ms. Mortimer had been lying low, mostly out of the spotlight. But those days are over.

(Forgive us, but is there a better phrase than ‘odious hangers-on,’ especially when talking about reality TV?!)

Below we see Ms. Mortimer at a book signing party in Georgetown earlier this week.

Also today, a reminder for those interested in Targét’s launch of The Shops at Target this Sunday.

The Shops at Target

The Polka Dog Bakery at Target

The Webster at Target

The Candy Store in San Francisco.

The Candy Store at Target

The Privet House from Connecticut.

The Privet House at Target

And from Aspen, the Cos Bar.

The Cos Bar at Target

This week Target celebrated the upcoming launch, below we see Emma Thompson, Lauren Bush Lauren and Mad Men’s January Jones at the gala. (Ms. Thompson’s cardigan is from the Webster collection, seen in the photo up above.)

(Our backgrounder on the collections can be found in this post.) Tilly has asked us to look at the pet dishes, she says she would really prefer something a little more stylish at mealtime. The least we can do is go look at the bowls, oui?

The Shops at Target debut in store and online this Sunday.

We leave you with a Friday Fun item, a look at two pair of shoes in the Keds for Madewell collection.

May the sun be shining on you this weekend, and happy Derby Day!