Hello-Hello, and Happy Friday. We have a fairly newsy post this morning, tidbits we hope you might enjoy seeing. The first involves Prince Harry’s visit to America. 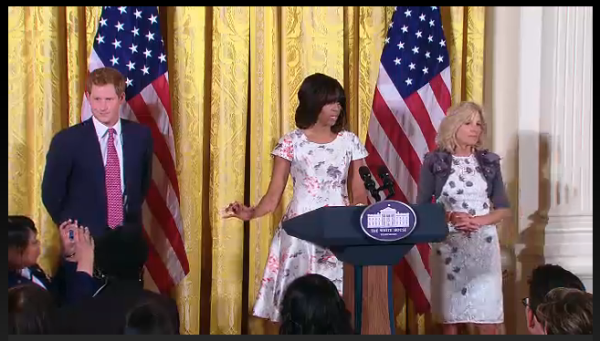 He made an unannounced visit to the White House Mother’s Day tea, surprising children of active military parents.

Harry is the Royal Patron of HALO’s 25th Anniversary fundraising efforts, below we see him visiting HALO Mozambique.

Some readers may recall Princess Diana’s involvement with HALO.

At a dinner last night Harry spoke about his mother’s work with the organization, this Express story has more:

“…at the dinner, he evoked the memory of Princess Diana’s ultimately successful campaign in 1997 to bring about a worldwide ban on landmines.

“My mother, who believed passionately in this cause, would be proud of my association with HALO.,” he said. In her special way, she adopted it as her own. She would join me – along with all of you, I’m sure – in praising HALO for the amazing work that it has done over the past quarter century….”

One of the more interesting aspects of yesterday’s events was the crowd of young ladies waiting to see Harry, more from UK reporter Richard Palmer:

From the Evening Standard:

Harrymania…crowds of girls had screamed and cheered for the Prince in Washington DC on the first day of his official tour of the US.

This morning Prince Harry went to Arlington National Cemetery. He started his visit in Section 60, this is where those who have died fighting the global war on terror are buried.

For today’s solemn wreath laying ceremony he was in the ceremonial uniform of the Blues and Royals, that is his regiment. He also wore the Army Air Corps blue beret. Harry is an Apache helicopter co-pilot and gunner, he has served two tours of duty in Afghanistan.

There was an Army Full-Honors Wreath Laying Ceremony.

A visiting head of state will pay formal respects to the sacrifice of America’s veterans in foreign wars by placing a wreath before the Tomb. Similarly, other foreign ministers may also include a wreath laying here as part of their official itineraries.

While not a Head of State, Harry is the Queen’s representative in this capacity.

Back to the Evening Standard’s story:

The grave of US Army Specialist Michael L Stansbery Jr, who died in Operation Enduring Freedom in Afghanistan on July 30, 2010, aged 21, was chosen at random out of the thousands of graves in Section 60.

The headstone of Spc Stanbery, a recipient of the Bronze Star and Purple Heart, had six stones and glass beads placed on it by family members to mark their visits. 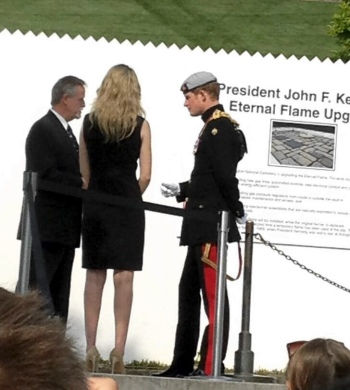 He then moved to Arlington’s Tomb of the Unknown Soldier.

Simon Perry of People magazine shared this photo, Harry saluting the Tomb of the Unknown Soldier. 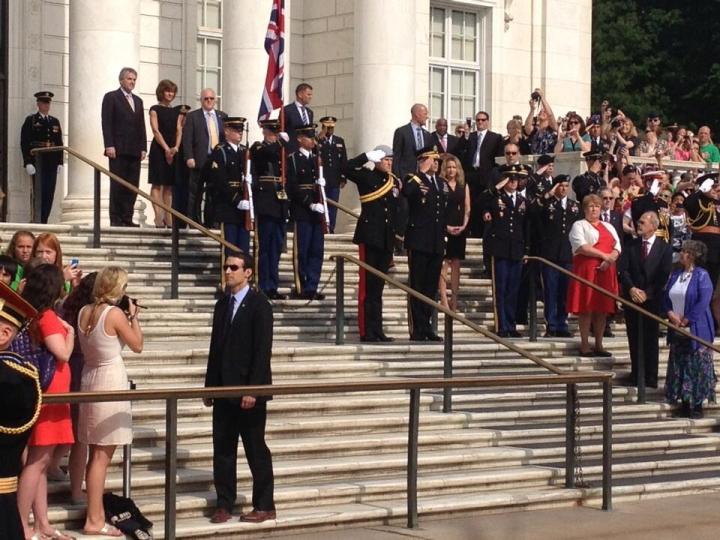 The handwritten note that was with the wreath.

It reads, “To my comrades in arms of the United States who have paid the ultimate sacrifice in the cause of freedom,” and was signed “Captain Harry Wales”.

The focus of Harry’s visit is supporting injured servicemen and servicewomen from both the US and UK, he will be visiting Walter Reed National Medical Center and attending the Warrior Games in Colorado Springs. The Games are hosted by the USOC and include teams from the US Army, United States Marine Corps, US Navy and Coastguard, the Air Force and Special Operations Command.

Our other news involves One World Trade Center.

The building is now at the symbolic height of 1776 feet, the spire atop the structure was permanently affixed by ironworkers this morning.

The skyline in this morning’s haze and fog.

We leave you with a few of our favorite looks from the Lilly Pulitzer spring/summer line. 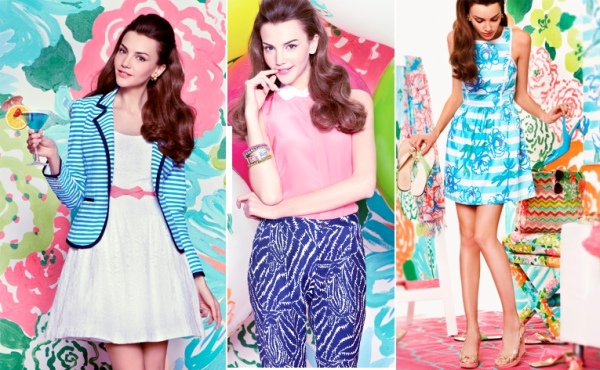 The contrasting peter pan collar on the Andria Silk Top ($138) is cute as can be, but the way the piece hangs just didn’t wow me.

You may have noticed the pretty pink belt in the photos, here is a better look at the Bow Tie Belt ($48). 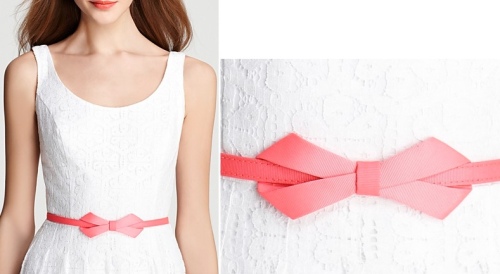 With that Pretty in Pink we say g’bye until next time!