Hello-Hello, and welcome to the work week…!

We want to follow up on our post about FNO, Fashion’s Night Out, as there was excitement in the stores and in the street with this enormous event. With the season premiere of Gossip Girl just hours away it seems only proper to start with Blake Lively, at Polo Ralph Lauren. 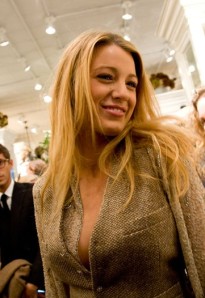 Next, the Tory Burch block party: 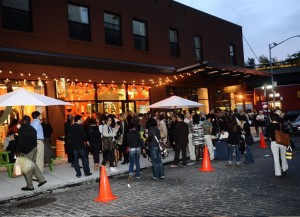 Justin Timberlake was on hand at Saks.

St. John took on a special look for what they dubbed “Studio 53,” we like the little touch of humor. BTW, St. John’s tweeds for fall are TDF, we highly recommend treating yourself to a look!

Over at Brook Brothers, designer Thom Browne helped unveil a new product for the retailer. 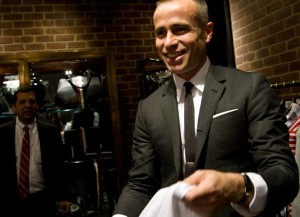 Reviews are mixed on actual sales (as opposed to shoppers) generated by the promotion, but as a stand-alone event, Fashion’s Night Out was clearly an enormous success.

Moving on to Fashion Week, there is loads to share, today we look at the Lacoste Spring 2010 RTW collection.

We simply adore the look seen above, fun, flirty, and filled of understated elegance.

For some reason we prefer Spring RTW (Ready to Wear) shows over the Fall and Winter collections, probably because we find the sunny, warmer seasons vastly superior to their cold and gloomy counterparts. 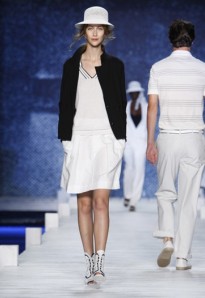 The review in WWD offers more on the Collection:

“a relaxed French sensibility — “simple, sporty and chic” according to show notes…”

Men’s styles echoed the colors and lines seen with the womenswear.

More from the WWD review:

One unfortunate men’s top was reminiscent of something generally seen on the football field. 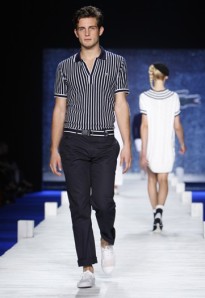 And one women’s look seemed more appropriate to the hospital OR (think surgical scrubs), but this was more a function of pairing both pieces in the same color combination, than a flaw with the basic styles or colors.

Overall we thought almost every look offered lots of possibilities. 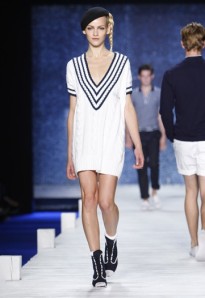 It is best summed up by these lines from the WWD review:

“The obligatory crisp whites (often with navy piping) were mixed with chambrays and whiffs of the sea via blue and green shades, which, coupled with the chic stripes and a charming dot print, lent a refreshing feel to the clothes — some of the label’s best to date.”

Much of the credit for this goes to Lacoste’s creative director Christophe Lemaire.

One quick reminder, don’t forget to enter the Great Preppy Personalized Plate Giveaway to win one of these.

Just head over here to learn how to enter. The lucky winner will choose their favorite plate or platter, personalized as they wish, and it is free.

With that we say g’bye until next time, when we take a look inside the new Tommy Hilfiger mother ship, among other things.

The crush of business prevents us nattering on as we usually do, so we share just a few items today, starting with our great Preppy Personalized Plate Giveaway here at the Princess!

We have added loads of new designs to our selection of Preppy Platters & Plates.  To celebrate the new styles we are doing a Giveaway: the winner receives a Preppy Plate or Platter of their choice, personalized however they choose!

Here is how to enter:

Some of the fabulous new designs we have in are from the good folks at Boatman Geller, including the Ashley Plaid in Pink:

If seeking something more masculine, the Ashley Plaid is available in a sophisticated blue palette. Perhaps you would prefer the Espadrille Nautical stripe brightening your table?

Our favorite new styles just might be the updated initial plates, like the Repp Tie in Cherry/Navy: 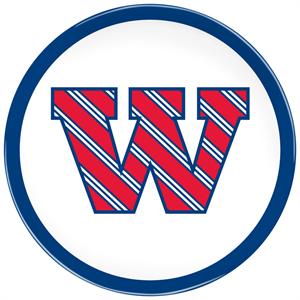 At a baby shower the whimsical Confetti Pink is fun for a little girl, but it is also offered in blues for a baby boy. (And ideal for grown-up boys and girls in your circle of friends and family!)

Frankly, there isn’t a one of these we don’t just adore as a hostess gift, or a delightful personalized present on any occasion.

Because we want you to enjoy our growing preppy dish collection and enjoy a bargain at the same time, we are offering our treasured readers a 10% discount on the Plates and Platters Collection!  Simply enter DISHDEAL at checkout to receive the more favorable pricing.  We will keep this special discount in place until midnight on the 18th.

And don’t forget to enter the Giveaway before midnight Thursday (the 17th), we will draw a name and announce a winner on September 18!

Next, last night’s big party at Saks, a gala thrown by Anna Wintour/Vogue, and Charlize Theron. The occasion was a public celebration of the retailer’s newly renovated third floor.

We love the easy elegance seen in the photo of Oscar de la Renta & Ms. Theron. Also attending the party, Dylan Lauren in a vibrant frock we shall categorize as today’s Pretty in Pink. 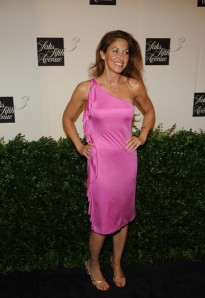 It was a very busy night for the Gossip Girls and Guys, as there was another function to attend, this one in honor of the Gossip Girl-inspired collection at Target from designer Anna Sui.

And if that wasn’t enough partying for the G2 set, co-star Leighton Meester enjoyed a screening of the Sundance Channel’s fashion series “The Day Before“. The four-part special focuses on Jack McCollough and Lazaro Hernandez of Proenza Schouler as their upscale label preps for Fashion Week. Joining in, socialite and fashionista Lauren Santo Domingo.

Preppy J. Crew Takes Another 30% Off… if their site is up.

Double blah-blah. There.  We said it. (This is just so unPrincesslike… could it be the evil twin is out and about today? Oh my!)

We apologize. This is clearly the result of some overindulgence on our part.  A bit too much gnoshing and not enough walking/running. But it is today’s harsh, cold reality here in the corner condo at the Preppy Princess InterGactic HQ.  Harrumph. Well, enough about us. How about you? Is anyone else experiencing a bit of a slump today?

One of our favorite retailers is most definitely experiencing more than a slump; it looks like an all-out crash at the J. Crew website. Here is what TP saw when checking the site throughout the day, and currently as of 5:30pm EST: 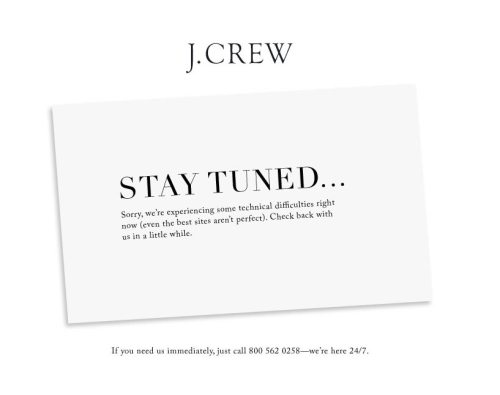 This has been the case since this morning, with the exception of one occasion when we saw the welcome screen. But that screen did carry an enticing offer:

The offer is good through December 3rd, applicable only to Sale merchandise. We offer a humble “Thank You” to the fabulous Miss LBR, one of the first to let us know about her unsuccessful efforts to place an order on the site.

This represents something of an apocalyptic event for the retailer.  We were surprised when the additional 30% off promotion popped up in the lower left corner of the screen. While it is likely a planned promotion as the company continues cutting inventory, we did have a momentary thought it could be in response to the online debacle.

We clicked multiple times on the Additional 30% Off link, all to no avail. And then suddenly, we made it to this page:

And that page allowed us to then stumble upon this utterly divine jacket. We thought, oh-my-goodness, how-darling, how-very-Princess, we-simply-must-have-it! Now! We’ll take a chance this will work! We will order the Herringbone école jacket in Mediterranean blue.

We did not order the jacket. The. Site. Stopped. Working.

It is unlikely consumers or Wall St. pooh-bahs will respond kindly to the latest technical struggles. Keep in mind that J. Crew has already spent more than $1,000,000 on customers who experienced difficulties with their site, including many friends of the Princess (henceforth known as FOPs).  J. Crew CFO James Scully told stock analysts last week about some of those expenses:

We don’t know about you, but we would prefer being referred to as “accommodated” rather than being “appeased.” The latter makes us sound like some sort of whiny, perpetually unhappy individual who had to be placated.  What do you think?

However, we speculate the Call Center is working at 800-562-0258. Call us crazy, but we can’t imagine the preppy retailer hasn’t fixed this part of the operation.

While frustrated we are superstitious enough to not say anything hyper-negative about J. Crew’s ongoing difficulties. Why? Because we are so incredibly paranoid have a little karma concern and do not want to arouse the wrath of the cybergods. Negatory. Nope. Not us.

You know how much the Princess loves her preppy dishes: Boatman Geller’s plates…along with the the platters and trays and the preppy plates from Preppy Plates… 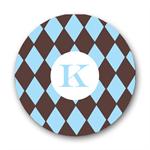 TP is sends a big “congratulations” to Preppy Plate CEO Molly Hamilton, for this stellar story in Sunday’s Washington Post; it included a cute shot of Molly and her children.

For today’s Pretty in Pink we offer the following for your perusal:

This is at Target, and only available online. The outrageous Sceptre Komodo 23″ 720p LCD HDTV is $298.

And on that cheerier note, we say adieu; we shall return with a shopping update!

At this moment the downpours are so torrential, this is what The Princess really needs:

In case you don’t receive Daily Candy where these Shuella boots were recently featured, they slip on right over your shoes and can handle almost any size heel. Umbrellas for your shoes = Shuellas.

But the weather makes us neither glum nor gloomy because we have these bright and beautiful treasures to make us smile here at the Prepatorium! 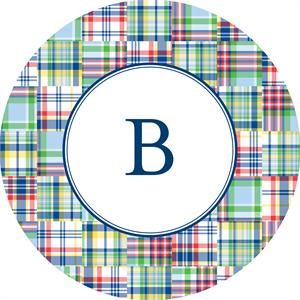 We’re not entirely sure which of these is our favorite – that changes minute by minute! The preppy plates are from one of our very favorite vendors, Boatman Geller, a name we know you recognize and respect.  We think this one will be appealing for Kate over at Nautical by Nature. 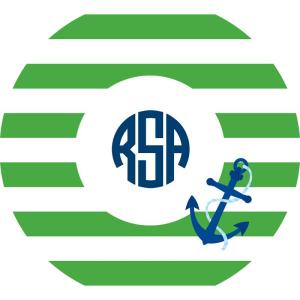 The plates are melamine and measure 10″ in diameter; up to three lines of personalization are included in the $25 price. They are food safe, and dishwasher safe, but the microwave is a no-no. 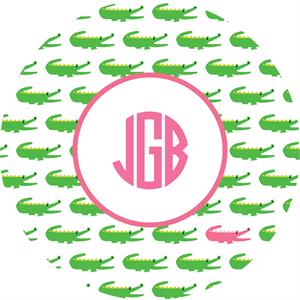 For some reason we are just crazy about the monkey plate!

Okay, back to the down and dirty of politics. Sigh.

Actually, regular readers know TP doesn’t do the down and dirty.  We try and stick to the more pleasant and often frivolous topics like today’s: Michelle Obama’s on-trend selection of J. Crew for an appearance in Jacksonville, NC yesterday. Below, a photo of Ms. Obama in Crew’s Sketchbook Roses patterned Belle skirt, followed by the actual silk taffeta piece. 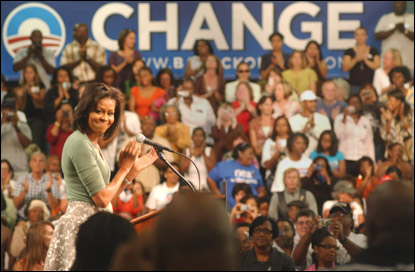 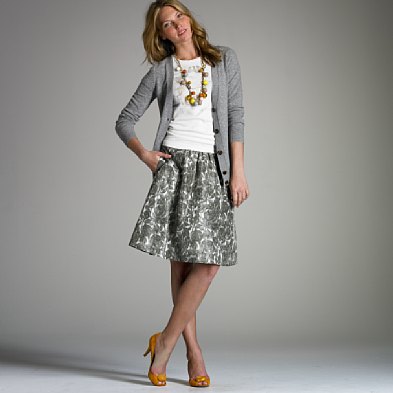 If this is a silhouette you are fond of, the cotton version of the skirt is available at varying price points online: $29.99 for the deep Atlantic blue, $39.99 for bright rhubarb pink, and $59.99 for the more sedate dark fog color and the same for the bubbly Buttercup color.

In more J. Crew news, last night the company store hosted a reading of their recently released book, “What a Man Should Know,” their light-hearted collection of 50 things on that topic. 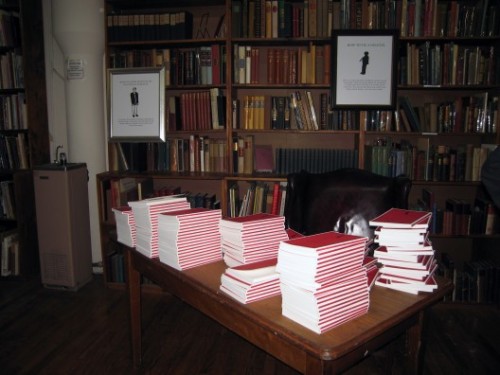 What a Man Should Know

And even more J. Crew news: it seems aggressive discounting on merchandise will continue throughout the Columbus Day holiday weekend, at least at the company’s outlet stores.  From Oct. 9-Oct. 15 there will be 30 – 50% Off all Sweaters, and during the Columbus Day Weekend sale all shirts will be reduced 30 – 50%.

In our continued effort to help everyone stretch their wardrobe budgets, we have more updates on additional discounts and sales. Our good friends at Ann Taylor are helping out as well.

The Watercolor Rose sweater is available in both missy and petite sizes at $49.99. 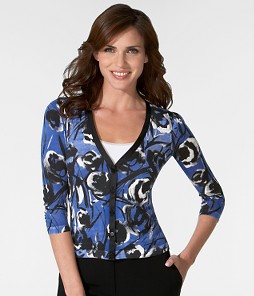 The textured tweed Wool Jacket in black is $109.99, discounted more than 60% from its original price.

Whoops, we almost forgot to mention… on top of the existing markdowns there will be another 20% off. For example, this would mean the black jacket above would be $87.99 or so.

We will be back later with more bargains!