Welcome to another wacky day here at the Prepatorium, it is one-topic Tuesday, we have a look at Brooks Brothers for spring, along with some changes for this season. Below, some of next spring’s nautically influenced styles. 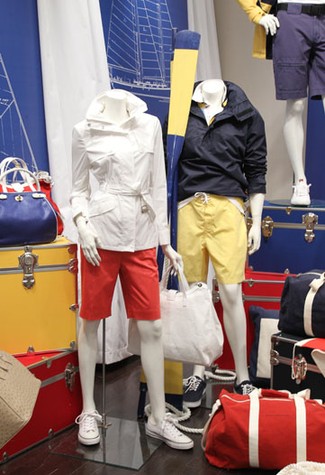 Like many other firms, Brooks does not do a runway presentation during Fashion Week, instead opting for a static presentation. 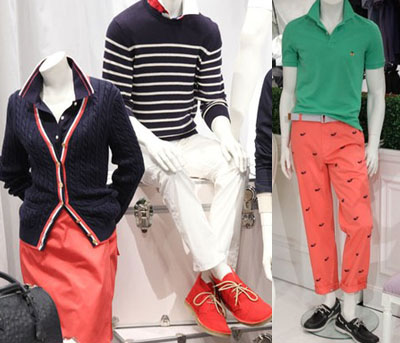 Readers may recall Brooks’ recent ventures into new venues, including collaborative partnerships with outside entities, like Levi’s (more in this post), and the Social Primer Bow Tie collection (click here for more on this endeavor), steps into new venues with items like the Mad Men suit (more here), as well as continued expansion of the Black Fleece label, with the opening of standalone Black Fleece stores on both coasts.

Women’s Wear Daily reports that online Black Fleece operations will soon be separated from the Brooks Brothers website; the launch of BlackFleece.com is expected some time in October.  More from the spring 2011 collection, we believe the following looks are Black Fleece styles by Thom Browne. 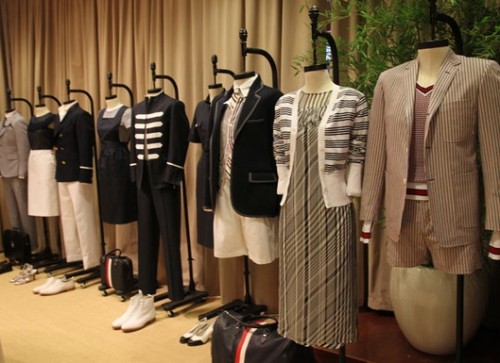 The black and tan group is particularly striking, although it is unlikely the men’s styles will make an appearance here in the Corner Condo; a little ‘too-too’ for The Consort. 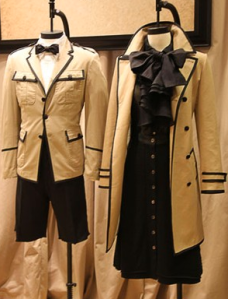 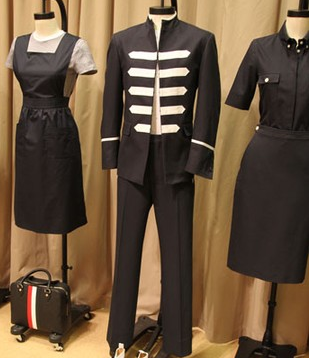 And one more group from what we believe are Black Fleece pieces. 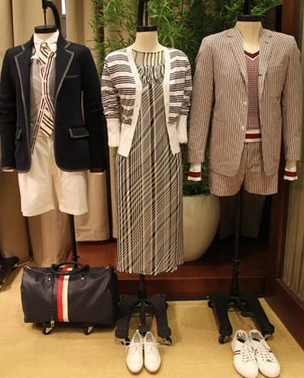 Some accessories that are very Thom Browne, his signature stripes lead us in that direction.

We move on to another specialty line, the recently announced collection to be marketed under the ‘St. Andrews Links Exclusively for Brooks Brothers’ label. 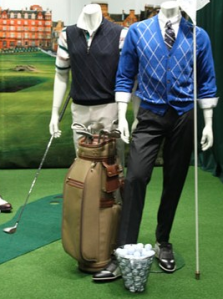 Brooks announced the partnership back in March, this is the first opportunity we have had to see any of the pieces from the new group. The long-term St. Andrews agreement names Brooks Brothers as a worldwide partner, and looking at the rather sparse offerings in the Country Club offerings online, we have put in an inquiry to see if the St. Andrews merchandise will replace the Country Club collection.

Back to spring styles in regular (non golf or Black Fleece) merchandise; we like the primary colors.

Not to mention the madras…. 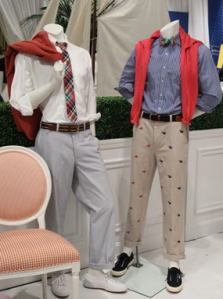 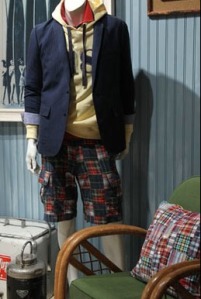 While not fond of the logoed sweatshirt, we do like the apparel in the next two images, as well as the code flags suitcase. 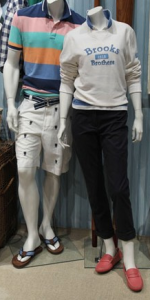 The suitcase bears a striking resemblance to one of our Preppy Pillows, the Regatta model.

Classic Brooks Brothers styling was evident throughout the presentation.

As well as updated style for the new children’s Fleece line.

This may be the most promising seasonal preview we recall seeing for quite some time.  Jean Palmierei’s story in WWD also noted the addition of three new Black Fleece fragrances, slated for a November launch.

“…there will be three separate bottles, called Red, White and Blue, which are signature colors of the collection.”

We are back tomorrow, with more grins and giggles!

Hello and Happy Friday! A few months back we did several posts marveling that so many different people and publications were alerting us to the fact “preppy style is back.” It seems the change in seasons or some other occurrence has hatched another slew of ‘preppy is cool” type articles, posts, stories, etc. Obviously this was not news back in June for most in our little online group, nor is it news now but it does provide for informative or entertaining (or a combination of the two) reading.

We’ll start with the one factor we know to be influencing fashion and style writers: Gossip Girl (or “G2” as we refer to it). The Chic Spy’s Character Dossier feature has a great story on the phenomenon this week. Below left is Serena (Blake Lively) in her Constance Billard school uniform along with Blair (Leighton Meester) in the not-really-meant-to-be-patriotic ensemble…or is it? 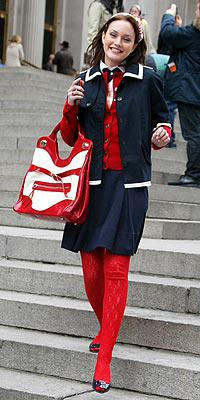 There is loads of info in the story, including a lengthy list of tips for getting your own similar look, not to mention the classic shot of ‘Chuck’ in a white suit with all the trimmings, a look that really must be seen to be appreciated. Then for fans who simply can’t get enough, US Magazine has put together an amusing series of “Before & After” photographs showing many G2 stars ‘back when…” before they gained such notoriety, and then ‘after,’ showing them now, present tense. Presumably everyone has seen the stills from the upcoming ‘catfight’ scene?

And did everyone hear that when Michael Kors isn’t busy running his clothing empire, or judging upcoming designers on Project Runway, he is doing a guest spot on the show? ‘Tis true. 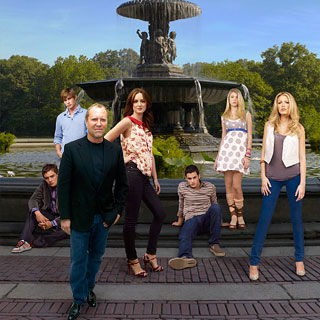 Actually, when it comes to this fall’s small-screen viewing, we’re tickled to see that “Lipstick Jungle” is making a return. We thought the show was dead and buried, a victim of a poor time slot and too many chick-flick shows in prime-time. We happily discovered we were wrong when a promo for the popped up during the Olympics.

If you missed the first season, you can catch always play catch up at your leisure; put it in your queue at Netflix, or add another dollar to the College Fund by reserving it at your local library. TP’s library has no fees for videos but we can’t say what the policies are at your local lending establishment. The NBC site says the DVD is in ‘Anamorphic Widescreen,’ which besides sounding like a pornography film, is a term no one here at the Intergalactic Headquarters of The Preppy Princess has ever heard.

There is quite a bit of news for the guys when it comes to shopping this week, so much it’s tough to know where to start. We’ll begin with the new Men’s Salvatore Ferragamo shop at the Beverly Center in Los Angeles, actually open since the last week of June or so, a beauty from the looks of things. Sleek and elegant wood, soft as butter leather couches and über-elegant Italian clothing, shoes and accessories make for a luxe look and posh surroundings. Perhaps Miss Muffy has popped in for a visit with the oh-too-wonderful Skipp, and can file a west coast report for us on the store. (BTW, this is *not* to be confused with the Mens & Women’s store on Rodeo.)

Should you be thinking ahead (always a wise move for the busy Princess) with an eye toward early holiday gift buying, there is the alligator duffel bag (center row), or the rather unfortunate shade of green alligator tote, on the top row. 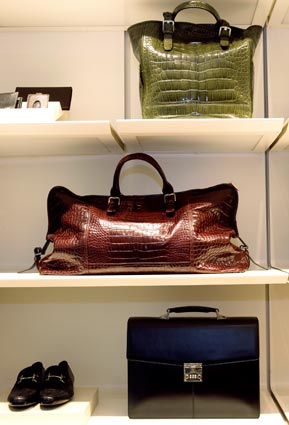 Next we visit the new J. Crew Men’s store in Tribeca that opened yesterday in the old Liquor Store location. They have done a simply splendid job blending the old with the new, right down to the exterior of the building.

For those spared the tedium of The Princess going ga-ga over J. Crew’s announced plans to open a men’s-only store and word that the old Liquor Store bar was going to be its home, well, we’ll only say this is a somewhat legendary locale, and electing to pay homage to its previous incarnation as opposed to gutting it was a stoke of genius. 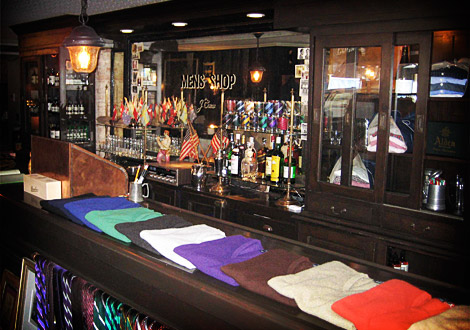 The retailer included most of its basics at the new store, as well as some of its higher-end merchandise, like its Thomas Mason fabric shirts (left), and wool Cambridge ties that are TDF. Really, they are.

They also have their new Italian Slim Suit in a color they call dark graphite that is just smashing, a classic look with understated elegance. Very nice. Any and all J. Crew fans will enjoy a wonderful little video with Senior Design Director, Frank Muytjens explaining ‘How J Crew Does Luxe for Less‘ using this suit (we think) as the example.

The store was actually designed by Andy Spade, who has his own book coming out in September. A story in Men’s Style explains more:

“The new store’s sponsoring a series of workshops based on Spade and business partner Anthony Sperduti’s forthcoming book, What a Man Should Know (available there on September 1). So what should you know? Chess, wine, and figure-drawing, among other things. It’s never too late to learn.”

There are lots of other goodies at the Tribeca shop you won’t find at other J Crew stores, like vintage Timex watches and Baracuta Coats, the latter’s Harrington G9 jacket favored by a wildly diverse group including Arnold Palmer, Steve McQueen, Elvis, Frank Sinatra and The Clash.

And to bring a smile to our preppy friends who are lovers of all things nautical, we bring you this stunning example of horological magnificence via Artfact. The 1940’s Nautical Captain’s Desk Clock is to be auctioned on the 30th, just a week from now. This is obviously what Miss Nautical by Nature needs on her desk. It would make an excellent addition to the cottage, but it’s also ideal as an outstanding gift to anyone whose heart is always with the sea. 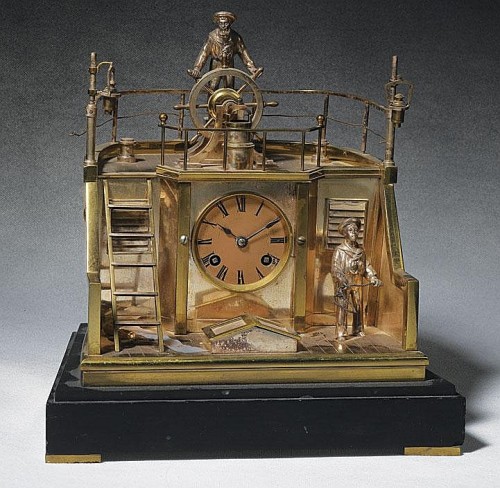 On that seaworthy note we’ll say bye for now with wishes everyone is about to embark on their own journey to a wonderful weekend. We’ll be back of course, bringing some convention fashion tidbits and US Open tales.

Warmer weather causes The Princess to drift off and dream about the water… and the beach… and sailing… and… well, you get the drift. When we saw these Topsiders, we thought they most definitely looked like they would be great for the boat. We were surprised to see that Sperry now offers a small clothing collection in addition to their splendid shoes. We kind of liked their Women’s Polo, perhaps in part because the logo is mercifully small. (It’s not our fault for being unaware of the clothing part of their offerings. Perhaps if their shoes were of poorer quality, they would require replacement sooner and we would have been looking at their website sooner!) We were very impressed with the Cotton Duffle, thinking that it might serve a myriad of purposes when it comes to summer travel, and trust The Princess, it is more than reasonably priced. A $29.99-kind-of-reasonable-pricepoint. That qualifies as completely and insanely priced, unless it is microscopically sized, and the description did not give the size. Hhhhhmmmm. Still, I would run, not walk to their website and decide for myself. 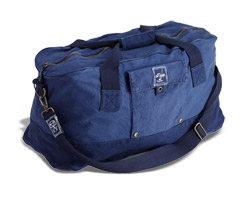 The men’s Striper Slip-on from Sperry (seen below) actually looks pretty good as well, although we did waffle for a moment or two… can’t say why for sure. Perhaps when viewing it in madras it just didn’t look right; madras is a great fabric but not right for all items or appropriate for all occasions. (There’s a topic calling for greater discussion, don’t you think?) What did look right to us for the guys was the Figawi Jacket; you can do some serious sailing in this. Oh yes indeedy. Which raises the question: why is it not available in Women’s sizing? Is the Princess supposed to buy it in a Men’s Small…hello? BTW, for those wondering what or who a Figawi is, it’s an absolutely outstanding event over Memorial Day weekend on the Cape. It’s the first big Regatta of the season, boats doing Hyannis to Nantucket on Saturday, Sunday is a massive clambake and then Monday back to Hyannis with a party after the race at Hyannis YC. It is simply a must. I think there’s a fundraiser the weekend before, also in Hyannis .

All this talk about sailing and such reminds the Princess of one of her favorites: the Regatta Collection of pillows. These are some our favorites – bright nautical flags on an eggshell background, some with solid colors on the reverse side, many with contrasting piping for an elegant accent offsetting their whimsical motif. So if you can’t make it to Figawi, why not try these? If not for yourself, perhaps as a Hostess gift for your next visit to Skip & Octavia’s thsi summer? at 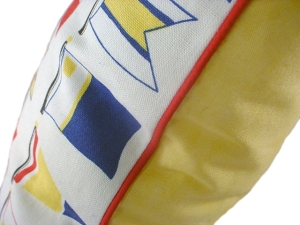