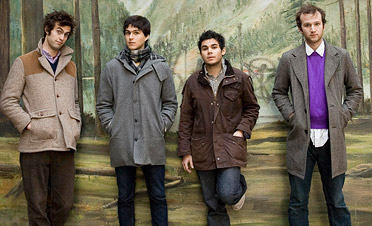 Welcome to another day at the Prepatorium, where we must acknowledge our lack of familiarity with the primary subject of our post, the preppy pop-rockers Vampire Weekend. (Other than our previous post about the band back in April of this year.)

At any rate, their current music video, Oxford Comma, again shows them in their standard fare of buttondown shirts, polo shirts, chinos, jeans, and even a cardigan sweater. The über-preppy former Columbia students worked on their next music video over the weekend and apparently this one is a little different thematically from the previous three. The song they are doing the video for, Cape Cod Kwassa Kwassa, has lyrics referencing Louis Vuitton and Benetton, among other things.

The boys in the band and a whole lot of other folks spent part of the weekend shooting the video on the Jersey shore. According to a report on the VH-1 website:

“the longest shoot we’ve done” — they were decked out in standard-issue VW gear: Polo, Lacoste, Sperry. Even I rocked J.Crew threads. But not for long.

Quite the look, don’t you think? If you are not familiar with the lyrics to the song, here they are, compliments of MetroLyrics.com. Should you desire ringtones, hypothetically you acquire them free at the site.

Is your bed made?
Is your sweater on?
Do you want to
Like you know I do

But this feels so unnatural
Peter Gabriel too

Can you stay up
To see the dawn
In the colors
Of Benetton?

But this feels so unnatural
Peter Gabriel too

The group has not yet played anywhere on the Cape; when doing their story, MTV asked about that and here’s how they wrote it:

“It doesn’t look like it’s gonna be this summer, and in some ways that serves them right,” Koenig said. “Because we tried last summer for Cape Cod but, you know, nobody wanted us at the time. We hope to get there at some point.”

C’mon, P-town, Wellfleet, Hyannis — get it together!

Now since we mention Benetton, TP just had to pop into their site, which still is not shoppable online. Honestly. However, once inside and comfortably grazing, look what we found:

All we can tell you is its name, the Beatle, and that it is available in four colors: fuchsia, black, lime, and orange. It also comes in four different sizes. The Princess is absolutely transfixed by it. Translated? Whilst in the big city by the large lake this week we may need to go hunting for it and its siblings. There is nary a word about the material from which it is made in the non-descriptive description on Benetton’s site, so really, we’re merely going on an investigatory mission. Nothing more. Honest.

Anyone here enjoy the music of Vampire Weekend, or at least like them enough to defend them to the end? We’ve not yet had the pleasure of seeing them in person, but through the magic of the internet we were able to listen a little today and were somewhat nonplussed.  Our only link to the band comes via a columnist at the Sun-Times (Chicago), who suggests they are ideally suited to be the “Official Preppy Band.” This via a blistering story, or perhaps a review, in the paper Friday entitled: “Look, Muffy, a band for us” with a subhead (2nd headline) “Preppy pretension sucks musical blood out of VAMPIRE WEEKEND.” Okay then. Did I hear “Bitter, party of one?” from the maître d’ blogLand?