2012 Preppiest Colleges (Ahem) and We’ve Gone to the Dogs

Hello-Hello, welcome to a Wednesday.

It’s that time again, the Huffington Post has announced its list of the “Preppiest Colleges in the US,” here is more from the story:

Being a preppy person isn’t all about knowing how to sail and wearing sailing clothes. Anyone in the world can be preppy, if they just want to try it!

(Is it just me, or does this conjure up images of an unruly gang of little children following a leader as he/she exhorts, “C’mon everyone, let’s all go be preppy!”…?)

Back to The List, here it is, each school name is followed by a snippet from the story:

Here at the Prepatorium the most surprising thing about the story was in the ‘Bama description:

“For those Alabama fans feeling like they don’t look enough like a prep in their U of A gear, PreppyPrincess.com has you covered with a line of aprons, tote bags, and cloth napkins.”

Eek! Our thanks to the kind folks at HuffPo for the mention. 🙂

It would simply be easier to name the school from the 2011 roster that is also named this year, there is only one: Virginia. However, in the interest of providing context, here are the 2011 schools not making the 2012 list.

As always, the comments are more-than-interesting. Click here for the post in its entirety, scroll way down for comments.

We begin with a group shot as the Beagles do their thing in the ring.

There’s always a reminder of that old adage about dogs looking like owners…or something.

Back to our point: it isn’t easy being beautiful. Below, Bentley’s coiffure is kept pretty while he waits his turn in the show ring. 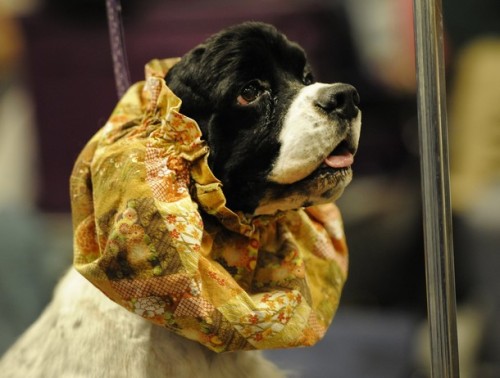 Ever fell like the day was a total waste of hair spray? How would you like to be a Komondorok? (In reality, this is precisely how this breed’s coat should look.)

The Consort: “That’s a heap of hair.” 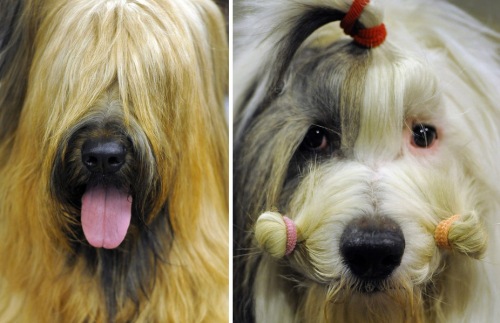 Maybe life is easier if there just isn’t as much hair to worry about.

In some cases the dog is almost as big as the handler, as with Nikki, the Old English Sheepdog seen below left. On the right we show Ian, a Dalmatian, in honor of Karky and Kermit, and Uncle Bruce.

In honor of the inimitable Muffy Martini (actually, in honor of Bitsy and Bandit) we show Cinders, a wirehaired dachshund who was the big winner in the hound group. That photo on the right isn’t nearly as bad as it might appear, the handler is actually reacting after the group judge awarded Cinders that title.

Sometimes it’s tough on the humans too.

And you thought it was easy on the handlers?

This year’s big winner is Malachy, a Pekingese, taking the Best in Show title.

At times it’s hard to keep your cool.

Why, she’s still waiting for her invitation, that’s where she is.