Happy-Happy Friday everyone, and may the sun be brightly shining upon you as we approach a respite from the frenzy that somehow took over the week.

We begin with news of the next designer collaboration for Le Boutique Tarzsay, aka Target.  The hip discount retailer is partnering with Carlos Falchi for a line of handbags in jewel tones like plum and teal, crafted of faux-snakeskin.

For those unfamiliar with this designer, we share a few current offerings from the upscale designer’s current collection, not associated with the upcoming Target line. 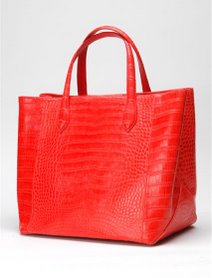 This will be Target’s eighth limited edition handbag collection; the line is slated to be available from Oct. 11 to Dec. 27.  Fashionistas can still purchase pieces from the company’s current collaborative effort: the Felix Ray for Target collection remains in stores until June 14.  (Pssst – several styles from this group are on clearance!)

Just to ensure we have a Pretty in Pink today, here is another piece from the current Carlos Falchi collection.

Falchi can be found at most of your standard stops: at Neiman Marcus, Saks Fifth Avenue, eLuxury and Zappos.

Big doings for Burberry yesterday in honor of the company launching their new Madison Avenue headquarters.  In fact, Mayor Bloomberg officially decreed it Burberry Day, and we’re sure readers will not be surprised to hear there were plenty of posh people celebrating such an amazing (ahem) and august occasion.  Many of the usual suspects were party circuit regulars popped in, or at least made sure to visit the red carpet area leading into the bash.

Actress Blake Lively from TV’s Gossip Girl was on hand,sharing her sentiments on what her favorite Burberry fashion is:

“I just live in my Burberry trenches,” Lively said about the fashion company’s signature coat.”

Indeed. Ms. Lively wasn’t the only G2 star on hand, co-star and real-life paramour Penn Badgley also made it to the festivities. 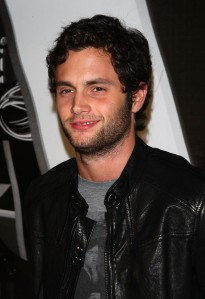 The pièce de résistance for Burberry execs was the unveiling of the company’s logo high above Madison Avenue: 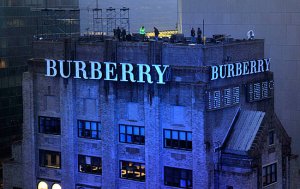 While poking a little fun at some of these functions we don’t want to overlook a seriously good thing occurring in tandem with Burberry’s move into its new US digs. The company is putting $500,000 from their newly established Burberry Foundation into projects geared toward teens.

Some may remember a bit of our incredibly tedious pontificating post discussing the “Business of Preppy,” as we call it. We have an update for J. Crew, who released financial results for the quarter in a conference call with financial analysts yesterday. While things are still not good at Crew (profits down a whopping 33%), they were better than hoped.

One of the benefits of the earnings reports is the accompanying information that looks at future plans.  In today’s WWD story (Women’s Wear Daily, subscription req’d.) on J. Crew’s financial performance some of CEO Mickey Drexler’s insights and plans for the future are revealed:

According to the story, Mr. Drexler indicated more J. Crew Collection and J. Crew Menswear stores are possibilities, saying he scouted locations this week in San Francisco and Los Angeles for such additions. And how does the retail and branding whiz kid feel about the overall situation?

“In a very perverse way, the bad environment was a big wake-up call. I kind of like it. The customer has become so much more acute and educated about buying goods.”

Good for Mickey, we have always admired his tenacity.

Because we want to end on some Friday Fun, we close with a quick peek at an addition to our Lilly Pulitzer Stationery line: the Lilly Party Pack.

If buying all of the items separately the cost would be $61.50, a more-than-fair and reasonable investment IOHO (but of course, we are biased!).

But why spend all that when you can snag everything you need in a Party Pack while lowering the cost to a mere $52.50! 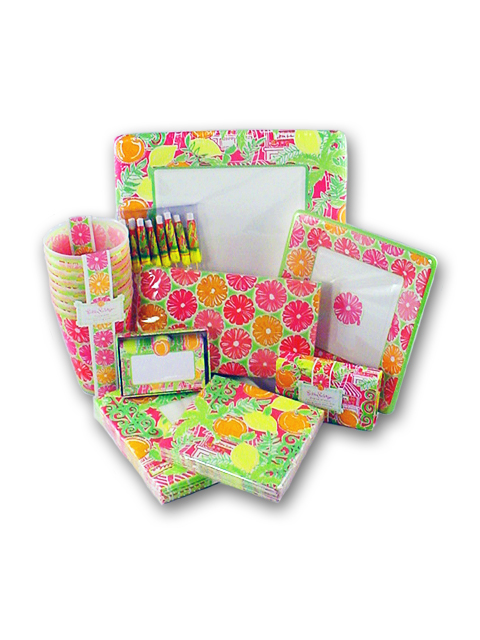 Let Lilly and the Princess do some of the work for you with a Party Pack!

With those sunny images and bright colors we say sayonara until next time. And whether contemplating weekend activities that are lush and languid, or fast and furious, we hope you can savor each and every minute.

Whoops!!! In our fervor to pop into the sunshine we almost forgot to mention Prince Harry’s visit to the city today and tomorrow’s big goings on!

The Veuve Clicquot Manhattan Polo Classic will feature some faces you may be familiar with:

This would be Nacho Figueras, arguably the best polo player in the world, captain of the Black Watch Polo team. He is also the face for Ralph Lauren’s Black Watch fragrance; Mr. Lauren sponsors the Black Watch team, and also sells limited edition apparel adorned with the team’s logo and Mr. Figueras’ number “2”.

The match this Saturday is destined to be great fun, pitting the Black Watch against another team featuring a famous face:

This would be Prince Harry, who also knows his way around and atop a polo pony. A news release on the event explains the ultimate good purpose behind the gala goings-on:

HRH has already made his first official stops, posing for a photo with firefighters:

On his way to placing a wreath at Ground Zero.

This is the first official visit to the US by the Prince, his first as a child was technically considered a private event.

To view any of several videos showcasing the Black Watch, Mr. Figueras and the Polo fragrances he fronts, click here.