“The Princess Principle”, Blake Lively Gets Carried Away & Petunia the Preppy Pig

Hello-Hello, and welcome to a Thursday here in the corner condo at the Prepatorium, where we are buried in work, so today’s post is ever-so-short.

Today we share news of multiple Princess appearances that we thought you might enjoy, beginning with Her Serene Highness, Charlene of Monaco. She and Prince Albert have been on this side of the pond, below left we see them at the Princess Grace Awards gala Monday and the opening of the “Grace Kelly: From Movie Star to Princess” exhibition in Toronto last night.

The Awards honor emerging talents in the arts, including film, dance and theater. Below we see the Monaco royals with Dame Julie Andrews, who received special honors, and Anne Hathaway, both of whom actually played princesses on the big screen.

The exhibit in Toronto doesn’t open to the public until tomorrow, but it looks impressive.

That exhibit features many of the late Princess’s original dresses, including a special look at her wedding gown.

How dreamy would this one be to visit in person? Field trip anyone?

Also out and about yesterday, the former Kate Middleton, now formally known as the Duchess of Cambridge.

She and Prince William were in Copenhagen, hoping to draw attention to the crisis in East Africa. They joined Crown Prince Frederik and Crown Princess Mary for a visit to UNICEF‘s warehouse, it is the organization’s supply chain headquarters.

The couple is taking a page from the Brangelina playbook as noted by Lisa on Twitter yesterday. 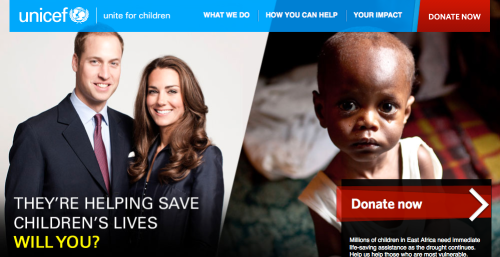 Their capacity to do good by shining a light on specific causes and needs is substantial, their first such endeavor is the East Africa Crisis, where malnutrition and starvation have reached epic levels. (If interested in more on the visit, our sister blog is What Kate Wore.)

We leave this segment with a snippet of a piece in the Times last month, “The Princess Principle”

Every woman has had a princess moment in her life. But even if most of us have put away our tiaras, we still want to feel like princesses, or even queens, when we get dressed.

The piece by Jessica Michault was written in conjunction with fashion week, but it certainly has merit for many, no? Is the “Princess Principle” something that rings true, or is it passé in this day and age, simply not realistic in the hectic, crazy-busy real world?

Our final tidbit involves Christian Louboutin and Gossip Girl star Blake Lively, below we see her being carried by the shoe maestro at Tuesday’s party. (Note the rather… ah, ‘strategically placed’ handbag. Yikes!) 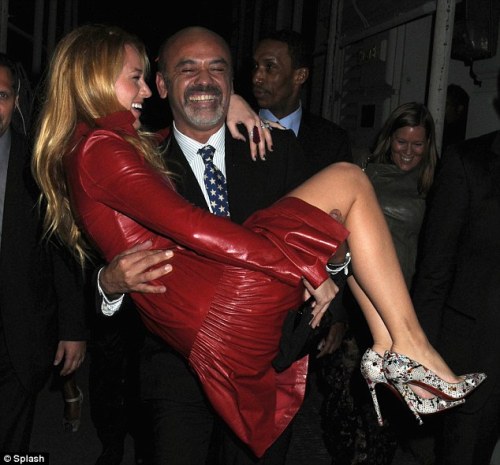 That was at was the big do at Barneys celebrating the shoe designer’s 20th anniversary and book launch.  Below, the limited edition pump being sold exclusively at Barneys, the ‘Highness 160’. (We are trying to stick with that royals theme, after all.)

It is a very limited edition indeed, only twenty pair are being sold. If interested, hold onto your pocketbooks, they are $3995.

We leave you with a seasonal item from an upcoming holiday; meet Petunia, I am calling her the ‘preppy glass pig.’

Petunia is just one of many handmade glass Christmas ornaments at Artful Home, we may showcase others moving forward. Doesn’t everyone need a pink and green pig? 🙂

Frequent readers know we are prone to veering off the straight and narrow at times, detouring from Brooks Brothers Avenue and Talbots Lane to another road altogether, taking a peek at brands with classic pieces but perhaps lacking a prep pedigree.

In our look at not-so-common brands we have two offerings today, beginning with Katherine Hooker.

We enjoy the designer’s Ascot Dress. 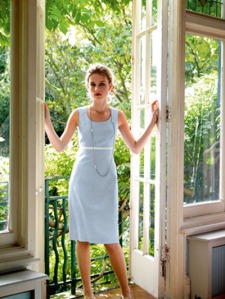 We are also fond of these two looks; the blouse looks simply exquisite. 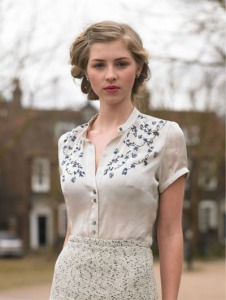 This designer is primarily available in the UK, although Ms. Hooker has done trunk shows stateside.

via The Irish Times

“This is exactly the kind of preppy attire I would dress myself in, if I weren’t entirely committed to wearing dresses and floral fabrics 24/7…” 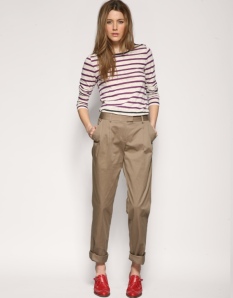 Courtesy ASOS via The Irish Times

This retailer already offers online ordering to the USA, but reports are the process will be made even easier in the near future.

We have a number of Bits & Bytes to share:

Today’s Pretty in Pink…and Green comes to us via the always-on-top-of-things folks at the Pink and Green Scene.

It really is the ultimate sleeping bag for one crazy for pink and green, let alone a great Adventure in Argyle as well! The bag is simply adorable.

Finally today (with apologies to our FB fans), we close with one of the best cross-country tours we’ve seen:

That would be the giant-sized official LL Bean boot, heading out of Oklahoma as we type, on its way to Indianapolis.  We are more familiar with the boot in this setting.

Pop over and visit the Bean Facebook page to see the whole story about the Boot Road Trip.

We just want to know if there are tee-shirts with all of the tour dates listed on the back, like those seen at rock concerts…?

On that note, until next time!

Monday Musings: Liz at QVC, In the Pink

Hello-Hello, and Happy Day to all, especially those enjoying a day off, a little respite from their normal schedule!

We must begin by sending great good wishes, big smiles, hugs, prayers and lots of love to two of our favorite bloggers who started on a new path this weekend….

Congratulations to the one and only Muffy Martini and Daisy JD (Just Daisy), they married the loves of their lives Saturday. 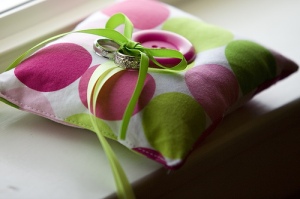 And now they are off honeymooning, whoo-hoo! (Note: photos are not from either wedding.)

Moving on, big news for anyone who enjoys Liz Claiborne:

The line is being moved exclusively to Penney’s. Both the men’s and women’s labels are making the move; if things are going well after five years, Penney’s can even buy the name.

Liz Claiborne New York, moves to QVC and the company’s outlet stores.  The WWD story on this notes something TP has wondered about for some time: the perils of watering down a designer’s caché by creating multiple labels sold in similar stores.  As the firm’s CEO, William L. McComb, put it:

“It was time to break the conflict inherent in the strategy that had a lower-priced offering of the Liz Claiborne brand at one department store in the mall [Penney’s] and a higher-priced version of it in a department store across the mall [Macy’s],”

This brings comparisons to American Living, the Polo Ralph Lauren brand sold at Penney’s. Below, a fashion look and a table lamp, both from that collection. 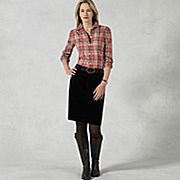 It’s unlikely there is much brand dilution with this line; most retailing insiders believe the line really bears little resemblance to standard PLR merchandise.

Other retailers have done well with designer collections specifically for their customers, such as the Simply Vera by Vera Wang and Dana Buchman lines  at Kohl’s, and Tommy Hilfiger is now sold only at Macy’s or Hilfiger stores.

From a big picture perspective this also allows the Claiborne company to focus more attention on several brands many readers are familiar with: Kate Spade, Lucky Brand Jeans, and Juicy Couture.

We have a few more Pretty in Pink things to share, starting with an extra cute pair of Keds.

The Keds Champion Pink Ribbon sneaker benefits the Breast Cancer Research Foundation – the company is donating 100% of proceeds to the BCRF.

Speaking of shoes, how about these Ragg Kids Puppy for infants and toddlers?

Or these Bibi Kids Laceups, also for infants and toddlers?

If TP and the Consort had been blessed with human children we would be bankrupt; every single cent would be spent on shoes for the little ones, they are simply too cute!

Because of the chilly temps outside, we have to share the Pink Funnelneck coat from Old Navy. 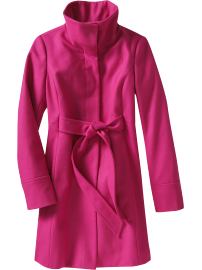 We leave with a look at the next generation Armani phone.

It does look sleek and elegant – dare we say understated? 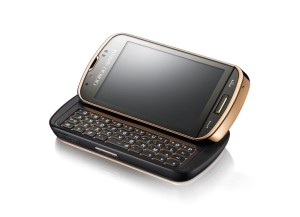 However, we’re more than content with our iPhone tucked into its shocking pink case and we also have a greater understanding of just how easily one might become addicted to dependent upon the technology.

Until tomorrow,  we send smiles to each and every cherished readers!

Hello-Hello, and happy day everyone!

We start with a nudge on a must-read story in the Times for fans of the styles seen in Mad Men and/or Gossip Girl.  Friday’s story looks at the costume designs for popular television shows, including interviews with Gossip Girl’s costume designer Eric Daman and Katherine Jane Bryant of Mad Men.

““He’ll walk around the Hamptons in a beautiful mint-green suit and a bow tie if he feels like it.””

Is there a better representation of Betty & Don Draper doing formal apparel?

We highly recommend the story and accompanying interactive photo piece. Below, some of the Mad Men cast backstage at the Golden Globes earlier this year.

Mad Men aficionados may be intrigued by this story sharing the compromise reached in the ongoing hoo-haa over adding two minutes of commercial time to the hit show when it returns this August. (The 16th of August to be precise, but really, who’s counting?) A wise decision it seems, the two minutes are added but the content is not curtailed; the show will run into the 11pm hour a tad.

And in a final Mad Men note, the show’s style is invoked in this brief review of the new Liz Claiborne Men’s Line.

“The debut collection combines the slim cuts of the Mad Men era with classic preppy pieces–narrow polos and cardigans, bermuda shorts in madras, and two-button jackets.”

This is the first menswear line created under Isaac Mizrahi; it is created by a designer of whom we are fond, the gifted John Bartlett.

We also have a few SOTTs (Signs of the Times) to share: 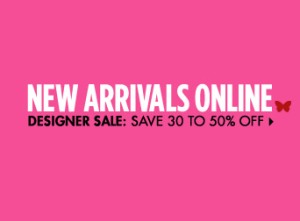 In other Sales & Savings news, Lord & Taylor’s Friends and Family sale offers an “Extra 25% Off Almost Everything,” with “10% off Cosmetics and Fragrances.” Use the promo code FRIENDS at checkout.

And J. Crew has decided to throw in Complimentary Shipping with their Extra 20% off promotion.

Yes, they call it Free Shipping, but TP refuses to use that term; it isn’t really ‘free’ by our definition.  It is complimentary, or included, or no charge, but not free. (Ooooh, do we have a reappearance of Crankenstein Princess?!) The promo code remains the same, EXTRA20.

And to continue our tedious whine-athon, we’re curious to know if anyone else finds it almost laughable/borderline offensive when a retailer puts an item “on sale” by taking approximately 13% off the original selling price? The issue came to mind with the Crew Perfect-Fit Short-Sleeve tee:

We don’t mean to unfairly pillory J. Crew, and we adore the tee, there are more than we care to think about a few here at the Palace.  Nor is J. Crew the only company pursuing what seems an insane practice, but 13% barely covers the sales tax in some locales these days. Can someone help us understand?

Okay enough of our insanity, it’s time to perk up with a few Pretty in Pink items, our first from Polo Ralph Lauren, also holding a sizable Sale and Clearance event. 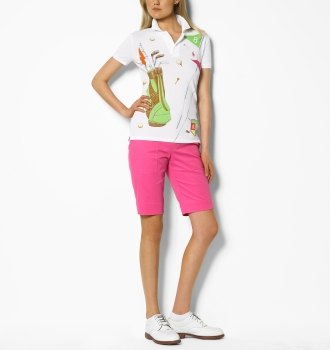 The Fairway Print stretch polo is now $69. While not for us, the shorts hold potential. (This could be attributed to our Logophobia, but it seems a high proportion of the womens items we surfed had the logos-on-steroids issue.)

The second is a discovery by our good friends over at the Pink and Green Scene:

The letters are just too cute, available at The Company Store.

Happy hunting, if that is your task today! Until next time, g’bye.