Hello-Hello, today we have some Friday Fun, delving into the details of the impending Royal Birth. 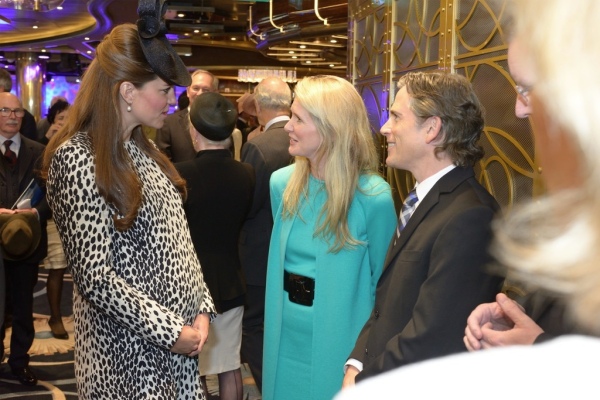 Many readers are aware a certain Duchess is expecting a baby, said to be due in mid-July. (Yours truly thinks it might be a bit earlier than that.) Above and below we see Kate on June 13, she was officially christening the new Royal Princess cruise ship.

This week the Palace shared some information about how news of Kate going into labor and the birth will be released. And it won’t be on Twitter. More from the Daily Mail:

Although both Buckingham Palace and Clarence House have their own Twitter accounts on which details of royal events are frequently now broken, it will most definitely not be the preferred medium to announce the new royal baby.

Instead a formal notice on a piece of creamy A4 size Buckingham Palace-headed paper, signed by the medical staff who have assisted the Duchess, will be brought out of the Lindo’s front entrance by a press officer.

It will then be handed to a waiting driver and driven through the streets of London – escorted by police outriders – to the Privy Purse Door at the front of Buckingham Palace.

Sadly, I must report we do not have a Privy Purse Door here at The Prepatorium. Ahem.
The notice is then placed on an easel.

It will be the same easel used to announce Prince William’s birth. Coincidentally, the Prince’s birthday is today, it was 31 years ago Princess Diana gave birth to him. Remember this? 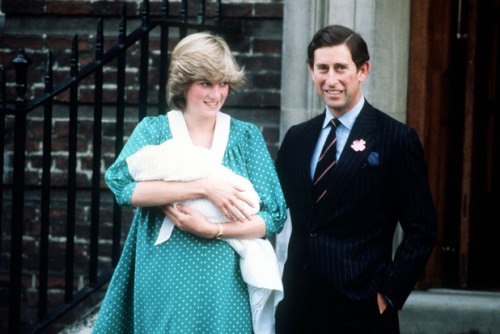 Kate will deliver the baby in the Lindo Wing of St. Mary’s Hospital, the same place where Diana had Princes William and Harry.

Back to details on how the news will be shared with the world, from the Daily Mail.

‘We wanted to retain some of the theatre of the notice. It is quite important to us that this is done properly and with the degree of dignity that the event demands. This is the birth of a child who will be in line to the throne. It is a rare occasion and it is nice to be able to do it with some historical precedence,’ a Palace spokesman said.

It can’t be easy. Being an expectant mother has to be hard enough without all of the added pressure of carrying a child who will be third in line to the Throne. Below you see media outside the hospital earlier this week, in a photo shared by Paul Harrison of Sky News. 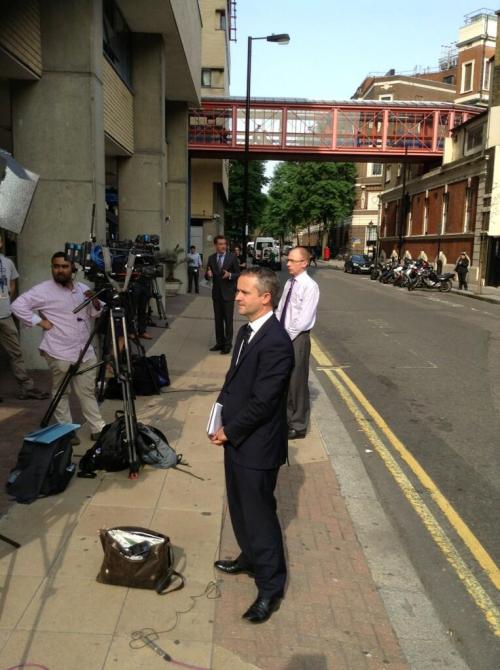 Kate has done an admirable job coping with a pregnancy monitored by the media and followed throughout the world.

Above we see the Duchess leaving a church service at Westminster Abbey last week, with thanks to Sarah Campbell for kindly sharing her photos. The Palace will even alert the media shortly after Kate is admitted to the hospital, an unusual move.

While palace aides are keen to retain Kate’s ‘dignity’ as a woman in labour, they acknowledge the fact that social media such as Twitter will make it almost impossible to keep her admittance a secret unless she is smuggled in.

‘While it is a deeply personal and private event, the Duke and Duchess of Cambridge realise this is a time of national celebration and that there will be vast interest in the baby. They realise many people will want to share in their happiness,’ a spokesman said.

And when will the baby be seen for the first time by those outside the hospital? From People magazine:

The first time the baby will be seen publicly will be when the happy couple pose for pictures on the steps of the hospital in west London. It’s possible that they will also be able to say the name, but that could also follow in a few days. William’s name was released several days post-hospital and Harry’s was revealed as his family left St. Mary’s.

The plans are certainly indicative of social media’s impact, as well as the lightning-fast with which information moves around the world.  Another view of Kate in quasi-maternity wear, this one from late April during a visit to Naomi House, a children’s hospice. 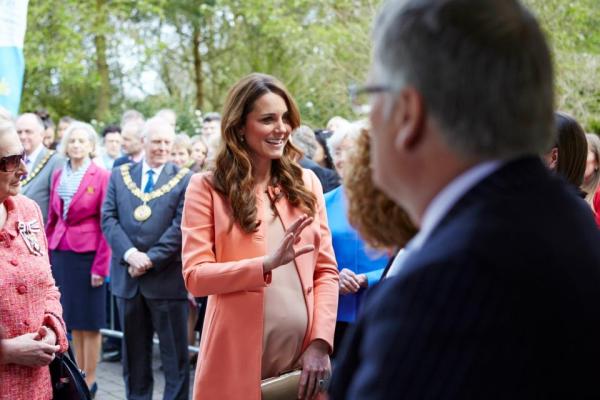 Until next time, may everyone enjoy a splendid weekend!