Thank. God. It’s. Friday. The Princess is clinging to a parapet here at the Palace, a tad frazzled from a whirlwind week consumed by too much travel and too little time with family. Sigh.

Perhaps news of a sale (imagine that, a sale on Labor Day weekend!) at Polo Ralph Lauren on their oh-so-popular Olympic Collection will prove to be a style-starter for you this holiday weekend. It appears all of the merchandise from both the Opening and Closing Ceremony Parade Uniform lines is marked down. This includes the Big and Tall sizes in Men’s, as well as the ‘Custom,’ polo shirts (which are not custom made, for heaven’s sake), cut closer to the body for a trimmer fit.

Styles like this Olympic Games Gold Medal Polo are available in Men’s, Women’s and Children’s sizing; below we show the Women’s version. 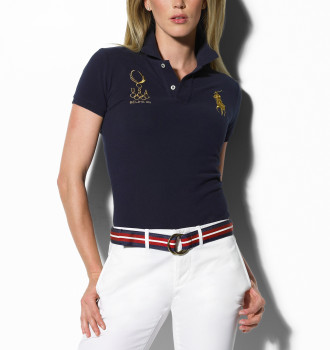 Should you be looking for a little treat for the Princess or young gentleman of the household, there is no shortage of Olympic apparel in those sizes from which to choose. The Girls Olympic Games Track Jacket might provide a delicious snuggle factor with the chill nights of Fall approaching; it is available in Sizes Small to Extra Large and comes in two colors.

It’s expected the markdowns, although at only about 20% they are not deep, will help move some of the merchandise. Naturally some of the line simply won’t sell and TP has her picks for those items most likely to hit the bargain bins at one’s local discounter of the TJ Maxx or Marshall’s variety.

For example, we don’t envision too many Moms successfully locating the Olympic Games Beret on the head of any young man in the Boys Size 2-7 and Boys 8-20 age groups. Actually, we don’t foresee any age group of either sex donning these of their own free will. The Princess was fond of the berets; they were a great look. However, the operative word in that sentence is “were” in our humble opinion. 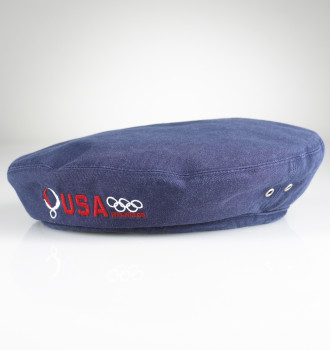 Now a case could be made on behalf of the Olympic Games Sport Cap, a far more attractive proposition on a number of fronts if I am said Boy. (Or Girl, or anyone else.)

The style appeals to a much broader group and is much easier to wear. No peering about self-consciously and asking friends “Do I have this on right?” as many are wont to do when first wearing a Beret. Also, the price point is much more appealing for what most perceive as “dated” goods. Originally $20 for Boys 2-7 and 8-20, the Sport Cap is now $14.99; the Beret was $40, now $29.99, a substantial difference.

We do adore the sneakers (officially referred to as the Closing Ceremony USA Sneaker) on their own merits and hope to procure a pair for twinkletoes as soon as humanly possible. Below we show the Men’s sneaks. 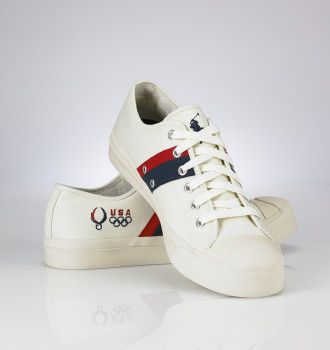 At the very least, it never hurts to pop in and visit the folks at Polo Ralph Lauren for a few minutes; one never knows what may be discovered.

BTW, we had a request from the always-wonderful Momx2; she is seeking information on the dress Chelsea Clinton wore for her appearance at the Democratic convention Wednesday night.

Unfortunately dear Mom, we are of no assistance whatsoever: we couldn’t locate anything! We did find out that Michelle Obama’s dress was by Thakoon Panichgul, and is part of the designer’s pre-spring 2009 collection, so obviously it isn’t available for purchase. 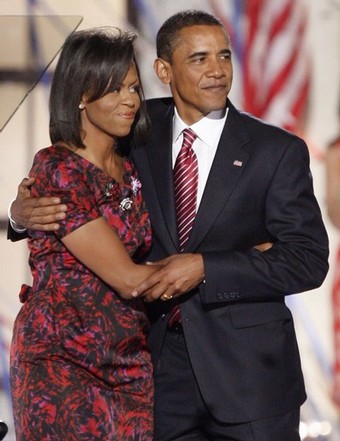 If Thakoon’s name sounds familiar, it might be because he is one of the designers Target has doing a collection for them for its Go International initiative, similar to Cynthia Rowley’s earlier this spring or Rogan Gregory’s. The Thakoon line is due in Target stores in December. Momx2, we’ll keep trying on the Chelsea dress, which we also liked.

BTW, not that it’s TP’s decision to make, but for a campaign that has been somewhat ahead of the curve in its exploitation of technology, they need to grab the reins and create a Michelle Obama website. One all about Ms. Obama. Or separate and specific pages on the Obama site, not simply something one scrolls down to as part of the family page.

Now everybody knows it’s tennis time with the US Open continuing this weekend in Queens. What people may not be as familiar with are some of the following photos from the tourney, preceded by an installment of “It’s Just Not Done” which you may have already viewed on TV or in your local paper. It’s that notable in its poor sportsmanship.

This is what was left of Eduardo Schwank’s tennis racket yesterday after his match with Dmitry Tursunov of Russia. TP understands (oh, how we understand!) personal frustration on the court, the green, the slope, wherever. But. There are standards of conduct. One does not resort to infantile displays of temper regardless of the arena. It’s just not done.

Now, that is reaching to return a shot! Jelena Jankovic of Serbia makes *every* effort in her match today against Zheng Jie of China. She may have been blinded by the red Adidas tennis shoes sported by Ms. Jie, seen below. 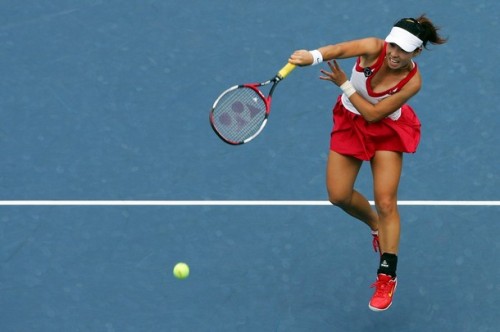 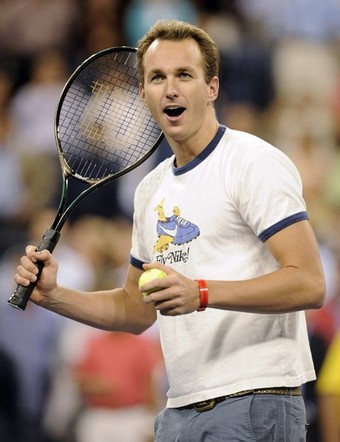 US Olympic gold medal swimmer Aaron Peirsol dropped by yesterday, and did not look like a fish out of water, not at all.

On that note, we’re off for the weekend, but may be able to pop in briefly via modern technology. We hope so!