Olympics Special Issue: What are they Wearing? Plus New Ralph Lauren Olympic & “Create Your Own Flag Polo”

Hello-hello and happy Thursday to everyone! The Princess remains flabbergasted by the fact the Opening Ceremonies for the Olympic Summer Games are tomorrow. Barely 18 hours away. And the summer went where…..? 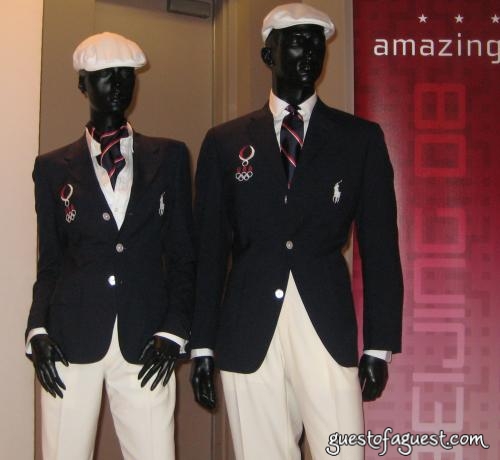 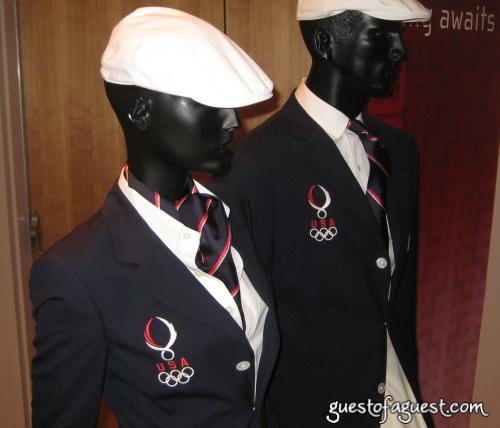 … we thought it might be fun to peek at some of the other uniforms being worn. However, before we do anything else, there are some recent additions to the Polo Ralph Lauren Olympic Games Collection online site that may appeal to you, including the new “Create Your Own Flag Polo.” 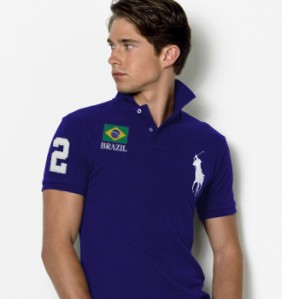 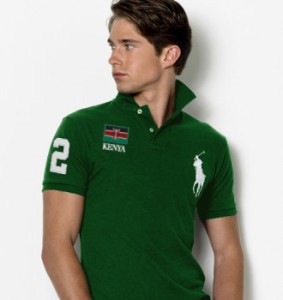 This process works almost identically to that used for simply ordering a standard “Create Your Own” product in any other group, be it an oxford shirt or a Men’s tie. Below are just a few of the flags offered; there are more than thirty that we counted available in this line.

Once again, these do not appear to be offered in Women’s sizes. Ahem. Apparently one must determine the closest approximation in a Men’s sizes, cross their fingers, and hope for the best. It’s somewhat challenging to “…Wear your pride in a style all your own..” if the shirt isn’t sized for the ‘fairer sex’ to start with. Harrumph. (Ooooh, did we just see Crankenstein Princess poking her nasty head out of her horrid little cave?!)

Another Ralph Lauren Olympics fashion update: it appears you can now purchase the same belt the US Team will wear with their uniforms for the Closing Ceremonies. 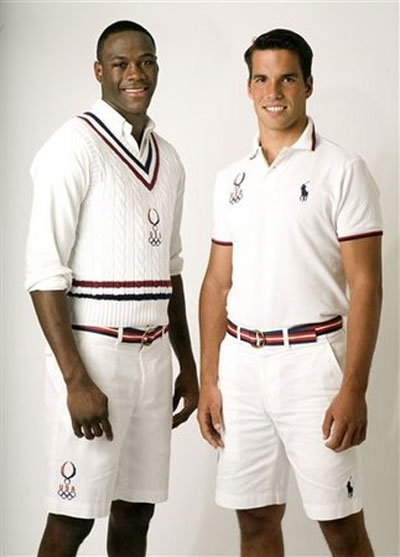 This is the red, white & blue striped grosgrain belt at Polo Ralph Lauren, and TP can’t actually tell if it is offered separately in both Men’s and Women’s sizing. 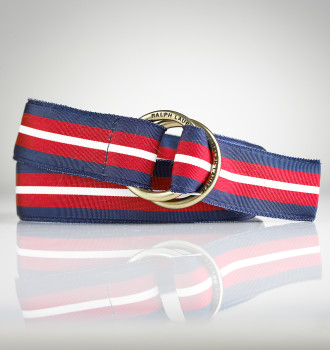 Recently introduced to the Ralph Lauren Men’s Olympic Games Collection is the Men’s Passport Polo, seen below. You can select from Japan, Russia, Great Britain or the United States for your shirt. 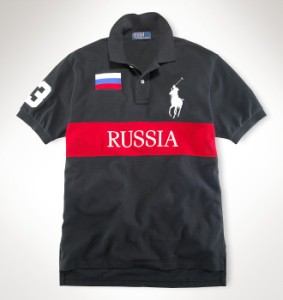 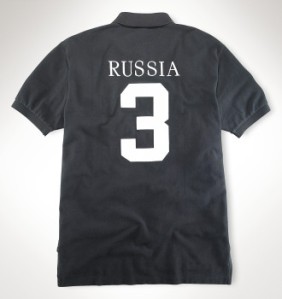 Our memory isn’t entirely clear, but we don’t believe we featured (or even mentioned) the Big Pony Flag Polo for Men in both the Slim and Classic fit; this is the one with the national flag on the back with the number ‘3’. One may select from several countries other than the USA, including two colors for England and one for the UK, Italy in both green and blue, Japan in Black, Korea in red, and others. 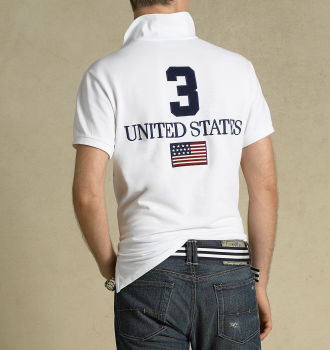 Now on to some uniforms. Let’s start with China’s outfits for the Opening Ceremonies. Oh my. Where does one start? 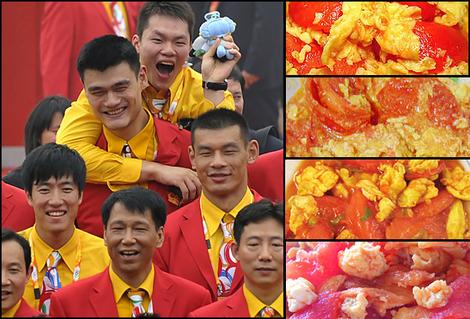 The uniforms were revealed last week, and met with an almost universally negative response; some of the harshest criticism coming from within China’s own borders. The colors mirror the country’s national colors; many are calling these the “tomato scrambled egg” uniform, referencing their likeness to the popular Chinese food dish. (See AP photo montage above.)

Yao Ming has been chosen as Flag Bearer for the host country, but still no word on who will light the torch. If Yao looks familiar, it’s because he plays in the NBA with the Houston Rockets. For those not familiar with Yao, this is a human being with an extraordinarily generous heart who has made substantial donations to multiple philanthropic endeavors. Most recently Yao gave a not-insignificant donation to assist with Chinese Earthquake relief. We are a bit confused because in the photo below Yao’s uniform is red with a white shirt, while in the other shots of the oh-so-bright uniforms the colors are obviously red with yellow. (Have you heard who has been selected as our flag bearer?) 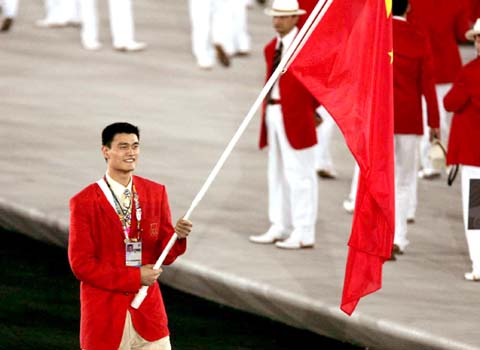 Here are the USA Track & Field uniforms… how cool are these? Wow! As you can see from the swoosh, Nike is responsible for their creation, and they have that distinctive graphic look in a rich blue. Beneath, the Chinese Track and Field Team uniforms. 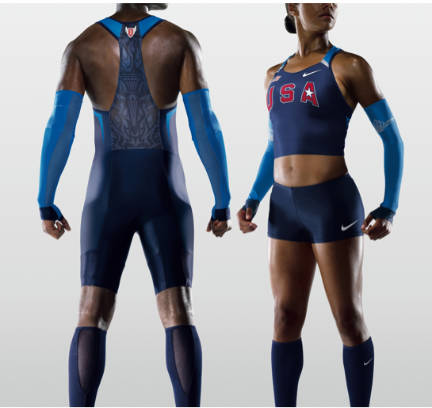 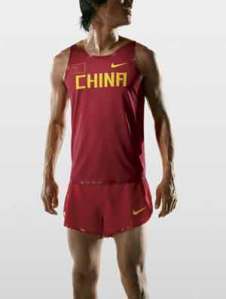 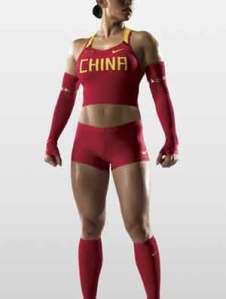 These days with the sneaker craze it’s simply not possible to talk about Olympic uniforms without looking at some of the shoes the athletes will be wearing. Behold the Nike Dunk Gyrizo Men’s BMX Shoe. Don’t tell anyone, especially not The Princess Consort, but we do lust after it. Ssshhh! Yes, I know it’s a little over the top, but the red, white and blue are appealing to my patriotic side. A shame it only comes in men’s sizes as best we can tell. Sigh. 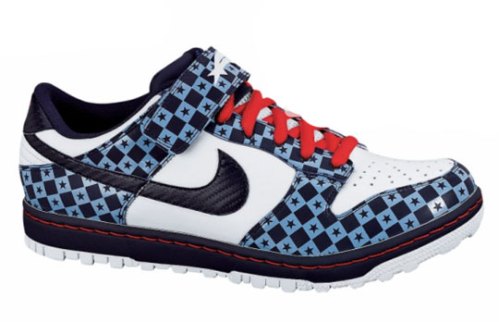 Next we move on to the Team USA Basketball look. 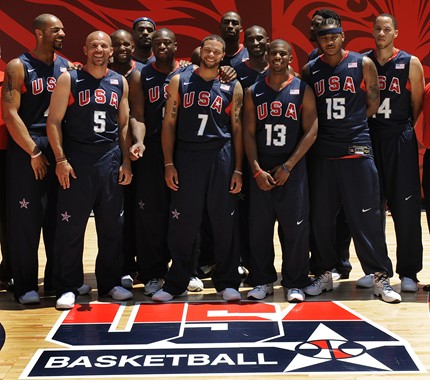 This next shot doesn’t show us uniforms, but it does show the the US Women’s Olympic Basketball Team finish their huddle before practice Thursday in Beijing. 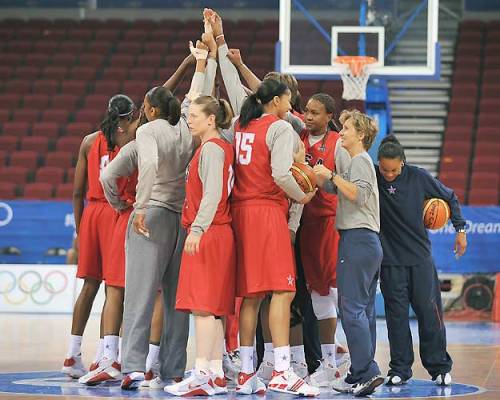 Here is a quick shot of the Australian Team’s Opening Ceremonies style with what appear to be classic lines, and heels for the women. Of course, heel height (or lack thereof) is always a topic for chatter during the evening whilst watching the Parade of Athletes. 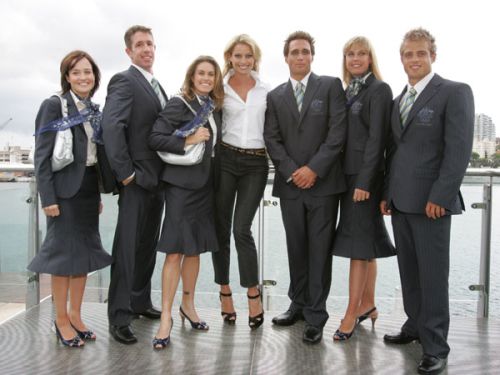 Below we have a shot of Team USA as they enter the Flag Raising Ceremony yesterday. Now despite all of the minders and ministrations and memos and scurrying about it seems someone participated in an event carrying an item clearly not from one of the major sponsors. Oh no! Did we all spot the errant Burberry bag? It appears to be what we call a messenger bag, possibly the Men’s Haymarket Messenger, if we’re not mistaken. 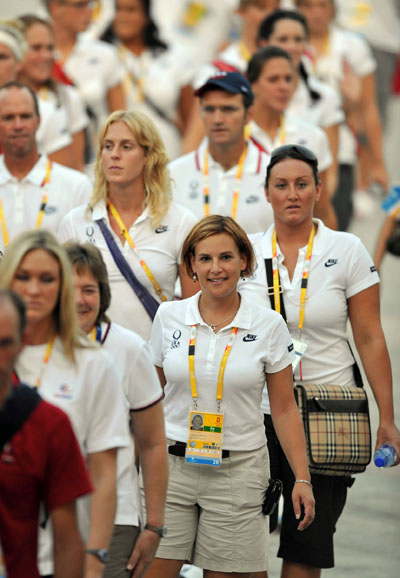 This is the part in those TV medical dramas where the paddles are applied to the victim’s chest and a matinee idol scans the room, then bellows authoritatively “Clear!”

At the very least have Nanny remove the children from the room, then consider having that conversation with the teenagers about the hazards of speaking loudly in public. About political issues. And be advised The Princess is about to engage in the unthinkable here, at least it would be unthinkable at any social gathering we hosted, and that is how we view our little online get-togethers.

But honestly, things seem a wee bit out of control. We can natter on about uniforms and fashions and heels and colors and all of that; you know and I know it is intended to be nothing more than nonsensical fun.

However…if anyone still wants to criticize some members of the American cycling team for wearing their masks getting off the airplane, they might want to take a look at this shot from an ESPN reporter, taken Thursday, Beijing time: 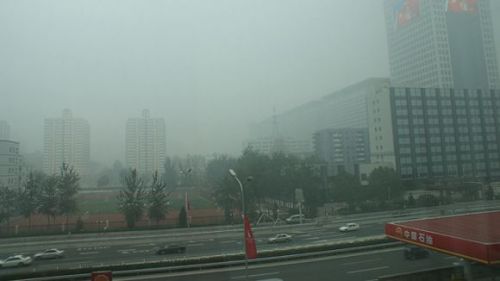 Yet what did US officials do? It seems they helped the cyclists decide the air was not as bad as they thought it was and they Did. Not. Need. Those. Masks. Presumably that would make the apologizing for wearing them all the easier. Here’s a portion of the story’s coverage in the Times:

They were the first athletes at these Summer Games seen wearing masks publicly to combat the effects of pollution, and the sight of them drew considerable attention and criticism from United States Olympic officials.

This must be the USOC’s version of a wardrobe malfunction, or worse.

Granted, Tuesday’s air pollution was not as bad as it was in the photos of Thursday’s air seen here. TP asks the question: how bad is it supposed to be? We looked for a non-biased view in the matter and  selected a UK viewpoint from the Times (of London) in an online story yesterday about Tuesday’s incident. This is as best TP can calculate the International Dateline! (Oh where is The Consort when he is *really* needed? On the back nine, that is where.)

Four US Olympic cyclists who caused an outcry when they arrived at Beijing airport wearing smog masks have today apologised to Games organisers.

As the Chinese capital remains shrouded in smog today, Jim Scherr, the chief executive of the US Olympic Committee, revealed that the four had said sorry.

“It probably wasn’t the most opportune time for these athletes to wear these masks,” he said, adding they had written an apology to Beijing Olympic Organising Committee (BOCOG).

Here is another photo of the air quality from ESPN’s Arty Berko: 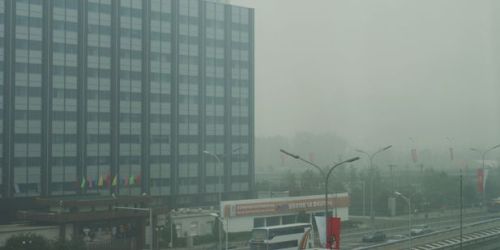 Here is a statement from an official with the Beijing Organizing Committee:

“We have all along said that it is not necessary for the athletes to wear masks because the air quality in Beijing has improved,” Sun said. “We have to explain that looks can be deceiving, and that it looks like fog, but actually the air quality is good.”

You know, I always feel so much better when someone else helps me grasp this sort of thing. TP is truly beginning to feel like she’d best have Cook mix up a Prozac Latte. (On the rocks. With one of those little umbrellas.) More from the NY Times.

“They told us that the Chinese were mad and that this is a politically charged issue, but we didn’t mean to offend anybody,” Friedman said. “When they handed us these masks, they never said, ‘Here they are, but don’t wear them.’ ”

If you really want to get your blood boiling, go to the USA Cycling home page to read the Statement from U.S. Cyclists Michael Friedman, Sarah Hammer, Bobby Lea and Jennie Reed. Seriously.

For a great perspective on an “average Joe” exercising in the air seen above, check Will Pavia’s story in the Times of London.

This is the Princess Consort stepping in to restore some semblance of order to this situation. It is rare to see The Princess so exercised. I happen to have a close chum marching in the Opening Ceremony Parade and I’ll get some back-channel information from him. Until then, I must apply a cold compress to my lovely bride’s forehead. Enough for now.