About Those Party Frocks at the Golden Globes

Hello-Hello, welcome to a bright and beautiful day here in The Great Midwest.

Did you watch the Golden Globes last night? We did not, being consumed with personal chores and then Downton Abbey, so we were forced to rely upon Twitter and then today’s newspaper and blog stories for updates.

It seems one of the big trends last evening was the number of nude or blush pink gowns, evidently there were quite a few more than one normally sees.

Reuters/AP/Reuters/Getty via The NY Times 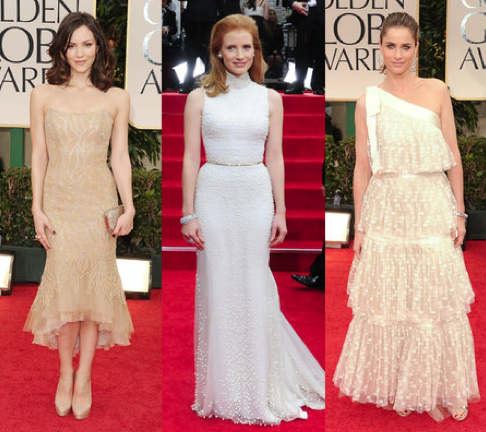 Via The NY Times

In more pale hues, Nicole Kidman in Versace (many commentators thought she was a contender for ‘Best Dressed,’ I agree), Heidi Klum in Calvin Klein, it was Gucci for Jessica Alba, and Kate Beckinsale opted for Roberto Cavalli.

AP/Reuters/Getty/Getty via The NY Times 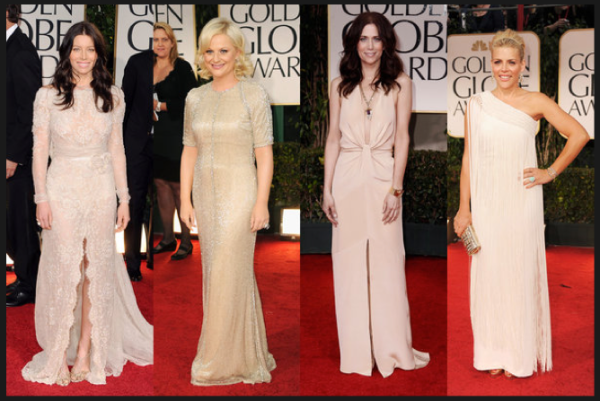 Getty/Getty/AP/Getty via The NY Times 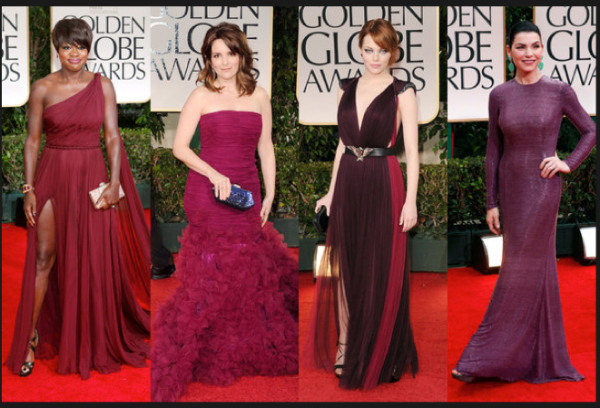 There were also a lot of blue hues.

And yellow made a big splash, Paula Patton wore Monique Lhuillier, while both Maria Menounos and Mireille Enos were in Naeem Khan.

There did not seem to be unanimity on who was the ‘worst dressed,’ although Sarah Michelle Gellar managed to land in that category on a lot of lists.

Her tie-dyed Monique Lhuillier gown was widely panned, above we also show it as seen on the runway. From Jen Chaney’s Washington Post piece:

She told E!’s Giuliana Rancic that her daughter chose this tie-dyed gown. That explains it.

Ouch. Coco’s Tea Party was a little more gentle in its assessment:

But the LA Times disagrees:

Sarah Michelle Gellar’s blue-and-white ink splotch Monique Lhuillier ball gown, which she said her 2-year-old had a hand in picking out, was another unconventional choice that paid off.

As did Tom and Lorenzo:

“We hate the big ponytail she was sporting but we kinda dig this dress for being bold and eye-catching.”

Perhaps the most polarizing gown was Piper Perabo’s, described by the aforementioned Jen Chaney this way:

The mysteries of the universe may well be hidden under that skirt. Lord knows there’s plenty of room. 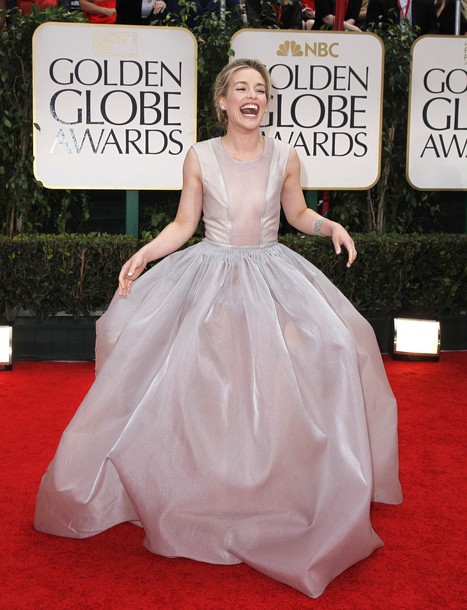 I didn’t find the Theyskens’ Theory dress to be at all awful. Perhaps it was a little more sheer than what we’re used to seeing here at the Prepatorium, but it wasn’t ghastly.

The UK’s Daily Mail place Kelly Osbourne atop its worst dressed list, they (and many others) did not think highly of her Zac Posen gown.

But two of our faves, Tom and Lorenzo, disagree:

It was maybe a bit much for a job that mostly consisted of sitting down, but we like the shape and the color on her. The hair, not so much.

Others thought Madonna deserved that appellation for her Reem Acra dress, back to Jen Chaney’s WaPo column: 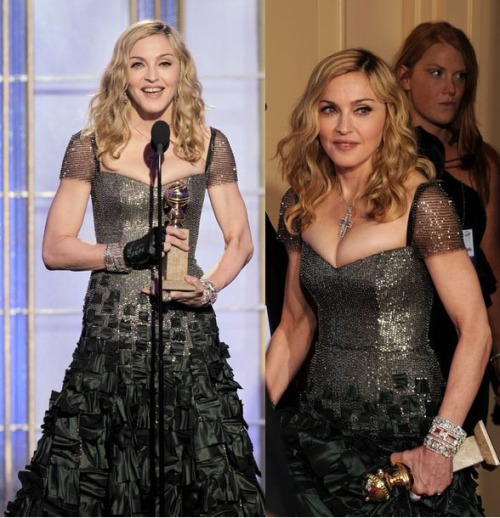 Perhaps this is the point where we should mention the story (with photos) about smushed…ahh, squashed…well, just click here and you’ll see the story about those who appeared to have almost crushed a certain part of their anatomy. (Ahem.)

There were oodles of compliments for Claire Danes in her J. Mendel dress.

Cathy Horyn made a number of legitimate points in her review about the evening’s styles:

Quite a few actresses had hems spilling wildly behind them — Charlize Theron in a creamy Dior, Kate Beckinsale in a beaded Cavalli number. Fishtail dresses were definitely a trend on the Globes red carpet, but each time the camera panned down to them, the viewer seemed to end in the same old puddle.

And though Rooney Mara was probably the most fashionable young woman on the carpet, with a black cut-out Nina Ricci dress and her sleek ponytail and minimal makeup, the dress also didn’t fit her as well as it should have. What was that puddle at her feet? 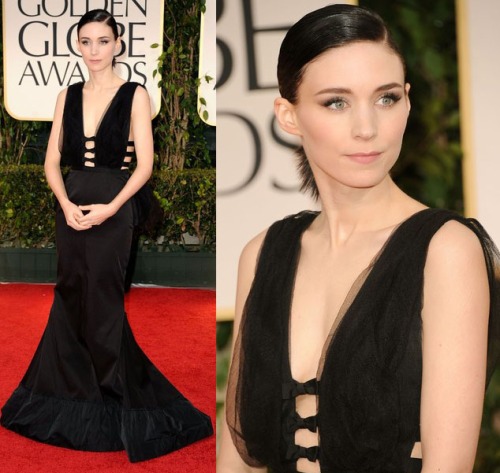 While there seemed to be almost universal agreement that Angelina Jolie was the smash hit on the red carpet, some liked Nicole Kidman, as mentioned above.

Back to Tom and Lorenzo:

This paraded across our screen before we could see who was wearing it and we were shocked later to find out it was Nicole simply because she’s so va-va-voom in it. This is a knockout; best she’s looked on the RC in ages.

Back to Ms. Jolie in Versace Atelier.

A better view of the actress’s look via Grazia UK.

The most overwhelming commentary about Ms. Jolie referenced her weight, many said that the actress has become ‘scary skinny.’  An online post quotes a recent Us Weekly story:

The U.N. goodwill ambassador, 36, who travels the globe meeting the poor, ‘puts herself on fasts to make statements for the children she visits.’ She says, ‘If they can’t eat, I can’t eat.’ The busy mother of six ‘does different cleanses from around the world. It’s very dramatic, but that’s how she gets.’

Of course Ms. Jolie is also included on those lists of ‘power couples’ at the awards, below we see three such pairs via The Times. 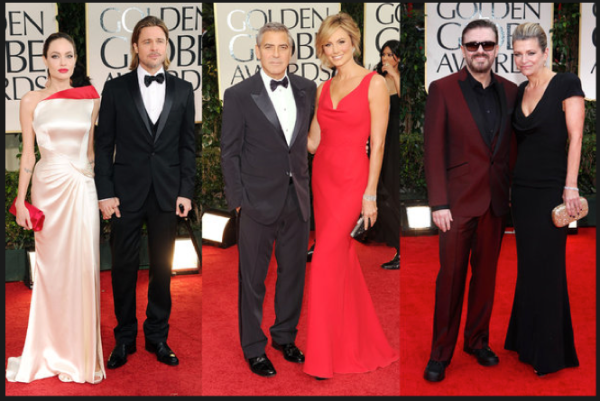 For those keeping track, Brad Pitt wore Salvatore Ferragamo, George Clooney was in Giorgio Armani and his date, Stacy Keibler wore Valentino, on the far right host Ricky Gervais was said to be in Ted Baker at one point, Jane Fallon looks to be wearing a black version of the Pippa Middleton bridesmaid gown by Alexander McQueen.

All Getty Images via The NY Times

We’ll close with Natalie Portman, we thought she was definitely Pretty in Pink.

And to think this was merely a warmup to February 12th’s Grammy Awards, followed by the Academy Awards on February 26.

One related story we wanted to mention looks at the very big business of jewelry on the red carpet.

It comes by Brink’s truck and is hand-delivered by security guards.

For last year’s Academy Awards, Tiffany & Co. reportedly paid Anne Hathaway $750,000 to wear Tiffany jewels onstage while she was hosting the event. And Gwyneth Paltrow was rumored to have picked up a $500,000 paycheck to wear pieces from Louis Vuitton’s L’Ame du Voyage fine jewelry collection.

Booth Moore’s piece in the LA Times sheds light on the inner machinations involving upscale jewelers and their gems, celebrities and their agents, and the deals they make during awards season.

Filed under preppy, Pretty in Pink