This Just In….the Next Target Collaboration & And Inaugural Party Frocks?

Well, for heaven’s sake – if news isn’t breaking out all over the place this election evening!

We quickly interrupt your election updates to share a few preppy news alerts, starting with the a look at what Michelle Obama plans to wear this evening.  With the Obama campaign clearly hoping tonight’s event in Chicago’s Grant Park is celebrating a victory, in this piece from the Journal’s ‘Heard on the Runway‘ blog we learn about a possible wardrobe selection for Ms. Obama.

The blog showcases a conversation with Maria Pinto, one of Michelle Obama’s favorite designers:

“For Tuesday, Ms. Pinto has a dress in mind that she hopes Ms. Obama will wear. The dress, a coral-red silk crepe sheath with three-quarter sleeves, an empire waist and a high neckline with a burst of sunray pleats emanating from the collar, is a piece that Ms. Obama bought a few months ago but hasn’t worn to an event yet.”

And as far as a dress (more appropriately, a gown) for a certain date in January, should Ms. Obama need a party frock? The designer told reporter Cheryl Lu-Lien Tan “…she’s already begun sketching an Inaugural Day look in her head.”

“Something bright in color, with some movement,” says Ms. Pinto, declining to share more beyond that. “I just did costumes for the Joffrey (Ballet) so I have dance on the brain.”

While Ms. Obama has made no mention of an inaugural dress, über-star Oprah Winfrey has, calling in to a radio show this morning and sharing the following:

“So help me God, I am looking at it right now…. Actually I started in February. I was speaking with Michelle [Obama] and Caroline Kennedy and Maria Shriver — we were all doing a big rally out in California. At the end of the rally Michelle Obama said something powerful, ‘and I want you to leave here and envision Barack Obama taking the oath of office’…. I created a vision board. I had never had a vision board before. I came home, I got me a board and put Barack Obama’s picture on it and I put a picture of my dress I want to wear to the inauguration.”

In a different story the paper profiles the designer; we show these pieces as photographed by Jens Mortensen for The Wall Street Journal.

Also tonight, word on everyone’s favorite mass-market retailer, Target. The company is expected to  announce its collaboration with high-end designer Alexander McQueen in a move fashion insiders consider to be the most notable of all Target’s collaborative efforts.

Above, a suit from the McQ by Alexander McQueen line. The Target collection will be closer to this in look and feel than to the regular Alexander McQueen line.  The designer’s McQ group is not entirely unknown to Princess readers; here is an August post featuring ‘Nouveau Prep’ looks, including this McQ fringed skirt at Bluefly in blue, red and black. (Pssst…it is now on sale!)

Next we show the McQ Dotty wool jacket at Net-a-porter. 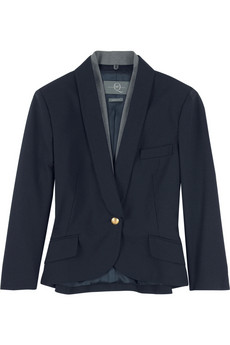 The fabric for this piece is a lush and lovely wool with a soft hand and beautiful drape.

The McQueen collection will be part of a larger initiative from Target, an effort the retailer is calling ‘Designer Collaborations.’

While the often edgy and frequently racy designer isn’t TP’s style, we do think this one will be just oodles of fun!