A New Member Named to the AntiPrep Wall of Shame

How happy are we all that it is Friday? Really a very silly sentiment, particularly when one considers the holiday-shortened week, honestly.

This is definitely a “when it rains it pours,” situation; we go weeks without any Gossip Girl news and then suddenly it seems we have almost-daily happenings! Today we share updates on two of the show’s more notable stars, seen Wednesday at the gala hosted by Valentino at Château de Wideville, the retired designer’s home.  Women’s Wear Daily covered the festivities, below we see their photo of Blake Lively with Gwyneth Paltrow. 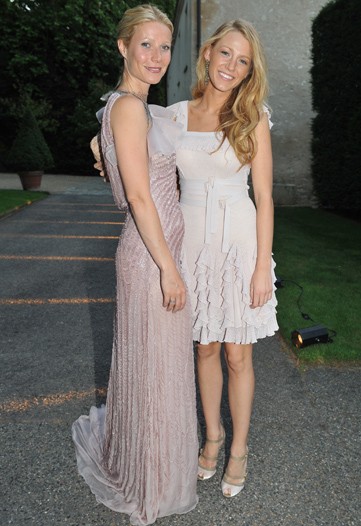 The party is the traditional conclusion for Paris couture week, and as one can see, the Château is an inspired location for the gathering.

Another G2 star, Leighton Meester, is seen at the party with designer Marc Jacobs. 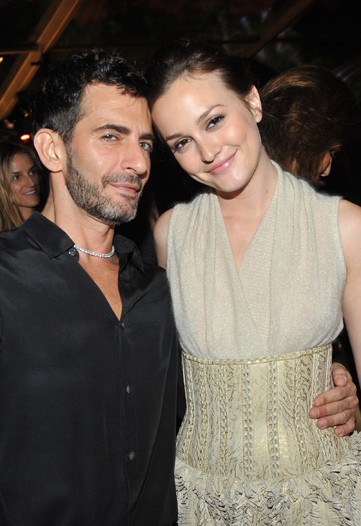 We love this image of Lee Radziwill on the left; on the right we see Jane Fonda with the host.

Definitely the place to be for the fashion crowd on Wednesday night.

One other Gossipy note, the show continues shooting in Paris for the new season, below we see both Ms. Lively and Ms. Meester on the set. 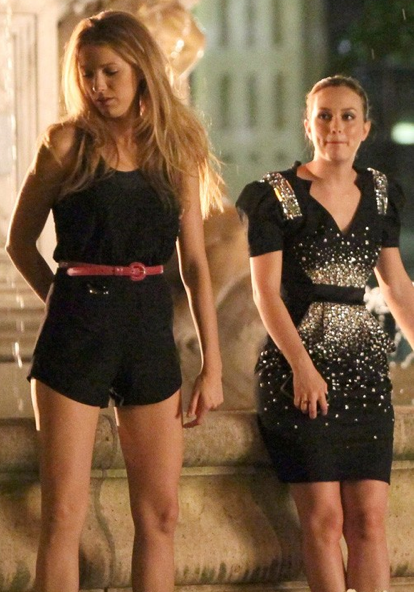 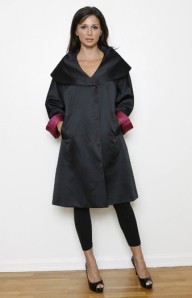 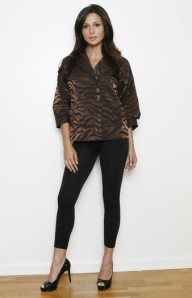 The line won’t be available until the end of September, but Women’s Wear Daily (subscription req’d.) had courtesy images of several styles, including the two above.  We like the coat on the left (and actually have a very similar vintage piece) but feel lukewarm on the other items.

Next, our first look at the Keds – Gap collaboration, below we see the Womens’ styles. 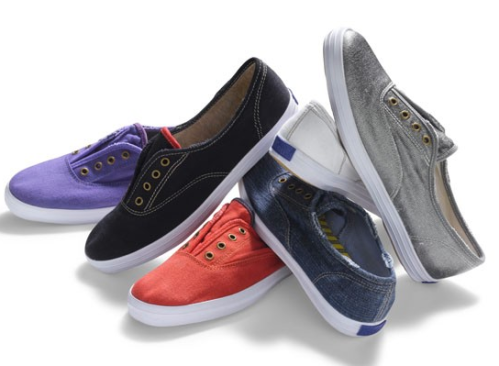 Vera Bradley fans will be happy to learn the company is now offering backgrounds for one’s phone, iPad or desktop.

We do have news of a new AntiPrep. Can you guess who or what or why? 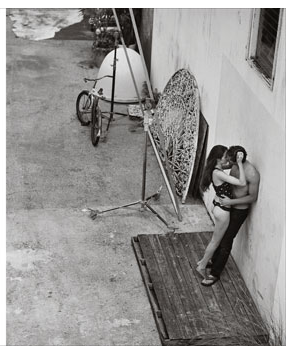 Bruce Weber for Abercrombie via Fashionista.com

Word that Abercrombie and Fitch is bringing back its catalog prompts the addition to the AntiPrep Wall of Shame.

The company announced last week that its racy catalog, gone for the last seven years, is returning this month. Fashionista has the story, and some photos: “Exclusive: Inside the New (and Very Naked) A&F Quarterly“. The picture shown above is about the only one safe enough for today’s post.

Other news about the retailer concerns bugs, more specifically bedbugs.  Last week an infestation of the creepy critters closed both a Hollister store and an Abercrombie in the city.

The witty minds at Racked came up with the image seen above, we couldn’t resist sharing it.  Both stores have since reopened, but NY magazine asks if the Hollister problem is really solved in this interview with an expert on the topic:

“We also just learned that Abercrombie on the Seaport has bedbugs, too. What does that say about the problem?
The worst-case scenario is one of their warehouses had it. And if that’s the case, that’s frightening, you know what I mean? Because you’re not just talking about a few stores anymore. But I think it’s actually really scary that it’s more than one location. They have so many employees at Hollister and we don’t know whether any of them have it at home or not.”

We leave you something a tad more upbeat.

That is a Timex Design Your Own watch created by yours truly for today’s Pretty In Pink; click on the link to go make your own. Our thanks to the folks at High Snobette for the tip!

With that we bid adieu until next week, may everyone enjoy a splendid summer weekend!

We are attempting to get things back to normal here at Princess InterGalactic HQ following yesterday’s little hiccup. That incident is going to require more time and attention (there are many items no longer as frozen as they once were), thus we shall be brief today.

How are we all feeling about a Don Draperish suit for the man of the house? It seems there will soon be an opportunity to acquire one: Brooks Brothers and Mad Men costume director Janie Bryant have collaborated on a men’s suit.  WWD describes the look as “…inspired by Draper and the other well-dressed cads at fictional ad firm Sterling Cooper”.  We don’t know about you, but ‘cad’ is one of our alltime favorite words.

The limited edition suit will be available online and at 10 Brooks Brothers stores beginning October 19 through the show’s final episode November 8, but one can’t speculate how long the inventory will last, as only 250 of the Brooks suits have been made. Fans may recall that Ms. Bryant is an Emmy winner for her direction of the show’s costumes, we really are quite intrigued, and eager to see this creation.

As we’re talking about the Drapers, how did everyone like Betty’s updo for her romantic dinner with Don during their “Roman Holiday”? 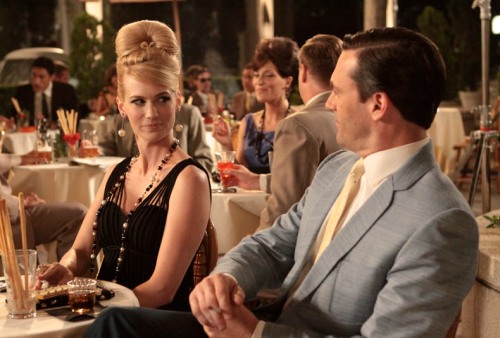 Our next tidbit is also related to a television show, but in this case the focus is on an actress from the show, Kelly Rutherford of Gossip Girl. Monday’s Droolicious post is titled “Kelly Rutherford and Hermes Go Preppy“:

“Well aren’t they a preppy site? Gossip Girl mom Kelly Rutherford was spotted in Manhattan strolling with her almost three year old son Hermes. With her tan Hermes handbag (the other Hermes), tweed coat and LL Bean boat bag, Kelly totally goes for that collegiate look. And for son Hermes? He pulls his own preppiness and rides in a plaid detailed Maclaren stroller.”

‘Pulls his own preppiness’ is a phrase we’ve not heard previously.

It’s time for a big thumbs-up to the young men at the helm of Smathers and Branson, Peter Smathers Carter and Austin Branson. The two made Inc. magazine’s “30 Under 30” list of young entrepreneurs.

It is likely their products are more recognizeable than their faces, with gems like the Pink & White Houndstooth Coin Purse, today’s Pretty in Pink.

Of course that is but one example of their fabulous needlepoint merchandise, many might find their traditional needlepoint belts to be more familiar.

We do adore their products.

With that we say g’bye until next time, may your afternoon and evening be calm and soothing.

The Good, the Bad, and The Preppy.

Happy Friday everyone, direct from Princess HQ in “the country’s frozen midsection.”  (Is it just us, or does this sound like an area of the body desperately in need of cosmetic surgery?)

Having ripped off completely borrowed liberally for the title of our post, let us do The Good first, shall we?

The Good would definitely cover the delightful person responsible for surprising us with this:

Now, there are some rules associated with this honor:

Here are ten more blogs that we just adore (not to mention Breaking News!) and read almost every day:

Down the Line Tennis

Imelda Matt (his logo is so fun) 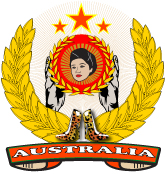 Misadventures of a Newlywed

Now we do the Five Addictions:

#2. Literature. Of any kind.PHOTO: Somos Images/Corbis

#3. The fabulosity that is Mad Men. 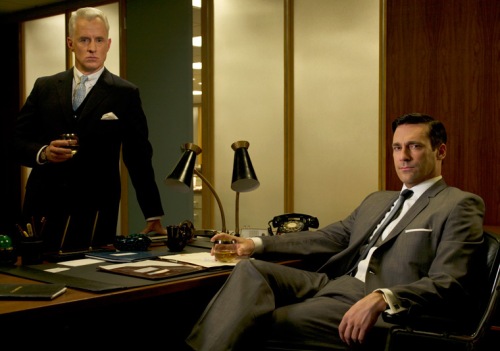 #4. At least we’re not alone with this next one: 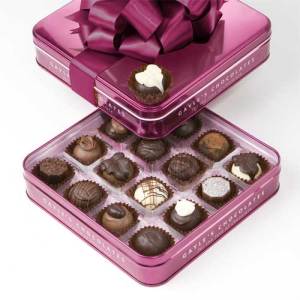 #5. Our issues with #4 require vigilance; one of these is clipped on as soon as we are dressed. 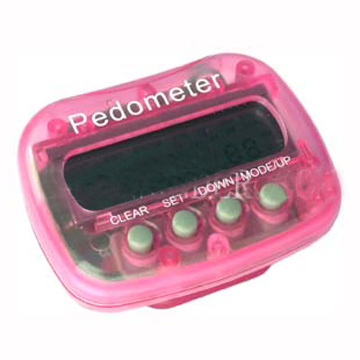 As far as The Bad is concerned, regular readers won’t be surprised to see news of 1,100 layoffs at our favorite retailer, that isn’t making us feel any better about the future at Saks.  As the Financial Times put it:

“Saks’ cost-cutting follows news on Wednesday from its rival Neiman Marcus that it was shedding 375 jobs, or about 3 per cent of its staff, after seeing December comparable sales fall by almost a third.

Tiffany, the jewellers, reported a 35 per cent fall in comparable sales at its US stores in November and December, and has said it is considering further cost-cutting measures, having already offered early retirement packages to some 800 employees.”

Or as the Jewelry Designer Extraordinaire Wendy Brandes put it:

“Saks is still having its crazy sale. If you buy something, they might also throw in some store fixtures and a few sales associates.”

And double-ouch for anyone employed at Circuit City, or holding a giftcard from the latest in the liquidation line.

Are we the last one on the planet to learn that The Preppy Potato closed?  Just above the “Spring Coming Soon” graphic on their home page is the following message:

“We have decided to close shop. Thank you for your years of business. We have enjoyed working closely with all of you.”

For those unfamiliar with the company, the Potato offered belts with classic icons; they could also be monogrammed.  (Two shown below.) 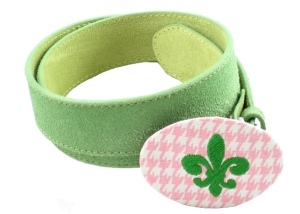 Frankly, we should have put that little item above in with The Bad. Oh well.  Thank you again Miss Breaking News, we are ever-so-grateful for your generosity!

With that we say “Adieu” until the next time. Do enjoy your weekend and stay warm!