A Gossip Girl in the Hamptons

We made a snap decision yesterday to play Blog Hooky, in part because it was the Consort’s Birthday.  Who can resist spending the day with someone whose Mad Men avatar is this cool?

We can hardly believe it is less than two weeks until the show returns! We are loving the crazy popularity the avatars are enjoying, they have definitely invaded Planet Twitter! (If you would like to make your own 60’s era look, just sashay on over to the Mad Men Yourself page and make some trouble!)

It was a busy weekend in Water Mill (the Hamptons) with the Annual Super Saturday Sale at Nova’s Ark Project – think giant designer rummage sale with a carnival and other activities and you kind of get the picture. The event is a fundraiser for the Ovarian Cancer Research Fund, this weekend marked the Sale’s 12th year. 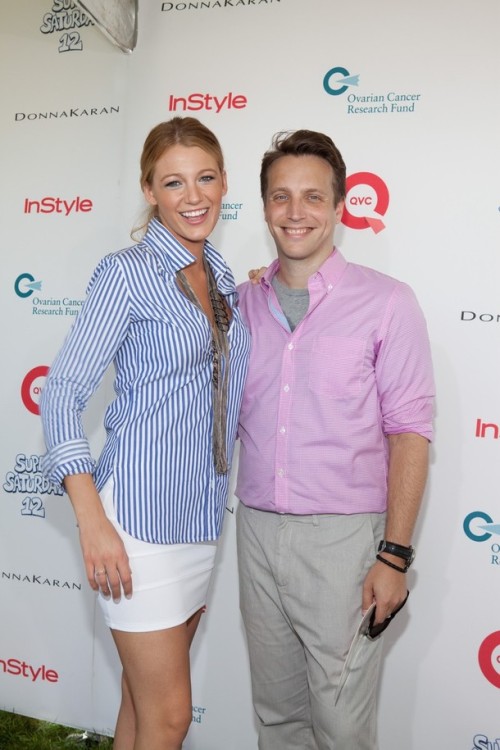 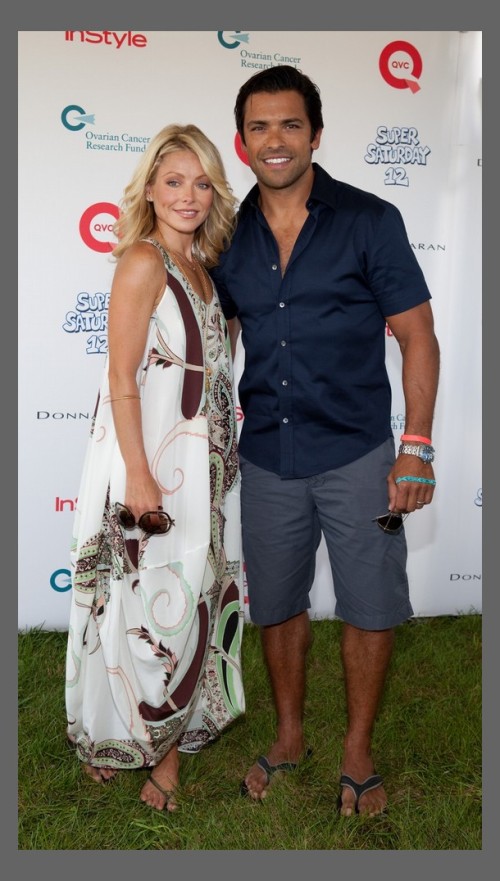 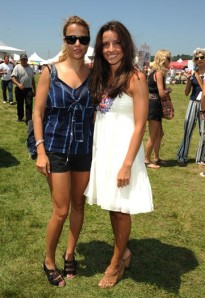 Below we see Ms. Lively with another Gossip Girl actress, Kelly Rutherford. 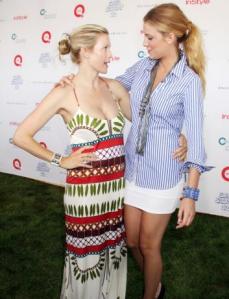 In other G2 news, there is word that Tyra Banks will appear in an upcoming episode; the host of America’s Next Top Model will play an actress.  And one last tidbit, another star from the show, Chace Crawford; he tells Glamour UK that he is already training for his big role in the remake of Footloose.

On a slightly related note, the Observer carried an interesting column: “Why Is No One Watching NYC Prep?”  Ratings are worse than we realized:

To compare to other prime-time shows that same night—Hawthorne, the new TNT show with Jada Pinkett Smith, had 3.2 million viewers… and the most watched show was The Deadliest Catch, a documentary series about fishing boats, which had 3.4 million viewers.

…Gossip Girl, perhaps the closest in the genre, had an average viewership of 2.59 million in its first season, which was considered low.”

We have many little retail tidbits to share, starting with the FLOTUS (First Lady of the United States) in another Talbots dress, this time on Saturday while in Norfolk. Mrs. Obama was there to speak to returning sailors aboard the USS Eisenhower, as well as the US Comfort battle group. 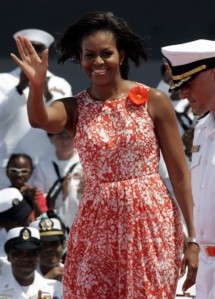 The First Lady wore Talbots’ Swirl Cotton Dress, available in the color seen above, as well as this: 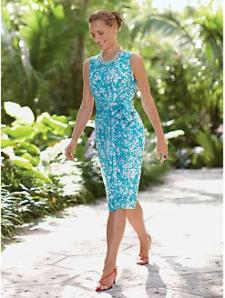 We simply must ask if anyone has yet confronted one of the hideous “Christmas in July displays or promotions?  We were reminded of the phenomenon by a story in the WSJ Friday, “Twas 147 Shopping Days Until Christmas”

“America’s retailers are responding to the recession with Christmas in July. A number of retailers and toy makers launched Christmas sales and promotions this month…”

The story talks about Sears, as well as one of its divisions, KMart:

“…two retailers have invited shoppers to take a stroll down “Christmas Lane,” anchored by a “Holiday Décor Shoppe” and “Gift Shoppe,” while snowflakes drift over the scene and holiday music plays in the background. Customers are awarded free shipping if they pile up a tab of at least $60 on items ranging from holiday decorations to snowblowers.”

What are your thoughts?

We are blasting out the door with The Consort for a day at the museum, an exhibit called Cars and Guitars. That’s all he wanted for the big birthday, this exhibit and homemade brownies, how easy is that? TP is the luckiest Princess on the Planet, to be sure. Sigh.

Mad Men Yourself, “Parodies of Preppiness”?

For those readers of a…umm…well, readers of a ‘certain age,’ we must share yesterday’s “Where did TP’s brain go?” episode: after launching into a silly flurry of activity to make it to our afternoon volunteer shift at the local Senior Center, what do we learn? We learn (again) that putting things *in* the calendar is really very effective at warding off those occasions when one shows up for a shift that is scheduled for the following week. It also helps prevent the special looks one receives from the other volunteers.

But since we are chatting calendars again, we must share the newest addition to our Preppy Calendars category at the Princess, our desktop In Good Company Calendar for next year. 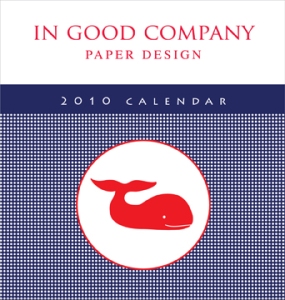 This is a desktop calendar, and the twelve oh-so-preptastic months fit right into the acrylic case that doubles as an easel. 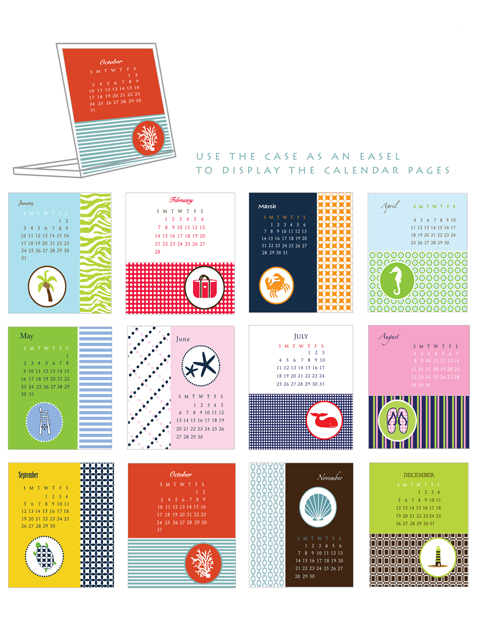 Upon learning we could offer this to Princess customers for only $14 we put it on the “must-have” list for our little store.

Next, we wanted to share a fascinating column from the Boston Herald, one we think readers will find more-than-intriguing. The piece is titled “Let Me School You About Preppies,” it is by writer Sam Allis.

It begins condemning a show we have blathered on about ad nauseam mention here occasionally, NYC Prep.

““NYC Prep,’’ the ludicrous reality show about spoiled rich kids, most of whom attend Upper East Side private schools.

Mr. Allis makes the point about the origins of the word “preppy” in prep schools, somethings Princess readers are well aware of, but he then raises a topic we once heard debated with a ferocity that seemed just inane:

“And prep schools are, in the cultural sense I’m talking about, boarding schools – not country day or Upper East Side privates.

It was on boarding school campuses that true preppies were spawned. The petri dish in which the culture was created and perpetuated was the prep school dormitory.”

We are in the camp that believes one is not required to be at boarding school to be immersed in what we would refer to as a basic preppy culture, one need only be attending certain schools. The entire topic reeks of a “I’m preppier than you are” sort of argument, a topic not even worthy of conversation IOHO.

Naturally the story contains the standard references about current definitions of ‘preppy style,’ appropriately referring to it as “classic, conservative men’s clothes.”  That breaks no new ground.

But then things take a bit of a negative turn when discussing specific retailers:

“The reigning king of preppy wistfulness remains Ralph Lauren, born Ralph Lifshitz in the Bronx, who has created the ultimate illusionary preppy world. His efforts are nothing if not about a yearning for a past he never knew.”

“His threads are beautiful, in contrast to parvenus like Vineyard Vines, an upstart that makes clothes for men and women that are parodies of preppiness. J.Crew still answers the bell because it sells smart preppy knockoffs.

We’ll share the following and then move on, encouraging readers to look at the actual column personally, that ensures a far better experience than our efforts at paraphrasing it.

“Every once in awhile, marketers will try to sell patch madras or seersucker again. What they’re selling is the past. No one drinks gin and bitters anymore, but who cares?”

We close with something we stumbled on to via Twitter yesterday that is likely to hold appeal for our fellow Mad Men fans. Remember the Elf Yourself fun every year around Christmas? (No, that isn’t TP, or even anyone we know.) 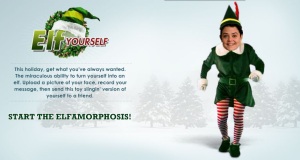 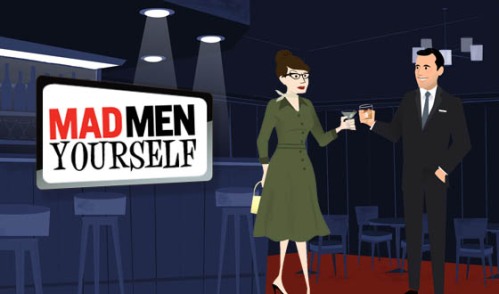 Oh, of course we made our very own:

We hope we can convince the Consort to make one for himself.