The fashion comet known as Thakoon (formally Thakoon Panichgul) continues to fly high with word he is launching a new line, “Thakoon Addition.”  As seen in the WWD story:

“… a new capsule collection… a supplementary line with May-June and November-December deliveries, which will be inspired by some of the designer’s most popular designs, and sit alongside the main collection. The suggested retail price points for the line will range from about $495 for a top to $825 for dresses.”

This is not connected with the Thakoon for Target Resort collection, now slated to hit stores December 28.  The previous release date was December 25, an absolutely absurd day to launch the line; the 28th is far more reasonable.  Below, one of the looks from that group.

The News-Observer (Raleigh-Durham) makes some intriguing observations on the upcoming Target collection:

“His look for Target is J. Crew meets Anthropologie, with a heavy-handed mix of stripes and florals — a look that’s expected to be big for spring. He was generous in using colors traditionally found at J. Crew — where he was once a merchandiser — including canary yellow, Kelly green and navy.”

The writer, Samantha Smith, is always a great read; she also does an excellent blog. It appears fashionistas will see the designer’s work at Target long before knowing if he is doing any Inaugural Day fashions for Michelle Obama, or even Sasha or Malia.

In our ‘Preppy on Sale’ update, Brooks Brothers has substantial inventory in their online Clearance section, including most Handbags and Shoes at 70% off.  They are also doing their Golden Fleece Foundation through tomorrow (Thursday, 12.12.08) night.

Shoppers using their Brooks Brothers Platinum MonsterCard MasterCard or  Brooks card will receive a 25% discount on their purchases; those using any other form of payment enjoy a %15 savings.  2% of net sales will be donated to Golden Fleece Foundation which supports charities like St. Jude Children’s Research Hospital.

Miss Nautical by Nature, we couldn’t help ourselves – the moment we spotted this we thought of you:

Although truth be known, we aren’t seeing this on you.  If anyone finds it appealing,  Brooks has the Nautical Scarf marked down 50%, now $114 from $228.

Banana Republic says they have added new items to their sale; we found the Striped Peacoat Sweater appealing, now $119 from $175.  It looks like it could have a very high snuggle factor.

LL Bean has added lots of new inventory to their sale and they are also discounting a number of outerwear styles.

Bergdorf’s is touting their sale, including three pages of Jay Strongwater markdowns.  The Tory Burch Channing Sporty Patent Flat is available in a number of sizes in both khaki and navy (left), and the Kate Spade Sassy Bow ballerina flat is also on sale. 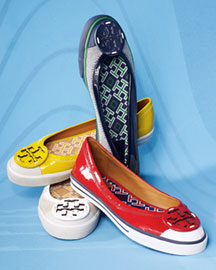 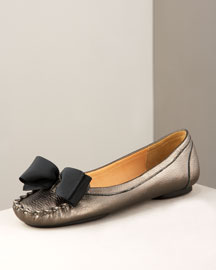 The Penelope clutch from Kooba in either pink or black is now offered at $207, from $295; the Florence Eiseman Pleated Ribbon Dress for 3-9 Months is selling at $82 from $136 (we love the Peter Pan collar and front bow!).

J. Crew continues with what is beginning to seem like the never-ending promotion; we are reluctant to use the word ‘sale,’ as that implies a discount on specific merchandise. This is Crew’s discount predicated upon how much one spends.  J. Crew is also offering free shipping for purchases totaling $100 andmoreonline. Use promo code HOHOHO at checkout. 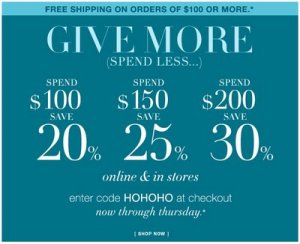 Hickey-Freeman continues their sale, also offer free shipping on internet orders of $100+, with the code GSHOL. The Boy’s Navy Pinstripe is $148.50 from $195, as is the Donegal tweed.  Both are the Madison model, and at these prices one can’t go wrong. 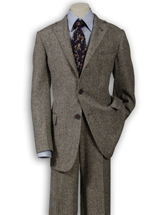 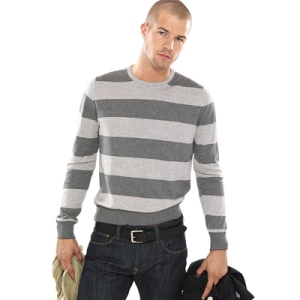 Hart Schafner Marx is in the midst of their Semi-Annual Sale; their cotton/silk sport shirts are $40.50 from $135, absolutely heavenly to the touch. 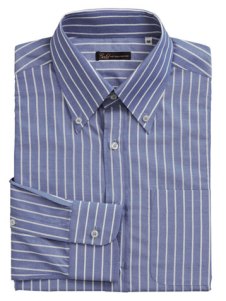 We are surprised to see they have removed the little promotional box about President-elect Obama from their home page. This is the brand doing the tuxedo for the Inaugural festivities, and they have also done several suits Mr. Obama wears frequently.

And the upscale Bobby Jones line has some very fiscally friendly bargains, items that whisper discreetly, “Take me to your closet!” Women’s Clubs are an additional 25% off, and the Argyle Cardigan in Navy is now $147, from the original selling price of $245.  Their $250 Urban Plaid Pleated Skort is now $75, available in a full range of sizes as of this writing.

Free ground shipping is also included here for orders totaling more than $100, use Promo code GSHOL for the shipping offer.

We close with an item dedicated to the always-wonderful Third Coast Preppy: the Times says lobster is at its lowest price in 25 years!

We thought everyone would appreciate that news, as well as the shopping and pricing rationale from the story’s author, Melissa A. Clark:

“I’M a sucker for a sale, the kind of shopper who tallies the amount “saved” rather than spent. My arithmetic goes like this: It makes more sense to buy the $125 cashmere sweater marked down to $95 than to pay full price for the $80 one.”

On that happy thought, until next time!