.
Hello and Happy Day to everyone…we hope it’s simply sublime wherever you are.
.
Speaking of sublime…how wonderful is this?

Looking for some property in Palm Beach? Perhaps you were hoping to buy the Breakers? (PB, not Myrtle Beach.) Well, your time has come. As we shared in previous posts, Hasbro has created a “Lilly-opoly” game in honor of the company’s 50th Anniversary.
.
Perfect for any Lilly Pulitzer fan, this makes an outstanding holiday gift.  Other properties players can purchase include “Via Mizner,” “Lilly’s Jungle,” and “The Vintage Vault.”  And instead of the standard pewter tokens, there are options like a palm tree, a monkey, and (this is our favorite) a shift.  The game runs $50 and is scheduled for release in November, but already seems to be available for $50 at places like Under the Palm Tree. 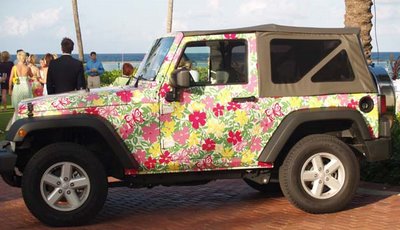 Also scheduled for release this month, that special Jeep Wrangler covered in pink and green and yellow Hibiscus, along with the Steinway anniversary piano in the same motif. Both are available by special order at any Lilly Via store and both are referred to as ‘limited editions.’

.
Disregarding all the anniversary hoopla, we come back to basics – the lush designs and whimsical touches that are Lilly. It is completely Prepalicious and fun, fun, fun.

A new column at the popular blog StyleList makes the statement as well: “The J.Crew Collection puts a high price on preppy.” Using merchandise like the $3500 Leopard Beaded dress shown above, yesterday’s column notes:

“We’ve always loved J.Crew for the fact that we can get quality, classic pieces at a decent price — a dress isn’t going to be cheap, but it won’t look or feel cheap, either. Still, the price tags were never enough to dissuade us from perusing the racks. At least, not until now.”

.
The Leopard Beaded Dress is described by J Crew as “An opulent creation completely covered with thousands of precisely hand-sewn beads—it took an experienced couture artisan a month to craft this exquisite dress.”  We would suggest the item begs the question: is this preppy?  Is it what you go to J. Crew for?
.
The column also shows the Printed calf-hair Astor jacket at $2200:

.
The caption for this photo in the story reads “Sure, it’s cute … but two grand?”  As the column continues writer Kristen Seymour says:

“Now, every prep’s favorite store is changing things up — they’ll still be offering the same kind of clothing they’ve always had, but they’re adding the J.Crew Collection, with price points that go higher. Much higher.”

What do you think? Is the J. Crew Collection concept a good idea? Bad idea? Doesn’t make any difference? TP is more than curious to hear your thoughts.
.
Grins and giggles.

Happy-Happy and Hubba-Hubba! Did everyone enjoy their weekend? We hope so. 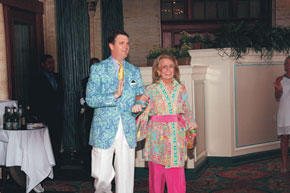 Of course, the happiest of all greetings go out to our Lilly Pulitzer, recently hospitalized for almost a week, but bound and determined she would be at The Breakers (Palm Beach) last Friday for the big bash honoring Lilly Pulitzer’s 50th Anniversary. And she made it, as seen in the photo above, looking just fabulous! (Pix compliments of the good folks at the Palm Beach Daily News.) Lilly is also seen in the photo just below, with company co-owner and President James Bradbeer.

There are big plans for the brand we all love, and while The Breakers party was used to thank the company’s bigger customers, it was also clearly the launch pad for some of the more exciting plans to recognize the ‘Jublilee Celebration.’ The evening was a vision in pink and green, truly it was. Just look at guests dancing the night away; you could spot those dresses anywhere!

As a rule, pianos are for playing music, or practicing scales, oui? However, at times they may be used to meet other needs, perhaps serving a more decorative purpose. In fact, The Princess has long thought a pink and green piano would be a marvelous addition to the Prepatorium, and now look…there is going to be just such an instrument! Steinway and Sons will be making the official Lilly Pulitzer 50th Steinway piano you are gazing at in the photos below. Isn’t it divine? 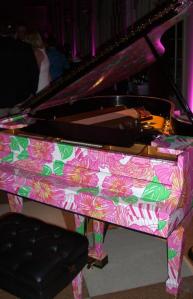 And how about a pink and green car or SUV? Isn’t this what Daddy really meant to give you as a graduation present instead of that dreary Honda? Of course it is. 70 of these limited-edition Lilly Pulitzer Jeep Wranglers have already been pre-ordered; at about $25,000 each they seem like a great deal to us! The vehicle (shown in the photo below) is hypothetically available through Lilly Signature store owners we believe, and available this Fall. 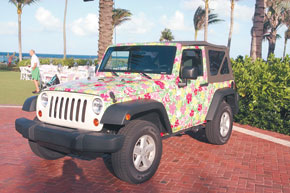 But here is the one that is TP’s favorite: a Lilly Monopoly game! How cool is that? The word is that Hasbro will introduce a Palm Beach version of its Monopoly game called “Lilly-opoly.” (Why do we see zillions of these wrapped and parked under a few Christmas trees this holiday season?)

There are loads more ways the company plans to celebrate (perhaps better spelled “sell-ebrate”) the anniversary, but we’re just out of time. We’ll get more of the information to you in the next few days.

Also in Lilly news…the new Madison Avenue store has opened! And only in New York at a party celebrating such an occasion would you have so many LBDs contrasting with the famous Lilly prints! Just below you’ll note the stunning new “Gillian” pink sheath worn by Gillian Miniter. The name is no accident – this new design from Lilly is actually named for Ms. Miniter, a philanthropist and socialite.

Now, rumor has it TP asked Mr. Princess to approach the man in the turquoise paisley jacket and attempt to purchase it on the spot so that she might wear it. Furthermore, it is said that if the response to that request was negative, she wanted Mr. P to then physically accost him and rip the jacket from his very body! (L to R: Rick Sabag, Steven Stolman, Frank Rico, and Victor Basile) Of course, The Princess denies *all* of this, calls it poppycock, and suggests people get in touch with her press person or publicist if they have any more questions. Honestly. (BTW, does anyone know the name of that particular print seen in the turquoise jacket?)