Hello-Hello, happy Thursday! There are all manner of tidbits to share this morning, we’re thinking it could be a major Bits and Bytes kind of day.

We’ll jump right in with more news of collaborative fashion lines, here is a look at some of the new Lacoste and Levi’s denim. 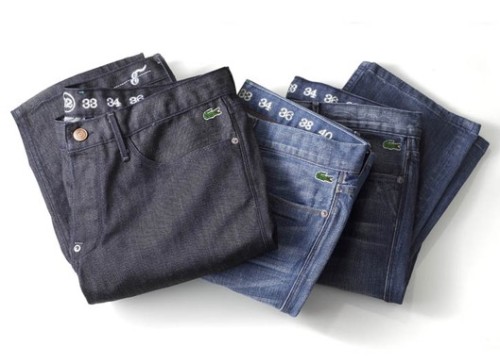 The new collection launches in March, it is part of Lacoste’s effort to grow its premium denim line. WWD reports the women’s styles will include three different fits, as well as shorts.  We have previously posted about the Levi’s partnership with Brooks Brothers, although that collection is only available in men’s sizes.

Sperry continues to collaborate as well, here are the Sperry/Band of Outsiders Fuzzy Boat Shoes. 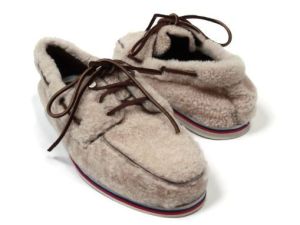 Now, our initial reaction was along the lines of “Heavens to Betsy, another Sperry-gone-wrong moment, how many can we take, the scars of the Sequin Sperrys are still fresh!”  But then we (took leave of our senses) paused for a nanosecond, and thought perhaps there was a certain snuggle factor inherent in the design that made these palatable. It was a fleeting thought.  Quote of the Day on these has to be The Consort’s, upon first seeing the photo he said, “That is just wrong. It looks like you have a dead puppy on your feet.”

It’s up to you dolls, as always, we post – you ponder. If you decide these are a must for your MOTH (Man of the House), they run $325, and are available in a number of fabrics. 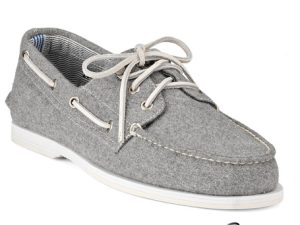 Our reaction to this next item from Sperry may have you concerned we’ve really stepped off the grid. 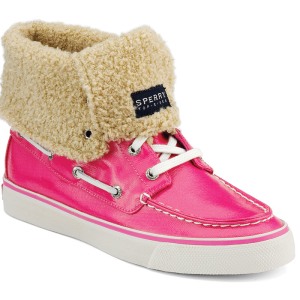 We don’t find it entirely abhorrent. One won’t see the Women’s Abacos on Planet Prep, nor are they a Pretty in Pink, but there seems to be some merit to the style. We think.

Speaking of Brooks Brothers, the company’s Fall 2010 line features a number of tunic-style pieces, something different for the retailer. Below left we show the Silk Charmeuse Printed Tunic, on the right, the Cotton Silk Mandarin Collar Tunic. 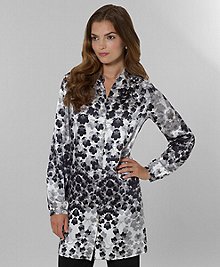 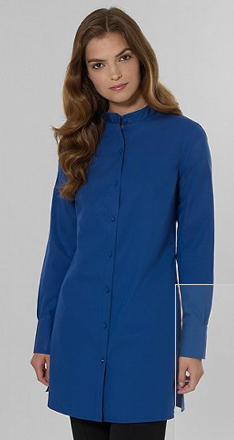 While grazing we found ourselves intrigued by the Merino Three Button Jacket, shown here in blue, also offered in grey and a rich maroon. On the right we show the Elongated Jacket. 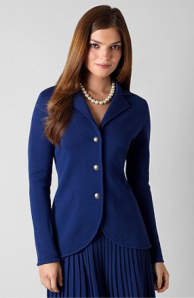 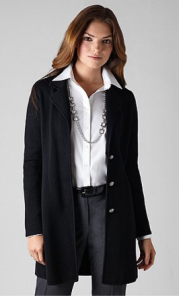 Per usual this time of year, Brooks has a number of delightful argyle pieces, including the Silk-Cashmere version shown below in two different colorways. 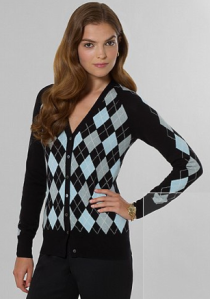 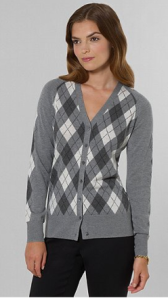 We mention this only because fashion writer Ralph DiGennaro has an interesting piece at Hamptons.com on the history of the argyle sweater.

BTW, it seems Brooks Brothers is expanding its social media presence, there are 263 responses to this inquiry on the company’s Facebook page:

“Without giving too much of the surprise away, we’d like your opinion. Choose one of the following names for a new online Brooks Brothers endeavor, our men’s blog: Of Rogues and Gentlemen or The Measured Man.”

It makes one curious about other retailers doing blogs, J. Crew has a FB presence, we have yet to see an official company blog.

Next, news about some fashion photos many Glee fans are finding distasteful. GQ’s cover story “Glee Gone Wild” features stars from the show in fairly racy poses and apparel, or lack thereof, we picked two of the least revealing pictures from the story. 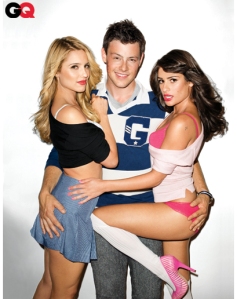 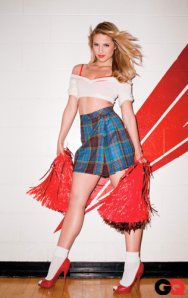 The photos of Michelle Lea, Dianna Agron and Cory Monteith are generating lots of buzz and probably boosting magazine sales. From this People story:

“The Parents Television Council slammed the photos, saying the spread “borders on pedophilia,” and Agron herself has apologized for them, saying the concept “wasn’t my favorite idea, but I did not walk away.”

Cory Monteith also appears in many of the photos, but is fully clothed.”

We do not watch the program, but from what little we have seen and heard, it seems the magazine photos are out of sync with the image created in the show. While it *is* an adult magazine, and Mr. Monteith is 28 and both young women are 24, general sentiment doesn’t seem to be favorable. Even the Fug Girls disapprove.

“Look, I get that GQ is kind of lad-mag adjacent and that the people on Glee are of age, but when you look at this cover and the shots inside and Dianna Agron looks like a nun simply because she’s wearing BOTTOMS, maybe we’ve crossed a PR-bridge too far.”

As proof of our airheadedness (as if any more was needed), we have to share the following image; this is something we actually saved for the sole purpose of concluding yesterday’s post! (A dreary little whineathon on the logofication of children’s apparel.) 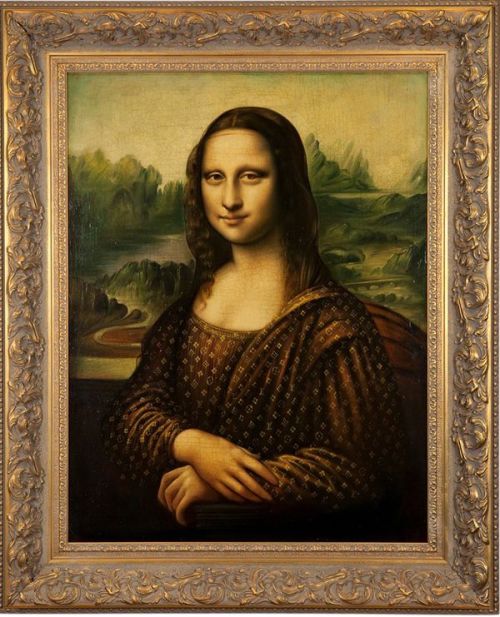 With that, we say ‘bye until next time.