Hello-Hello, welcome to a sparkling new week, albeit a shortened one for many.

We begin with an update to this summer’s post about the marriage of Lauren Bush to David Lauren, pictures of the exquisite wedding gown designed by her father-in-law, Ralph Lauren, are in this month’s issue of Vogue. 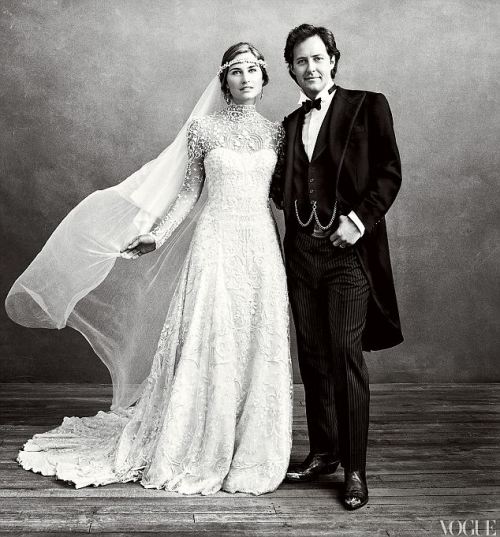 From the story accompanying the photos:

Lauren, 27, and David, 39, were married over the Labor Day weekend at his family’s 17,000-acre Double RL ranch in Ridgway, Colorado, before some 200 guests—intimate by fashion-industry social standards. 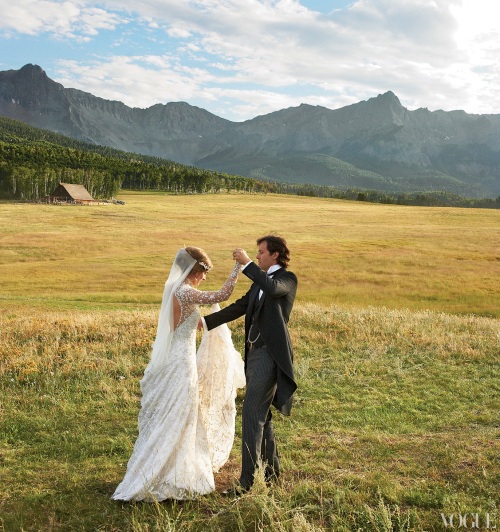 For anyone needing a refresher (it took yours truly a nano-second to recall the lineage), the bride is the daughter of Neil and Sharon Bush. Neither President George H.W. and Barbara Bush were able to attend because of the altitude (Mr. Lauren’s ranch is at 9000 feet) but the bride’s uncle and aunt, President George Bush and Laura Bush, were on hand.

More on how the gown was created from that Vogue story:

She and Ralph had a few casual conversations at family meals and holiday weekends about what sort of dress she’d like. In late June they met at the Ralph Lauren studio for their first official design meeting. “I walked in, and there were these beautiful illustrations of the looks we’d discussed with my face on them,” she recalls. “It was like a dream come true.”

The silhouette was an elegant blend of old and new, a Victorian influence is obvious when initially looking at the gown. Only when seen from another angle does the open back offer the very contemporary sense created by Mr. Lauren.  Ms. Lauren wore cowboy boots, her bridesmaids were in vintage prairie skirts and white linen shirts. 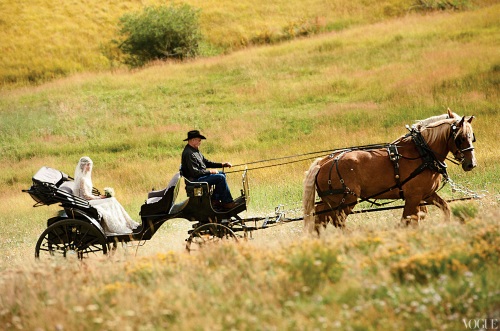 Also today, a brief glance at this weekend’s big do celebrating the 100th episode of Gossip Girl. 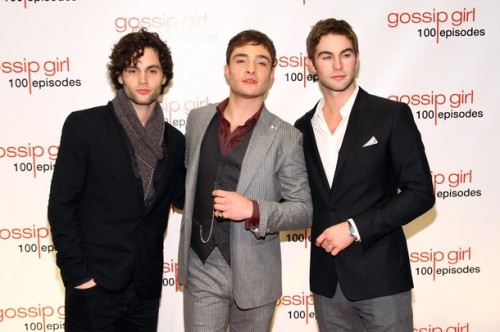 Above, some of those Gossip Guys, Penn Badgley, Ed Westwick and Chace Crawford. A point of curiosity: are there any photographs in existence taken when Mr. Westwick is not posing? Next, two of the show’s stars, Leighton Meester and Kelly Rutherford. 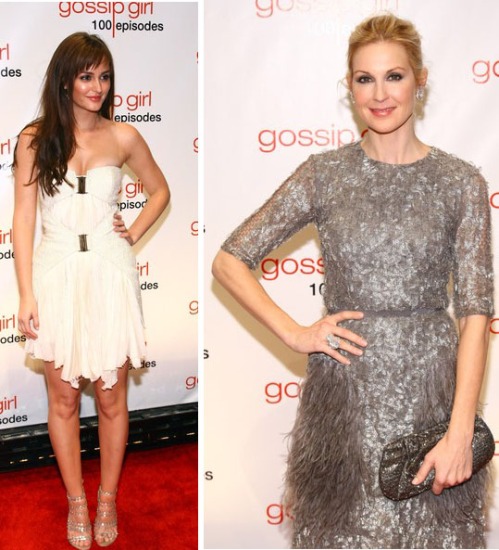 Below we see Matthew Settle (evidently a fan of Thom Browne’s shrunken styles) and actress JoAnna Garcia Swisher.  (No comment on the fit of Ms. Swisher’s….…dress.) 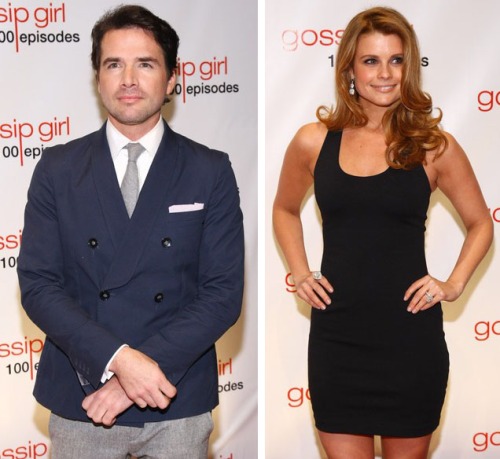 Many were eager to see what Blake Lively would wear to the party, she was in a Marchesa dress from the spring 2012 collection. 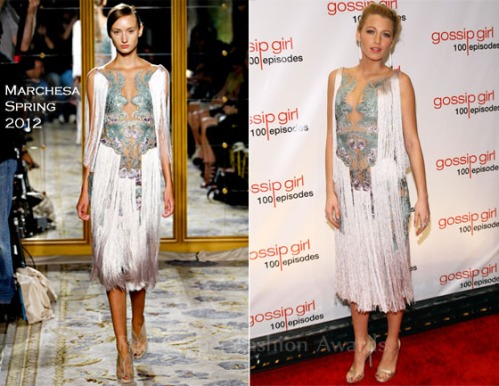 The best place for this embroidered fringed dress is the ice rink at the Winter Olympics or ‘Dancing with the Stars’.

This dress is doing nothing for her and I’m bewildered that she selected it.

I’ve looked at every single picture to find something positive to say about this look, but I have no words.

Ouch. (Not that we disagree, it is a rather ghastly frock.)

Finally, a delightful holiday collection from a brand we have  occasionally questioned, Tommy Hilfiger. 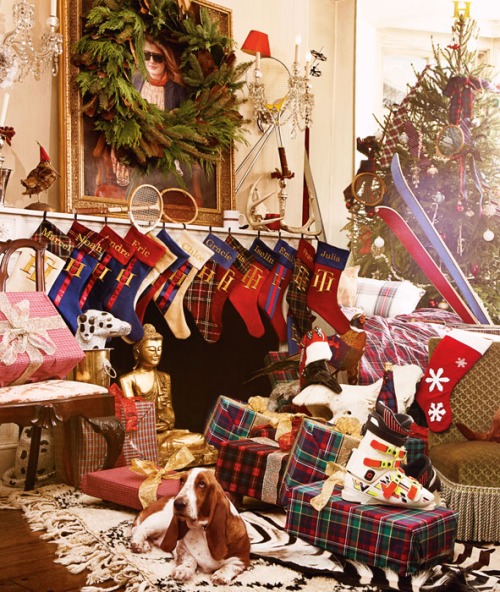 You may have already seen some of the ads from the print campaign, here are two pieces we liked. 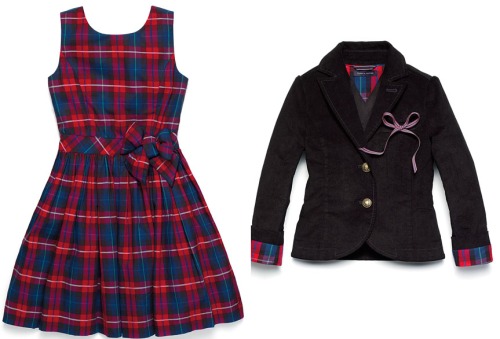 There are some darling accessory and gift items in the group. 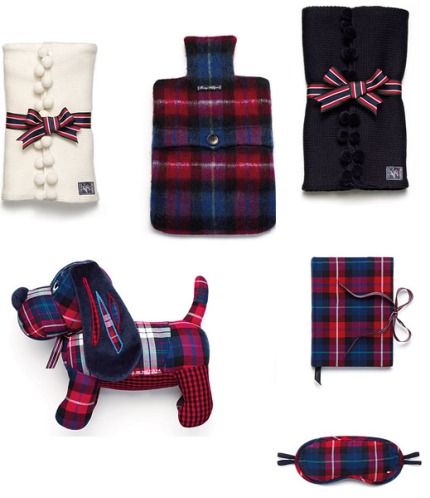 By the way, if shopping online today, everything is 30% off, use promo code THANKS30.

With that we say g’bye until next time.