Lilly Pulitzer, 1931-2013 “Anything is possible with sunshine and a little pink.”

The world is a little less bright today. Lilly Pulitzer died this morning at her home in Palm Beach.

Early this morning, Lilly Pulitzer Rousseau passed away peacefully in Palm Beach, surrounded by family and loved ones. Lilly has been a true inspiration to us and we will miss her.

In the days and weeks ahead we will celebrate all that Lilly meant to us. Lilly was a true original who has brought together generations through her bright and happy mark on the world. 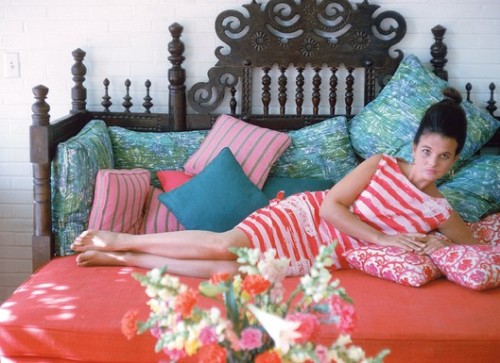 Most friends here know how Lilly became a fashion entrepreneur, but I always learn something new whenever looking back at the amazing tale of Lilly’s life. More from Women’s Wear Daily:

In search of a hobby after suffering a bout of depression in her late twenties, Pulitzer at first opened an orange juice stand in 1958 and then began developing brightly colored and boldly patterned shifts and blouses to help hide the stains created by her new enterprise.

From the NY Times:

Pulitzer’s dresses hung behind her juice stand and soon outsold her drinks. A boutique featuring the company’s dresses — developed with the help of partner Laura Robbins, a former fashion editor — soon replaced the juice stand.

Below we see Wendy Vanderbilt and a friend wearing their Lilly shift dresses in 1964. 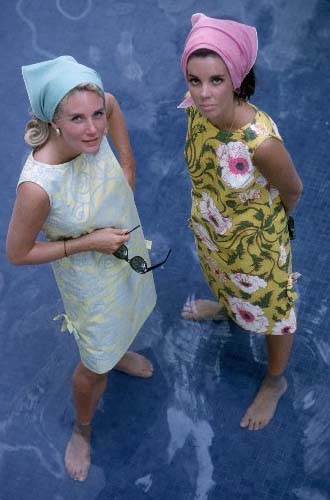 This offers a better view of a vintage Lilly dress. 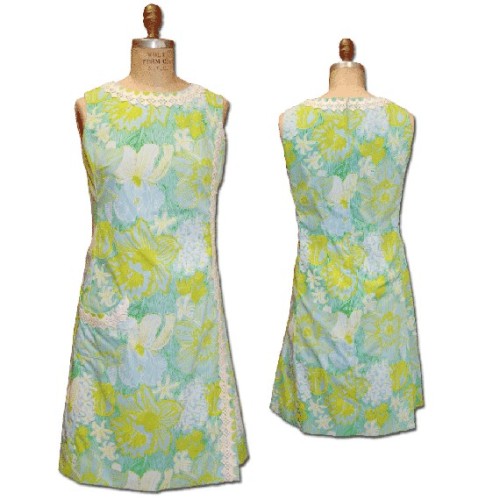 The dresses became a big hit in Florida and other resort communities.

….the accidental designer began selling the dresses for $22.50 apiece and couldn’t keep up with demand, aided by a designing couple at Key West Fabrics who helped conceive the lively colors, tropical print themes and other bits of whimsy that would become the brand’s signature.

The fabric was made in Florida at Key West Hand Print Fabrics, TQM was fortunate enough to visit and watch textiles actually being created. 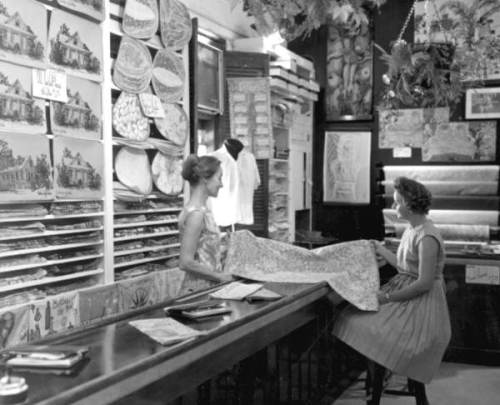 Below we see a 1962 photo of a woman in a bespoke Lilly silk dress, in the background, Lake Worth. 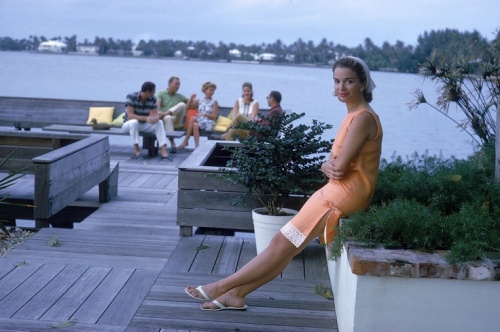 Lilly in a seashell dress. 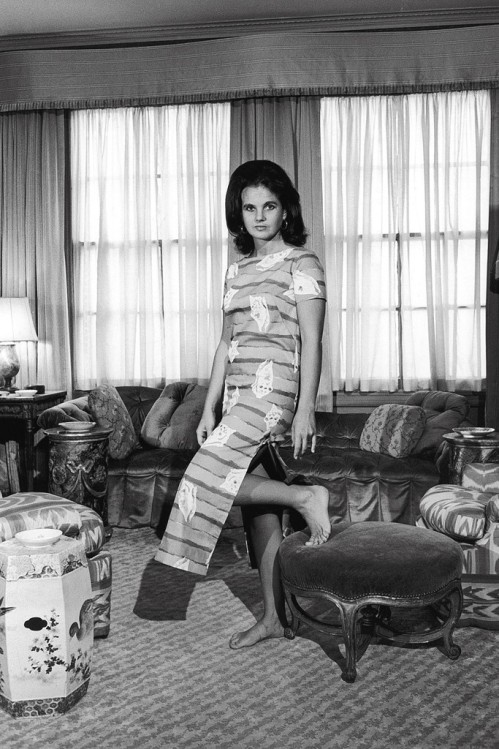 But the famous frocks weren’t really a national phenomenon until Jackie Kennedy was photographed wearing one on the Cape. 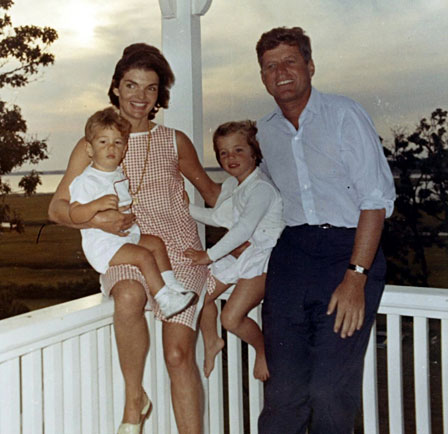 Back top the Times story:

Pulitzer’s tropical print dresses became a sensation in the 1960s when then-first lady Jacqueline Kennedy, who attended boarding school with Pulitzer, wore one of the sleeveless shifts in a Life magazine photo spread.

And things really took off. Below, some early ads shared by on the Lilly Pulitzer Pinterest page. At the bottom of the photo lower left you might just be able to see that fabric was available for $5 a yard.

Many early pieces were embellished with lace. 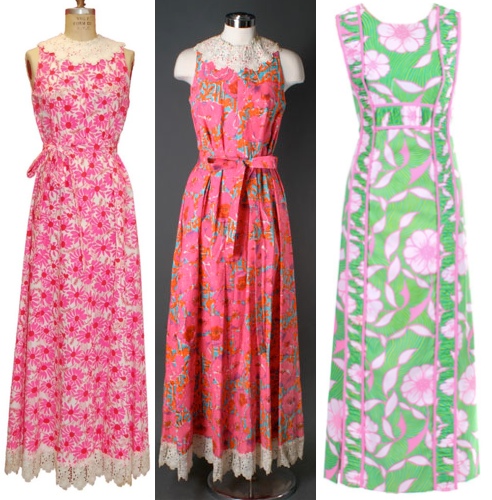 This offers a more detailed view. 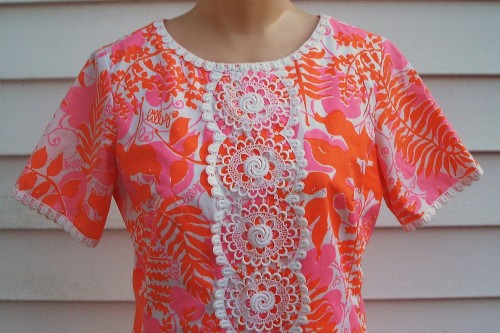 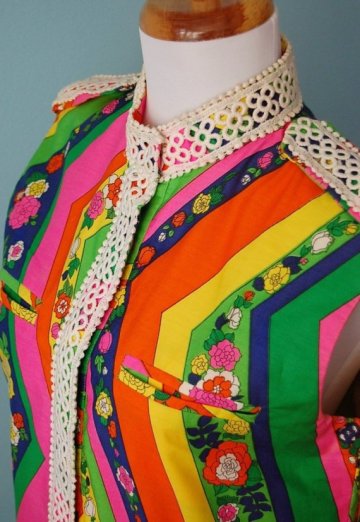 I like this part of a 2008 W Magazine story describing how Lilly stuck to her guns:

Though Rousseau credits a confluence of timing and luck for her success—with the Kennedy clan vacationing in Palm Beach those days, “the light was shining in this spot”—an unflinching stubbornness clearly served her label well. Told by one retailer that she had to start making fall clothes, Rousseau replied, “Oh, but you don’t understand, it’s always summer somewhere.”

Thus she introduced what just may have been one of the first resort collections, a year-round summery lineup that grew to include men’s, children’s and swimwear… 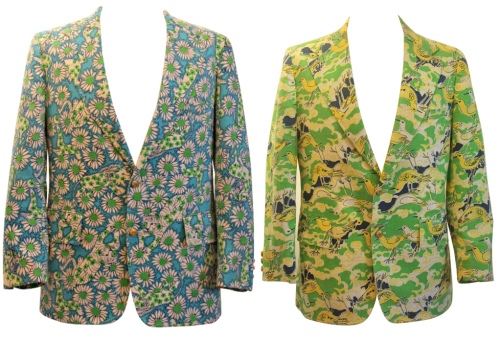 A 1968 ad for the men’s line of clothing via Lilly Pulitzer’s Pinterest. 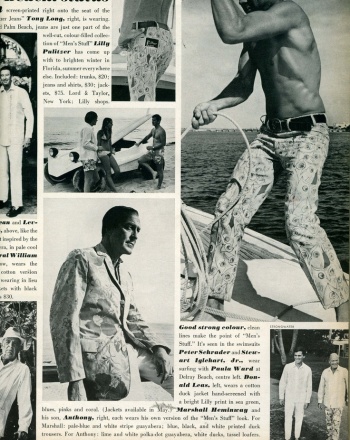 The Lilly Pulitzer product grew like a family. A Lillyputian version of the shift called “the Minnie,” named for Lilly’s elder daughter, was made for little girls—a great marketing move. Clothes for men took off, too: pants, swim trunks, ties, and a line of batiste nightshirts….”

And what men liked their Lilly? People magazine’s story has an answer.

Vintage Lilly menswear continues to be popular even now, this is a March post by the Necessary & Proper blog. 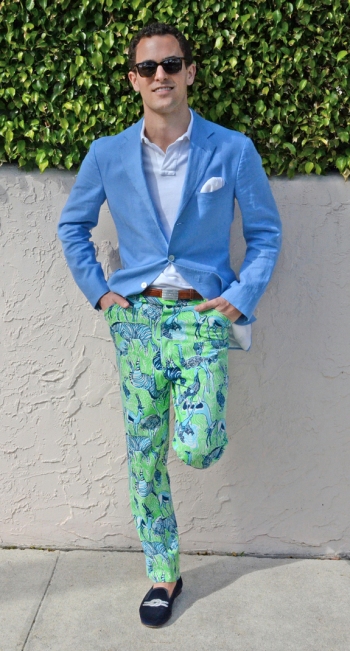 But it was the womenswear that fueled the company, this is from a 1977 catalog.

That remained true for womenswear, be it bell bottoms or a mini-dress.

Despite Lilly’s relatively high profile she preferred life out of the spotlight. From Vanity Fair:

Lilly is private. Even her closest friends complain of how tucked away she keeps her feelings—“a sphinx,” one calls her. “Scorpio” is what she calls herself. “They do everything in excess,” Lilly explains, “but keep things very close to the chest. I’m not into horoscopes and all that, but it is telling. Scorpios hold everything in.” Just like the Lilly. When that whimsical shift is on, you can’t tell what’s happening underneath.

The Pink Pelican has a wonderful Vintage Lilly Pinterest board. 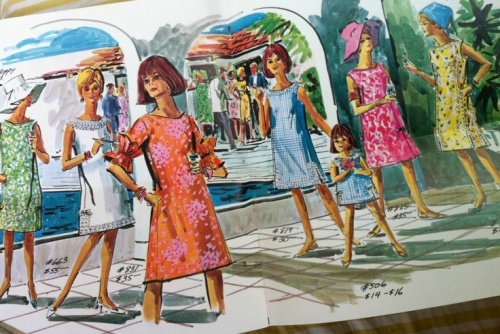 The business grew for many years but then things started to slow down, we return to W Magazine’s story:

By the early Eighties, however, the working-girl wardrobe and a neutral palette had taken over fashion; sales were flagging, and Rousseau shut the whole thing down in 1984.

And then in 1993, the year her husband died, Rousseau was visited by Philadelphia businessmen James “Brad” Bradbeer Jr. and Scott Beaumont. There had been a generational shift, says Bradbeer, and the daughters and granddaughters of Lilly lovers were eager for those snappy prints and flatter-every-shape frocks.

The love of Lilly did pass from one generation to the next. This photo from a 2009 Vanity Fair story shows Kathleen Kennedy and Rose Kennedy (L) in their Lilly, on the right we see Robert F. Kennedy Jr.’s daughters Kick and Kyra Kennedy in Lilly’s “Not So Crabby” print. 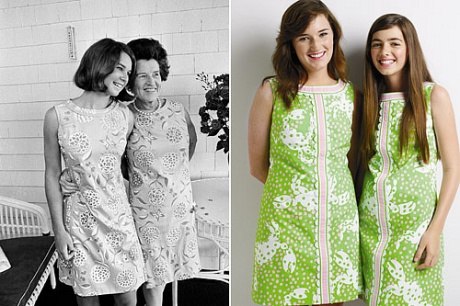 Lilly remained an active part of the re-launched brand, providing consulting services to the rejuvenated label.

Lilly’s design ethos speaks to her approach to life. Back to the Times story:

“I designed collections around whatever struck my fancy … fruits, vegetables, politics, or peacocks! I entered in with no business sense. It was a total change of life for me, but it made people happy,”

“Style isn’t just about what you wear, it’s about how you live,” Pulitzer said in 2004.

Lilly loved spending time with family and friends. Below, we see the entrepreneur in 2004 with her granddaughters, (l to r) Lilly Leas, Charlotte Pulitzer, and Emma Pulitzer, after presenting the brand’s 2005 spring runway show. 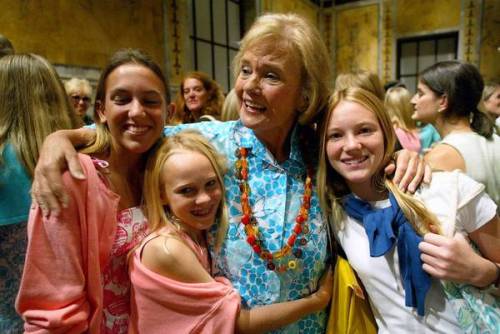 Today the colors remain rich and spirited as seen in a group of Lilly Murfee scarves.

“Today we celebrate all that Lilly meant to us and come together as Lilly lovers to honor a true original who has brought together generations through her bright and happy mark on the world,” James B. Bradbeer Jr. and Scott A. Beaumont, who bought the Lilly Pulitzer brand in 1992, said in a statement.

James Bradbeer Jr., president of Lilly Pulitzer, noted, “Lilly would always say, ‘It’s all about happy.’ There aren’t many places in our industry where happy is at the core. That has transcended time and generations, and it tells you a lot about the kind of special person that Lilly was.”

I like Kathie Orrico’s description of this one of a kind treasure:

“She sprinkled fun and pixie dust everywhere she went and was joyful right until the end,” said Kathie Orrico, a partner at C. Orrico, the specialty retailer that operates three Lilly Pulitzer stores and carries the line in its other four stores as well. “I saw her just last week and, just like always, she had cute phrases and words that inspired us to be bright and happy.