Happy Thursday, ’tis The Princess back again from visiting the Queen and still in a dither about the Princess Consort’s revelations yesterday. Really. I thought we had agreed some things just didn’t need to be made public, lest people think less of The Princess. And then he just goes and tells everyone about his fear of swimming in the ocean, and the time he “…hired a man to swim in the ocean for me”. How embarrassing for everyone to know he hires people to do his swimming for him!

On a side note, all Wall Street reporting aside, one would not know from the number of cars in the Nordstrom parking lot they hadn’t been enjoying a completely stellar year; they were quite busy yesterday. But then again, their sale section seemed really very large, especially when one considers this was not their Anniversary Sale section, but a “regular sale area,” an oxymoron at Nordstrom, for until recently (this year we believe) the only sales were the Anniversary Sale and the Shoe Sale. 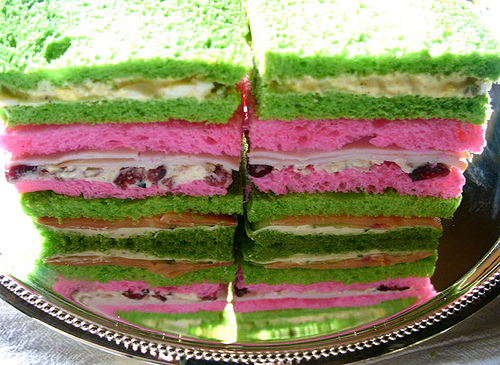 We couldn’t resist putting up this image of pink and green sandwiches, the shot was simply too good not to post! It is from flickr, posted almost three years ago. The description follows:

The fillings sound yummy although TP isn’t sure how she would do with the bright and vibrantly-hued bread! Now the next item on our hit parade, 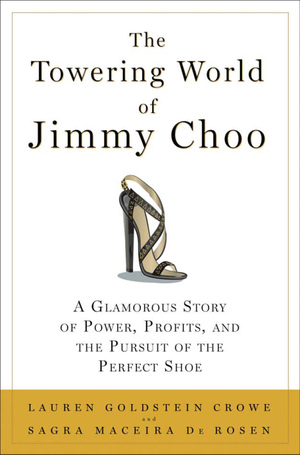 isn’t available until March of next year, but we couldn’t resist at least alerting you to its impending arrival. The Towering World of Jimmy Choo: A Glamorous Story of Power, Profits and Pursuit of the Perfect Shoe comes to us via Bloomsbury Publishing, and is written by Laura Goldstein Crowe, the former (and fab) Fashion Inc. blogger at Conde Nast’s Portfolio magazine, and Sagra Maceira de Rosen, an executive specializing in Luxury and Retail investments for Reig Capital.

One of our favorite websites, the Business of Fashion, managed to get an early and exclusive look at the book. As they put it, “The book is sure to cause a frenzy when published…” and we couldn’t agree more. This one sounds like it has all the makings of an outstanding non-fiction book so filled with inside stories it’s better than many a fiction book. Or, as you frequently hear from TP: “…I couldn’t make this stuff up…” on some of the more unbelievable posts.

Continuing with the Jimmy Choo track, Saks has several pair on sale at markdowns that are significant if these are your style. The Elm Water Snake Sandals start us off, with what TP is tempted to describe as “only a 4.5″ heel,” the way things are shaping up. (And up…and up!) These have “…Glamorous water snake metallic wraps at the cut-out ankle.” Indeed. Originally $920, these are now just $367.90. 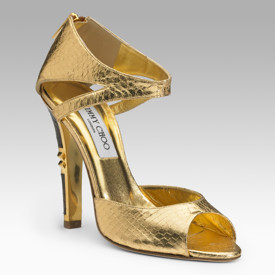 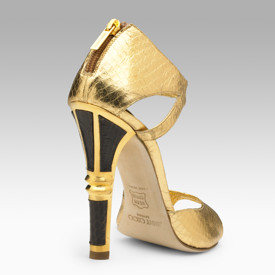 A few more sale samplings at Saks, including the Burberry Infant’s Stripe Skirted Onesie at $62.90 from $95; it has snaps at the shoulders, tough to see in the photos, we know. 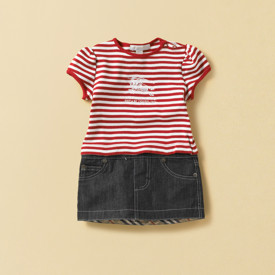 Also available if you’re looking for something a bit subdued for yourself, the Carmen Marc Valvo Polka Dot Dress is light and foofy, originally $330 and now $197.90.

Because we don’t want to show specific items that have limited quantities, here are just a few overview page links to designers at Saks we know you love, so you can just scan all of their sale items rather than seeing one specific item here that has long since sold out.

Their was a fair amount of Lilly Pulitzer left, some Shoshanna bathing suits and cover-ups, a smattering of Tory Burch goodies definitely worth looking at, a good amount of Hugo Boss for him, and a substantial amount of Juicy Couture. There is simply oddles more, this is just after The Princess did a quick graze to satisfy her concerns that these merit your time and attention.

We close with a few image of the plans for what is expected to be the ‘world’s largest fountain,” set to be built in Dubai. Situated next to the Burj Dubai, the world’s tallest structure as of July 4th, with an observation deck slated for the 124th Floor when the building is completed sometime in 2009. 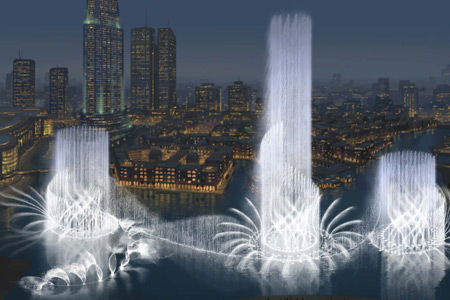 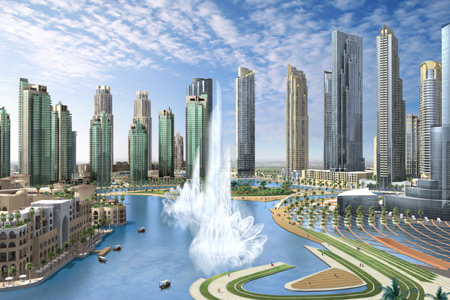 As the company’s news release explains:

The fountain on Burj Dubai Lake is more than a visual spectacle that adds to the aesthetics of Downtown Burj Dubai. It is an engineering marvel and will further contribute to Dubai’s rich array of tourist attractions.

The Tower will have one of the first Giorgio Armani hotels in the world, the “Dubai Armani Hotel.” A visit to the Burj Dubai website is an eyeopener; you can also enter a contest to actually name the enormous fountains.

As TP is truly something of a geek inside, she can’t resist sharing this image of “3 Upcoming Architectural Wonders in the UAE,” courtesy of the Hotel Club Travel Blog.