We didn’t get to post pix from all of last week’s shows at Fashion Week (the New York version) and we’re already well into London Fashion Week as we speak…yikes!

So it is time to play catch-up, recognizing many readers may have already seen some (if not all) of these styles. We begin with a brand that we always approach with trepidation; Tommy Hilfiger. (We fear one day we shall be attacked by a giant “TH” logo.) Below, the first two looks down the runway.

Mr. Hilfiger is celebrating a notable anniversary, the company he founded is now 25 years old.

Many of the styles were surprisingly attractive, certain to be stunning on those in the twenty-something age range. As noted by WWD (Women’s Wear Daily, subscription req’d.) in its review:

“…his spring collection was a shiny, happy ode to the genre that made him famous: preppy.”

In his review, Eric Wilson at the Times wrote:

“This was a collection full of Nantucket red chinos and trench coats, ruffle dresses made of grosgrain ribbon and seersucker blazers. Very country club, yes, but it was awfully difficult to put your finger on what the twist was.”

A closer look at some of the accessories. 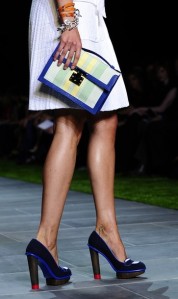 One columnist made note of the shoes, predicting the most sought-after next spring will be something akin to a “Sperry Top-Sider” on a platform.  (Ahem.) 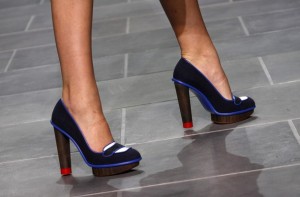 Other celebrities on hand for the show and/or the party following it, Mad Men’s Christina Hendricks and Jessica Szohr of Gossip Girl.

As mentioned in our post on the Ralph Lauren Spring 2011 collection, it is an unusual Fashion Week indeed when we find ourselves more favorably impressed by Mr. Hilfiger’s work, and underwhelmed by Mr. Lauren’s creations.

Another line we were unable to get to until now, Milly by Michelle Smith.

Frequent readers know we are fond of this brand, but the dresses above aren’t up to Ms. Smith’s usual deft touch; the placement of the abstract shapes is unlikely to flattering any size or shape.  Below, from opposite ends of the fashion spectrum, two of our favorite looks.

Chic, elegant and easy on the eyes.  In her story on the collection, Elizabeth Holmes from The Journal writes:

“If the name Michelle Smith isn’t synonymous with Blair Waldorf, it should be. The designer behind Milly knows the young uptown girl’s style from her headband to her heel, and showed that again with her latest collection, which must be bound for the “Gossip Girl” wardrobe department.”

A closer look at some of the accessories for next spring, oversized handbags and chunky jewelry.

Some of the celebrities spotted at the Milly show included Tinsley Mortimer, as well as newscaster Natalie Morales, seen on the right with Michelle Smith, the designer.

Some may recall our recent post on the new womenswear collection by Michael Bastian for prep classic Gant.  We shared some styles in that post, but thought we would post a few more, these from the line’s formal Fashion Week presentation. 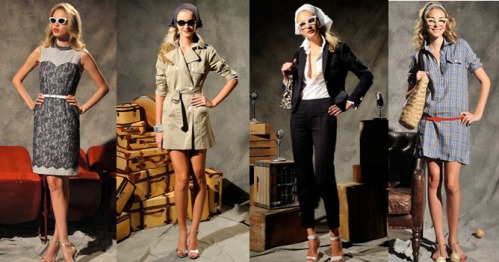 Most looks seem appealing, particularly for the younger set.

This shot includes some of the mens’ styles, we particularly like the novelty oxford on the far right. 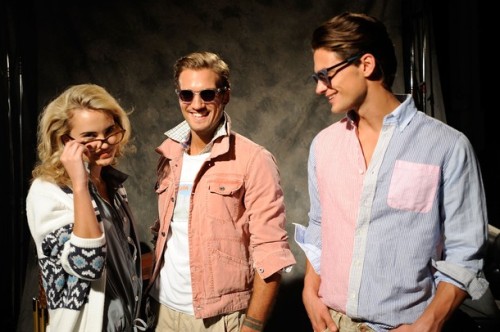 We close with something out of the ordinary, but something we think might put a smile on your face. 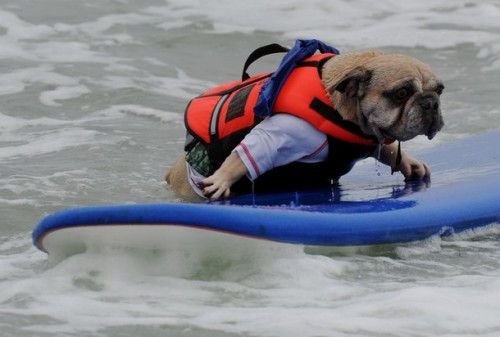 This weekend the dogs were in the drink as part of the annual Surf Dog competition.

Tilly says her eyes might bug out too if she were on a surfboard.

And then there is always the problem with wave poaching.

It helps to have friends on board. 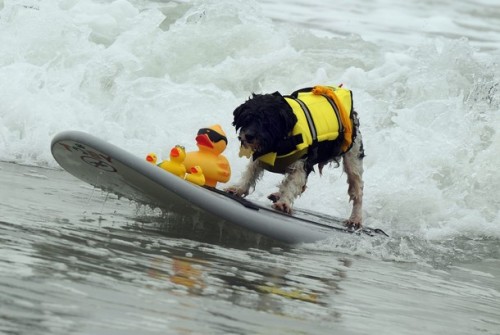 The event isn’t just fun, it is also a fundraiser for several organizations helping dogs in need; the event page has more. Back to the waves, fierce determination seemed to be the order of the day.

Barry Bland via The Sun

For others, quiet dignity ruled. 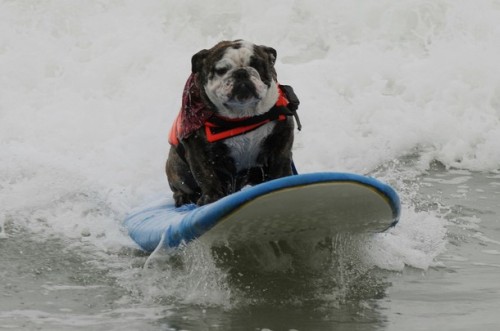 And sometimes you just need to know when to get out of the water.

To see a slew of photos from the big do, click here.  How does this relate to anything preppy? It doesn’t. But sometimes smiles are more important than labels and today is one of those days here at the Prepatorium.

Until next time, we hope your Monday is sunny and bright!

Before we do all the dreary-dreary, let’s start with some fun news, like Tory Burch opening her Palm Beach store today!

Conveniently located right on Worth Avenue, this is the designer’s 16th store; next month her 17th opens in New York’s meatpacking district.  This reminds us, has everyone seen the new Reva in suede?

Another designer landing nearby on Worth? Michael Kors, with a new boutique he has planned for a long time, according to a story in the Palm Beach Daily News:

“In America, the warm-weather place to be is Palm Beach,” he said. “Palm Beach has always been on my radar.” 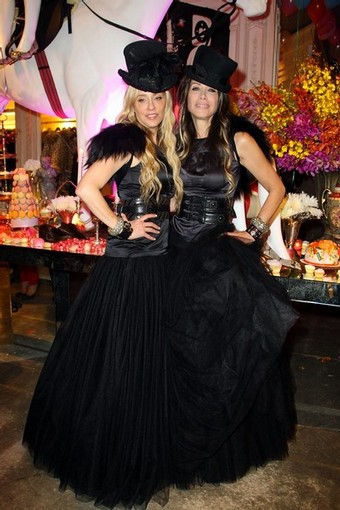 From the halls of popular prep school drama Gossip Girl star Blake Lively was on hand for the Juicy festivities.

Co-star and real life significant other(?) Penn Badgley was on hand along with Jessica Szohr…

Many readers are probably familiar with most of these dreary headlines, but just in case anyone missed them along the way…we start with Saks announcing last week that it is closing the Club Libby Lu stores; that is almost 100 shops in total.

The company expects to have all closed by the end of their first-quarter in 2009.

Then we had surprising news today about perennial Wall Street favorite J. Crew, according to an AP story via CNBC:

“Shares of J. Crew Group Inc. fell to an all-time low Monday after an analyst said she expects weaker results from the apparel and accessories retailer…” 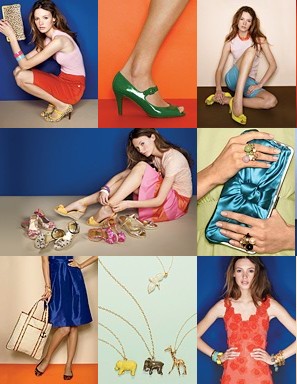 And now we are ever-so-glad the Queen Mother wasn’t planning to purchase the new flat-screen at Circuit City, with their bankruptcy announcement today.

But here is the loss that really hurts, hitting too close to home for our sensitivities. Harold’s.

During our years doing tv in Oklahoma City we frequently found ourselves at the Harold’s at Penn Place if shopping in town. Our favorite out-of-town Harold’s haunts were at River Oaks, The Galleria in Dallas and on Lover’s Lane; we would also pop into the store at Tyson’s when visiting that part of the galaxy.  Even TSU (The Spousal Unit) went nuclear upon hearing the news.

The word came last week that “O at Home,” the quarterly spun off from “O: The Oprah Magazine,‘ will cease publishing with the Winter issue.  Any future issues will be part of O.

The Princess Consort was concerned when he learned that Men’s Vogue will essentially cease publishing, although technically it is being ‘absorbed’ by Vogue, and hopes to publish twice a year.  (Okay… truth be told, the Consort won’t miss this one iota, it is I who enjoyed flipping through the pages.) 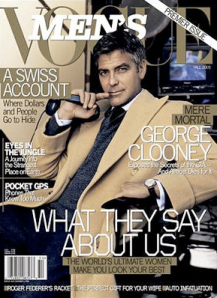 And here is one that rapidly became one of our more enjoyable business reads, Conde Nast’s Portfolio. It is dropping from twelve to ten issues a year.

We are in peril of becoming completely distraught, so rather than going off the deep end we shall mention the Great Preppy Giveaway here at  Preppy Princess Intergalactic Headquarters, where it is *always* pink and green.

You can win an outstanding Bungalow Scout Tote, simply by leaving a comment mentioning something about America you are thankful for… that’s it!  Just fill in the blank: “I am thankful __________” and leave a comment and you are entered!  Plus, if you mention the Giveaway on your blog and you win, you receive a fabulous set of oh-so-preppy Madras Photocards as a second gift that we’ll send to anyone of your choosing! And we pay the postage on all of this!

It is our way of saying ‘Thank You’ to all of our faithful customers and blogging friends! This contest closes at midnight Wednesday night, and the next one begins early Thursday, so have some fun…you just might be the lucky winner! For more information, click here to read detailed specifics and background!

For today’s Pretty in Pink item we honor Club Libby Lu (not that TP has ever set foot in one, but we have heard about them…does that almost count?!) with the Pop Sugar Polka Dot Cupcake PJ Set in pink.

Until later… grins and giggles.