“Are You a Jackie or a Marilyn?” & Bestselling Author Pamela Keogh

Hello-Hello, and Happy Friday. This seemed like a long week, was it that way for anyone else?

We have a special treat today, a visit with bestselling author Pamela Keogh, most recently noted for writing this outstanding book.

Are You A Jackie or A Marilyn? Timeless Lessons On Love, Power and Style is simply wonderful, far deeper than one may initially think.  Some Princess readers are already familiar with Ms. Keogh for many of her previous works, including Audrey Style and Jackie Style.

The author was kind enough to fit us into her busy schedule for an interview, so we move back to her latest work with a snippet from the publisher’s description of the new book:

“Any woman who has aspired to Marilyn’s sultry allure or Jackie’s unstoppable elegance (or who wants to balance sexy and serious) will love these entertaining lessons on channeling your inner Jackie or Marilyn in any situation, from throwing a dinner party to penning a love note.”

The volume begins with a quiz (more on this shortly) and then moves into more detailed looks at everything from how the two cultural icons approached fashion and personal style, to interpersonal relationships.  The book isn’t limited to comparing and contrasting the two women, there are also surprising tidbits, e.g., we had nary a clue that Jackie Kennedy Onassis donated money to help fund the Ms. magazine launch in the early 1970s, or that Marilyn Monroe was a big fan of the hand-written note.

Ms. Keogh is more than well-suited for the task, as she is herself attended Vassar like the former First Lady.  In addition to chatting about the book, we asked the author how she felt the two women would handle today’s electronic and technological intrusions into every facet of one’s life.

“They both had somewhat addictive personalities, Marilyn would lose a lot of stuff, probably leave her phone in the back of a cab. She would use Facebook to stay in touch with her fans, she had an obsessive need for publicity, Facebook would have been perfect for that.”

The two women are transcendent in stature and continue to influence today’s culture; we asked Ms. Keogh how she thought they would fit into a society obsessed with celebrities. (The talented author’s response even referenced one of our original Anti-Preps!)

“Their attractiveness came from their accomplishments.  They were both very dignified women, they would *not* have done reality shows. Neither one of them would have done endorsements of things, unless maybe Marilyn Monroe was asking people to donate to something like the ASPCA.

They both also had mystique and you don’t have mystique when you’re followed around by TV cameras. [Marilyn] wasn’t like Kim Kardashian.”

One of the nicest things about the book has to be the exquisite illustrations by Meg Hess. 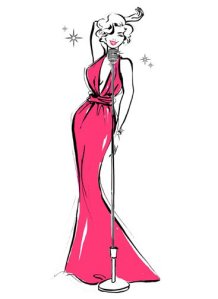 If the style looks familiar, it may be because Ms. Hess has also done covers for all of Candace Bushnell’s books, among other commissions.

We also spoke of designers the women might favor should they still be with us today. Ms. Keogh believes Jackie Kennedy Onassis would still be sporting Oscar de la Renta, perhaps Ralph Rucci, others creating classic, good-looking fashions.  She thinks Marilyn Monroe would be wearing Alexander McQueen were she twenty years old today, but in reality, probably more dignified labels like Valentino.  As with other assertions made during our conversation, her observations in this arena were spot-on.

The conversation on fashion delved into the issue of sizing and how we perceive ourselves relevant to that topic:

“American women get so obsessed with a number on a scale. A number is a number, it doesn’t give you beauty, or humor, or grace.”

Ms. Keogh again spoke of a vital element woven throughout the lives of both women, something sadly missing from the resumes of many or today’s most idolized individuals:

“What holds us to them is what they did, their grace and style, the way they kept going in spite of what was going on in their lives, their indomitable spirit.”

We can only offer an amen to that sentiment. Perhaps the most amazing thing we learned in our conversation with the author is that prior to her death Jackie Kennedy Onassis spent hour after hour in front of her fireplace, burning correspondence, piles of it. That is one way to ensure that private matters remain just that.

Back to the quiz mentioned above, Vanity Fair carried a copy of the questions – here is a small sample.

a) go for a walk on the beach.

c) pour gin in your tea.

b) no, we mean it—everything.

c) not that important—as long as you have a roof over your head and Veuve Clicquot in the fridge, you’re cool.

Click here for the quiz and you can start exploring which woman you most closely resemble.

We are excited to offer one of our treasured readers an autographed copy of Pamela Keogh’s book, via a special giveaway. For one entry leave a comment saying which woman you think you are most similar to. For a second and/or third chance to win, become a fan of the Preppy Princess FB page (if already a fan just let us know that) and/or the Jackie or Marilyn FB page, and for more entries follow us on Twitter, or follow Pamela on Twitter.

We want to extend an enormous “Thank You” to Pamela, for she is not only talented and gracious, but also delightful, much more fun than one might expect from such an esteemed writer.

With that we say g’bye until next time, and hope everyone enjoys a splendid weekend!

Next Target Designer & Another Argyle Adventure

Hello-Hello and Happy Spring Fever! It is so fantabulous we are officially decreeing today as…..

… Prepalicious, the feeling is utter bliss here at the Prepatorium; we hope the same can be said for your corner of the globe.

We start with news of the next designer collaboration for Target. The Boutique will offer another jewelry line, this one in tandem with the oh-so-wonderful Anna Sheffield, perhaps better known to some readers as the designer of Bing-Bang jewelry.

The Anna Sheffield for Target Collection launches August 30; it will be online and in stores through December 30.  Last year the designer teamed up with Urban Outfitters for a line. Below, a cuff currently in the Bing-Bang group. 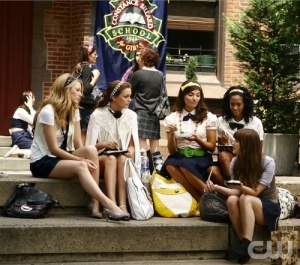 In addition to her own website, Ms. Sheffield’s work is available at Intermix, Shopbop and other retailers.

Speaking of Gossip Girl… we have a few updates for readers, starting with news that actress Leighton Meester has officially signed a record deal, with an album release expected this fall. We are more-than-tardy mentioning a fashion spread featuring Ms. Meester in the NY Times magazine. 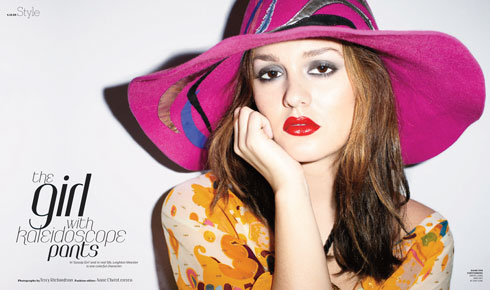 The Moment blog also has a story with the 23-year-old that fans may enjoy reading.

People has an interesting online update pegged to Monday’s return of Michele Trachtenberg’s character (Georgina Chapman) to the UES. One thing addressed in the story is what seems to be finds an incredibly high rate of intra-cast romantic relationships:

““I haven’t tasted or drank the love potion yet because I’m actually not dating anyone from the set,” Trachtenberg jokingly said. “But we all roll up with Red Bull in the morning, so maybe there is something in there.”

Just to prove we retain our capacity to cope with late-breaking news, we offer the latest for your consideration:

There is more in this article from The Daily Mail. Oh, what exactly does this have to do with preppiness, other than the possibility that is a Burberry scarf? Nothing.  Not a thing, dolls, we apologize.

We have an interesting Argyle Update today, if only because of the individual sporting the argyle:

Yesterday First Lady Michelle Obama was wearing another Junya Watanabe argyle cardigan. Does it look familiar? Readers may recall Mrs. Obama in another colorful sweater by the designer during the G2 trip to Europe in early April; if not, this post may be of assistance. 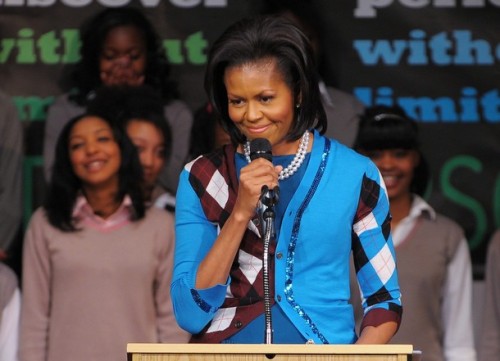 The designer is no stranger to argyle, it is one of the reasons we are drawn to his creations. Below, a vest from this spring’s Comme des Garcon collection for Colette.  But prepettes also know it’s not exactly Brooks Brothers standard issue.

Again the First Lady looks beautiful. We love the bright colors in her cardigan. However (you just knew this was coming) we are simply never going to adapt to daytime sequins despite intense counseling from the Fashion Herald and Wendy. We’re constitutionally incapable. It Just. Will. Not. Happen.

We close today with a look at some of Kenneth Paul Block’s amazing fashion illustrations. First, “Babe Paley in Mainbocher and Amanda Burden in Sarni” 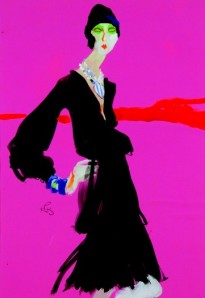 Mr. Block created magnificent drawings for W and WWD as the principle in-house illustrator for Fairchild Publications, frequently using members of the ‘jet set’ as subjects. Below, Jackie Kennedy Onassis in a Valentino jumpsuit. 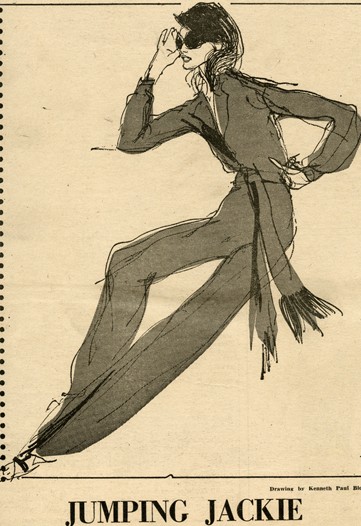 The artist also did numerous illustrations for upscale retailers like Bonwit Teller, Bloomingdale’s  and Bergdorf’s. In March Mr. Block donated almost 1900 drawings to the MFA in Boston.  For a real treat, pop over to the Museum’s Textile and Fashion Arts Facebook page and gaze upon the fabulosity. One can also check out Drawing Art: The Fashion of Kenneth Paul Block at their local library or consider adding it to their personal library.