We start with news about a favored brand that is expanding their product offerings. Serious expansion. We’re talking about Jack Rogers, makers of the ubiquitous Navajo sandal seen below. 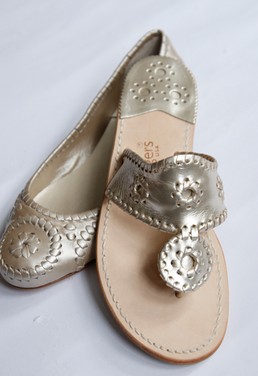 For those not familiar with the footwear, here is a brief explainer from this story in WWD:

“In resort towns like East Hampton and Nantucket, the Jack Rogers Navajo sandal has for decades been as much a part of the scene as tennis skirts and tunics. In the Sixties, the sandal was popularized by Jackie Kennedy.”

Those paying close attention to that photo probably already noticed something else: the new Jack Rogers slim ballet flat. Below we see another version of their new flat. 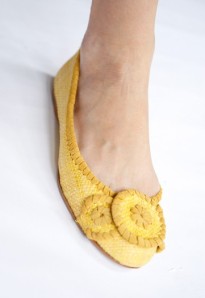 But new footwear isn’t the only thing on the drawing board for the company.  This story from Women’s Wear Daily (subscription req’d.) offers more information about plans for the Jack Rogers brand:

“…sportswear, dresses, handbags, shoes, boots and a wider selection of sandals, and the first Jack Rogers retail stores, for the upcoming resort and spring seasons.”

The new merchandise will be available at Nordstrom, Lord & Taylor, along with 400 independent boutiques already selling the brand; the plan is to expand this footprint to include:

“…Saks Fifth Avenue, Neiman Marcus, Bergdorf Goodman and other stores. Trousers, priced at retail at $170; cotton sundresses, $168 to $200; woven dress shirts, $148, and closed-toe shoes, generally $129 to $189, are among the items being offered. There will be also be some handmade, detailed ballet flats and items in more expensive skins, priced at $225. Shorts, T-shirts, purses, totes, clutches, jelly sandals, driving shoes, boots and moccasins are also being designed.”

On a personal level this is splendid news. But from a business perspective we are reminded of many recent brand extensions that have not fared well, many with disastrous results. The failed Ruehl stores Abercrombie opened so quickly come to mind, as do the continuing rumors that Crocs, following explosive growth, could soon file bankruptcy. Even smaller efforts like the Oilily expansion into the US was not successful.

However, there are several executives at Jack Rogers who possess solid resumes with experience at firms like Polo Ralph Lauren, Gap and Tory Burch. This leads us to hope that the broad brand extensions of the kind detailed above prove to be the exception, rather than the rule.  When we see the word ‘jelly sandals’ included in the new product line we cringe more than just a little.

Wondering where the new Jack Rogers stores might be going…?

“…. the first expected to open around February 2010 in Manhattan, followed by units in the Hamptons, and Palm Beach or Bal Harbour, Fla.”

We know quite a few folks who will be pleased with this news. Are you excited by the news? And thoughts on Jack Rogers Jellies?

We close with a fun tidbit we saw on British Vogue’s site, news that Christian Louboutin has teamed up with Ladurée, the famed French macaroon and pastry house. 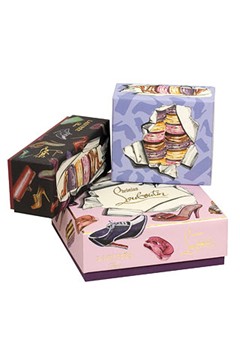 The luxury shoe designer has created special boxes for all those delicious goodies, they will be available in the UK this September, no word yet on the possibility of anyone on this side of the pond being able to purchase the designs.