Hello-Hello, isn’t it fab that Friday is upon us?  Although we are guessing some snow-impacted parents are not exactly rejoicing after multiple unplanned days with the offspring.

Lots of little bits and bytes to share today, we begin with news of the Jimmy Choo tennis shoes/sneakers/plimsets/trainers/what-nots.

For those seeking a Choo for their workouts, these are available in May; there are 8 different styles with pricepoints starting at $625.

And we also have an early look at advertising for Jimmy Choo 24/7, the new collection by Choo now available at Saks as well as Nordstrom. 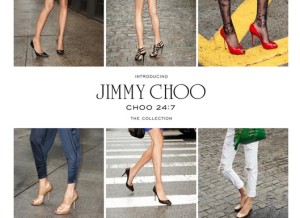 The 24/7 line is comprised of best-selling styles, many re-engineered (our word) to make them more wearable.

Fashion Week is off and running, getting fully underway yesterday despite impact from the insane snow and the sad death of designer Alexander McQueen.  Women’s Wear Daily has a story on designers getting ready for the big week.

Tory Burch preps for her show, which is early (for the fashion world) next Wednesday, at 9am.

Below left we see Tommy Hilfiger with two of his models and Thom Browne of Brooks Brothers Black Fleece.  Mr. Hilfiger closes out the event Thursday at 8pm. 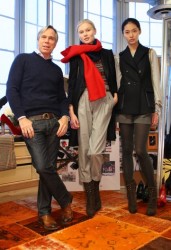 Other designers of note:

The story also explains plans to expand the number of Lacoste outlet stores:

Below, styles from the Lacoste Fall collection:

We are looking forward to seeing images from the Lacoste show tomorrow.

For those wondering how tough it can be at Fashion Week, below, the crush of photographers at BCBG demonstrates the  BCBG Max Azria show yesterday.

Here are a few looks from that show. 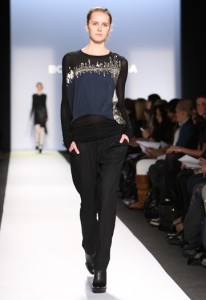 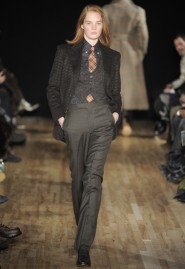 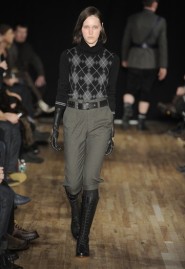 As described in the WWD review:

“Bartlett… had his woman dressed for a riding party at an English country manor: Tapered trousers, snug vests and plaid button-downs dominated, cut narrow and lending a tomboyish appeal.”

We liked much of what the designer sent down the runway.

Manhattanite Minnie Mortimer showed a limited collection earlier in the week as well. 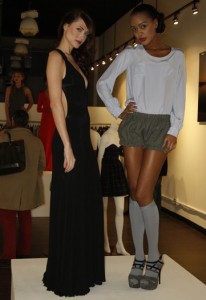 Ms. Mortimer’s designs hold appeal for us, we have spent more than a little time looking at her online shop!

Earlier this week we mentioned that Hermès was opening its first mens’-only store. That happened Tuesday as scheduled; we couldn’t resist sharing this photo of the giant tie adorning the store. 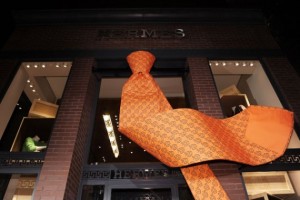 … personally, we would not be offended should we find the Cape Cod watch on our jewelry tray one morning.

For today’s Pretty in Pink we show Anthropologie’s Essential Tunic.

And we also must share one of our faves from Kate Spade, the designer’s Barrow Street Anabel. 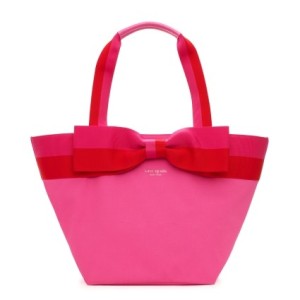 A closing Valentine’s weekend note: evidently Gossip Girl star Chace Crawford is without a date for the holiday, at least according to this story on an internet gossip site.

We’re guessing a few of our readers might be willing to help the young man out of his predicament.

On that note, we’re off until next time, hoping everyone enjoys a prepalicious weekend!