Help Me Understand – the October Edition

For those not entirely familiar with The Princess (and really, who is?),  occasionally we encounter what are euphemistically dubbed IFCs, “Intellectual Fashion Challenges.” It is at these times that we need you most. As always, we plead for your wisdom, your counsel, your insight, and your answers as we ask you to “Help Me Understand.”
.
One little detail: when doing the HMU we are frequently forced to discuss the “M” word, as the cost, sometimes perceived as an investment, factors into our horrified response addled thoughts.
.
It is items such as this that provoke so much confusion on our part: 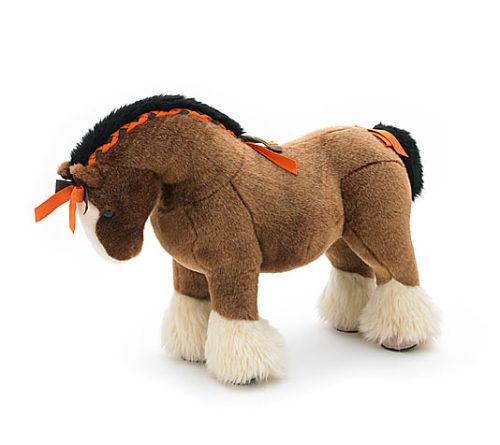 In case you were unfamiliar with this, we share a friendly, furry creature for your little one; the Hermès plush horse. Stuffed animal. It is a stuffed animal. This fine fellow comes in three sizes, the large (shown here) for $890, the smaller size is a mere $490, and the oh-so-economical petite is $370.  Of course one could purchase all three sizes and have a veritable herd to look after. Imagine that.

As we are on the topic of little plush creatures, let us examine this: 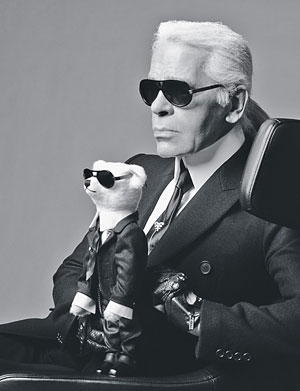 This is from Steiff, a firm we generally adore. This is a limited edition thank god for small favors, and they have been on sale almost a month, so if the little guy strikes your fancy you may have to hurry to Neiman’s or Bergdorf’s. You were wondering what precisely one receives for their $1500 investment? 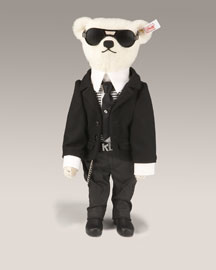 And how does Mr. Lagerfeld feel about being immortalized as a Steiff bear? According to W Magazine:

“Lagerfeld calls the Hamburg company’s longevity “incredible,” but he’s hardly surprised the toymaker dialed his number. The designer of Chanel, Fendi and Karl Lagerfeld collections has already been immortalized in a video game and as a lead figurine and plastic toy.”

(Full disclosure: TP finds the creature to be cute. We apologize, but we do. No fears about us adding him to the family, but we just cannot lie.)
.
Our next amazing item, on that triggers a severe case of Logophobia. We mean severe. And it’s chronic. Also unrepentant. Behold the Louis Vuitton Farandole Hair Clip: 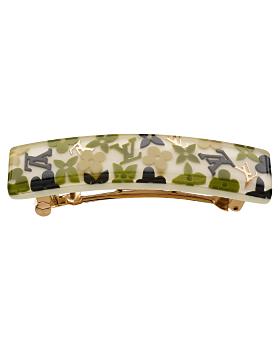 Of course, there is always a plethora of designers eager to bank your pin money in exchange for providing them with free advertising, in this case D & G, aka Dolce & Gabbana. Here we have the D&G Script Logo sunglasses via eLuxury. 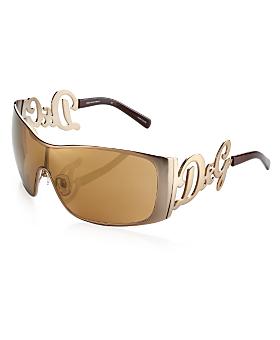 And to wrap things up, a look at something Posh, er, someone who used to be named Posh, Victoria Beckham with husband David Beckham. The couple was promoting their new signature double-fragrance line at Macy’s when the photos were taken a few weeks back. 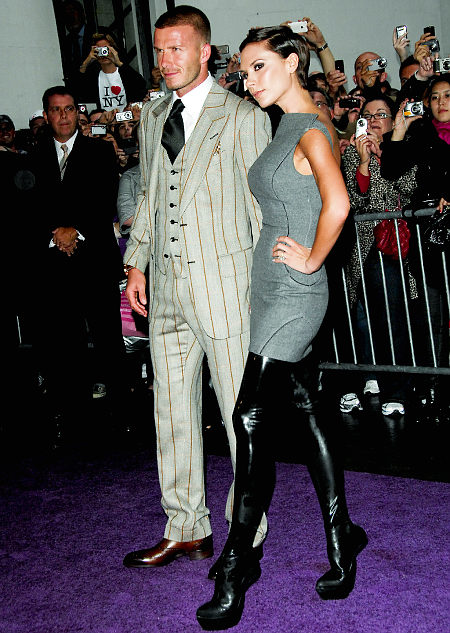 Naturally you would like a closer look at the thigh-high PVC boots. 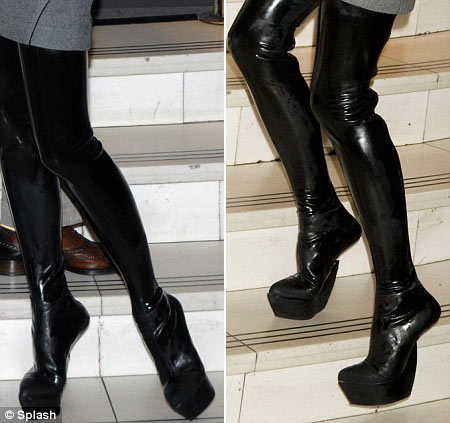 The Antonio Berardi boots with very high heels are 5-1/2″ off the ground… except there are no heels. That is the best way we can describe it. The boots would run approximately $5,736 and are available by custom order only. To be fair, we remember reading somewhere that Ms. Beckham actually found the boots to be fairly comfortable, and the lack of the heel is what she felt made them bearable. Regardless of comfort, they make quite a statement…which is the hoped-for outcome of the whole exercise, don’t you think?

We say “G’bye for now!” and leave you with our final items, the Gucci logo bags. 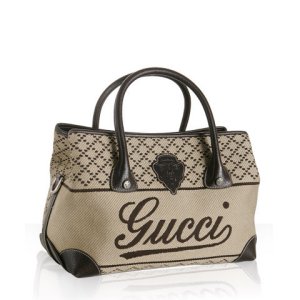 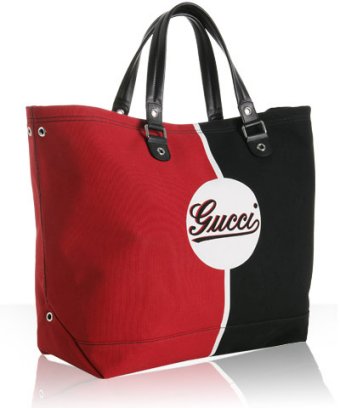 Discreet? Understated? We think not.

Filed under Help Me Understand, It's Just Not Done, Logos

Help Me Understand #2: We Need Help with Sex and the City “Style”

If it’s May then it must be time for another installment of “Help Me Understand,” our little feature asking, well, “What were they thinking?” And it would hardly be an edition of HMU (Help Me Understand) if we did not start out with a little something from Alexander McQueen, and oh my gosh, what do we see…? Could it be…? A pair of …? A pair of outrageous shoes? The Princess is kicking off an edition of HMU with a pair of shoes. Be still my beating heart. And once again the lucky designer is Mr. McQueen, as we gaze upon something that appears to be an objet d’art, almost museum quality in its design, clearly more suited for display in such an establishment, most definitely not something to adorn anyone’s precious little tootsies. Honestly. 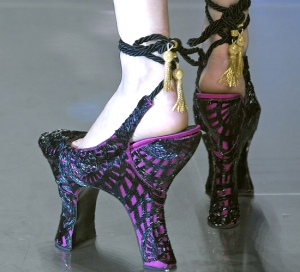 Allright, inhale. Exhale. Deep breathing. Okay, here we go. You see, The Princess does understand she is about to tread on hallowed, dare we say sacred ground, so please (puh-leeze) TP begs, no more email death threats? (We ask you to consider the possibility, merely the possibility, that the entire SATC wardrobe topic is being taken a tad too seriously if one’s blood pressure becomes that elevated?) 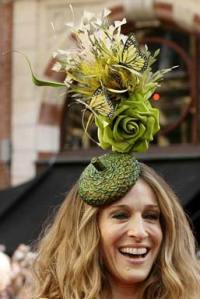 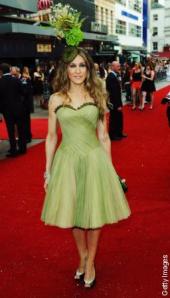 Yes, today The Princess asks the question, “Help Me Understand the Sex and the City Fashion Disasters Designs,” as she is more-than-perplexed by the extraordinary fashions in the film, as well as some of those worn by the stars of the movie to its London premiere. For example, Sarah Jessica Parker was lovely in an Alexander McQueen dress and heels (you see, The Princess can be ‘fair and balanced’ on the topic of Mr. McQueen!) at the movie’s London premiere, but then there is the issue of the Philip Treacy hat. We are familiar with brilliant Treacy creations of the past, absolutely gorgeous designs. In fact he has designed some utterly divine handbags, very tailored, clean lines, structured, and yours truly is more than ga-ga over them. And we realize Ms. Parker was expected to “push the envelope” in her attire and accessories. But to be honest, The Princess’s immediate reaction was (and remains) no pun intended, what was up with that hat? However, in an effort to demonstrate equanimity we’ll accept this was the height of fashionable good taste and move on to the issue of style (there’s a liberal use of the word) in the film itself, where it would seem we encounter the following: 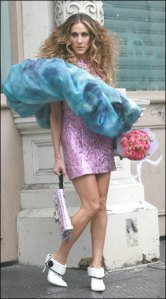 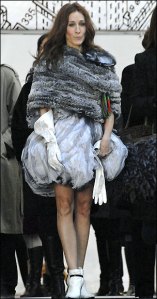 And thus the debate begins. The Princess has been blessed (or cursed) with substantial exposure to fashion over the years from ready to wear to couture, Tarjay to Barneys, American to European, all of it commencing at an early age, so she is not entirely without some background in the topic. And she is at a loss in comprehending the appeal of the garments seen above. Or below for that matter, other than to comment that when gazing upon the photo of the floral frock (below left) it looks like the designer took a tip from the Scarlett O’Hara School of Design: you remember, you rip the draperies off the wall and stitch up a little something. Except Katie Scarlett put together a lovely gown to wear to the local jail, while Carrie looks like she is wearing the sofa, or draperies. And up above, could we ask about the turquoise colored inner-tube-looking item? Is that technically an embellishment? An applique? What precisely is that? Pashmina on steroids? We are most confused by that. These unfortunate little numbers are not even flattering to Her Sexiness, IOMHO (In Our Most Humble Opinion), and SJP has a fabulous physique. Not that this was designed with you, or I, or Jane Q Public in mind, but can you imagine the ‘average’ female wearing this to, oh, say the Bridge Hampton Antique Show at the Historical Society in August? (Let us just utter our own little ‘OMG’ at the mere thought of that.) You know, your average Size 14 or so sort of shoehorned into this? This is not Yonkers and we don’t believe the cabbage patch fabric is a spandex blend, so let your imagine run rampant and you can see the horrors that might ensue. (We thought you might understand.)

It does not appear that all apparel in the film is excessive, self-indulgent or wretched, as evidenced by ‘Samantha’s’ white Dior suit seen below. In fact, we adore the Oscar de la Renta polka dots for Charlotte (Kristin Davis), and her sweet little trench coat in pink. Is it possible the majority of the crimes against the Fashion Gods are worn primarily by Ms. Parker? Is this something The Princess would not even consider questioning if there were a vulcan mind-meld and she suddenly absorbed all knowledge of all things SATC? Our ignorance is obvious as you would expect at this point in the post, to be sure. 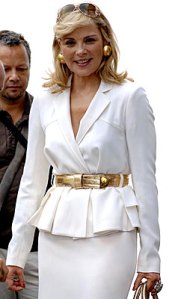 In stark contrast, the party frocks at the Berlin premiere (seen below) looked just stunning, although Kim appears a bit out of step in the bright orange frock; something’s just not right with the draping on that garment. The to-die-for ensemble of course, is SJP’s Roger Vivier dress, shoes and clutch, it is truly the epitome of understated elegance. Now the word is that the shoes were adorned with 22K gold appliques; this is something we read in the ever-so-fabulous Fashion Week Daily.

In the interest of full disclosure TP does feel the need to reveal that she is something of a SJP fan, admiring of her capacity to rebound after being dropped by the Gap and create an astounding business with her Bitten clothing line. We hold no grudge against Ms. Parker whatsoever, let alone anyone in, or associated with, the film or television series. We just don’t understand all the hoo-ha, so to speak (that’s a highly technical term, hoo-ha) about the fashion in the series and the film. 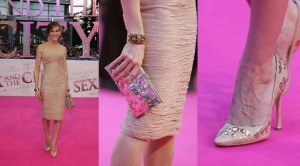 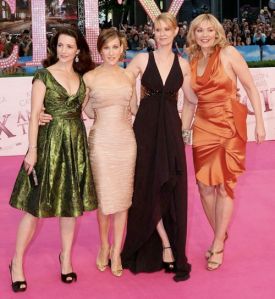 At this juncture TP must cease her comments on the SATC style topic, although she is more than eager to hear your opinions on this issue as she is most confused and would like to understand. We leave you with a shot from season 1 for your viewing pleasure. 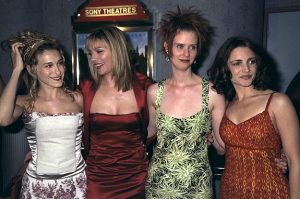