Party Frocks, or When Bad Dresses Happen to Good People

Hello-Hello and welcome to a Monday. Most. Assuredly. A. Monday.

However, it could be worse, so we moved ourself to the NWZ (No Whine Zone).  How about we chat about party frocks instead of weather, shall we? (Of course you know right where this is going, no surprises here.)

Of course – last night’s Golden Globes!  But first and foremost, we do have something for our Help Us Understand category: can someone, anyone, help us understand how event planners responsible for the Red Carpet portion of last night’s festivities did not order a tarp? No one at the Hilton thought it a good idea to have a Plan B? Perhaps a tent? Anything? Below, Jessica Lange arrives amid a sea of umbrellas.

We understand the sun was out most of the day, but as Women’s Wear Daily put it:

“…stars running for cover and publicists unfurling umbrellas as they tried to salvage the red carpet photo opportunities. (Although rain was predicted for over a week, producers decided not to tent the hundred foot long red carpet at the Beverly Hilton hotel.)

Look what it did to Gabourey Sidibe’s lush green gown by Kevan Hall:

“We’re idiots standing in the rain out here.”

Of course we were delighted to see our beloved Mad Men take home an award for best Drama.

Some were surprised to see Don Draper Jon Hamm sporting a look considered ‘bohemian’ and probably not allowed at any ad agency in the early sixities.

Mr. Hamm is seen with his wife, Jennifer Westfeldt.

Regular readers know how highly we think of Mad Men’s Joan Holloway Christina Hendricks, but we were not fond of the garment created for her by Christian Siriano. 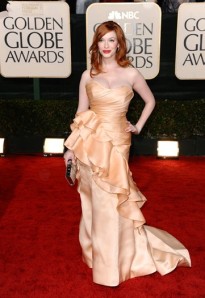 But Ms. Hendricks’ hair and makeup were nothing short of spectacular.

As The Consort said, “She looks like porcelain, doesn’t she?”

We are on the fence about the Lanvin dress Betty Draper January Jones chose for the evening: 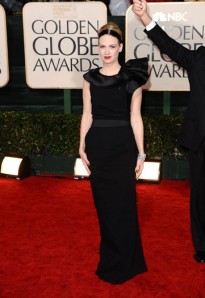 There’s no waffling on where we are with that headband — it did not work with the dress (too much going on) and detracted from Ms. Jones’ stunning looks.  We thought it was sweet her father was her escort for the evening, he looked just happy as a clam.

In our “was this really necessary?” category, Jennifer Anniston:

Much as we adore Valentino, it seems the actress could do with a “less is more” refresher class.

We were also happy to see another favorite win, Julianna Margulies took home the Best Actress in a Television Drama award for her starring role in The Good Wife. More good news for the show, CBS has ordered a second season of episodes for the hit Tuesday night series. 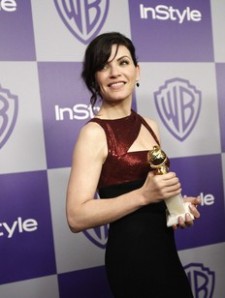 This is going to sound awful, but as soon as we saw darling Jayma Mays in this gown we thought about spider webs.

The folks at PopWrap make the point well that in this case, it wasn’t Pretty in Pink:

“The night’s least flattering shade turned a duo of dresses, and the divine women wearing them, into prom night casualties. We’ve come to expect much better from both Diane Kruger and Lauren Graham!”

And is there any point in us commenting on this young heartthrob’s spiky do?

For those keeping score, Mr. Lautner was in Calvin Klein Collection. Also in attendance and presenting an award, Gossip Girl’s Chace Crawford.

Ummm… he looks rather dashing, no?

Victoria Beckham’s growing emphasis on elegant lines is evident in the dress selected by Courteney Cox-Arquette:

We believe it is dress #48 in the current collection.

This is a very busy time for folks in the entertainment industry with the Critics’ Choice awards on Friday. Below we see Marion Cotillard wearing Christian Dior at last night (L), the French actress also wore Dior at Friday’s gala (R). 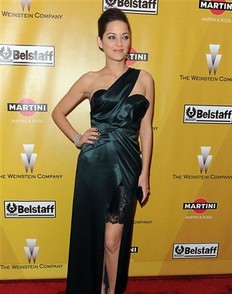 A few questionable designs made their way to last night’s after-party, beginning with Ashley Olsen, in a dress from Erdem. 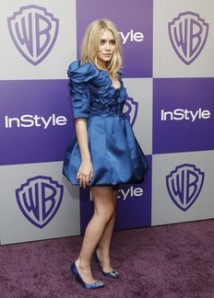 Regular readers can guess what The Consort said as soon as he saw Malin Akerman: “oh, she got it at the drive-through car wash!”

Generally Vanessa Hudgens looks lovely, but not last night in this Alberta Ferretti.

Another not-quite-right look from Valentino on Amanda Seyfried: 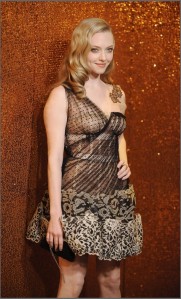 We leave you with a little something to brighten a rather dull and dreary day:

This is the Umi Whale key fob from the Leather Prince on etsy.  Wouldn’t it be fun to have him swimming around your palace?