Hello-Hello, we hope everyone enjoyed their extended weekend.

We begin with a sneak peek at a very few items from the oh-so-secret Missoni for Target collection. The retailer has been even more tight-lipped than usual about this particular collaboration, those invited to the preview were forbidden to take photos of any kind, nor were they supposed to disclose too much information on the collection itself, what sort of products were being created, etc.

Thanks to a Tweet from our friend Madeleine at the always-fabulous In New York Paris Tomorrow blog, we have a few images of said collaborative collection. 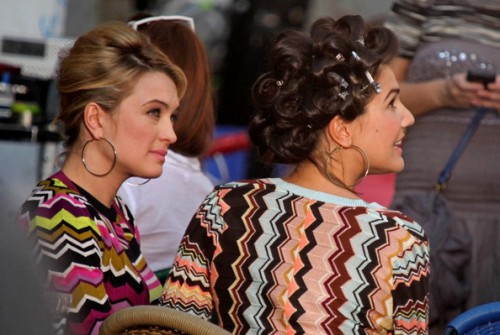 Apparently the photos were taken by a paparazzi when seeing commercials being shot for the campaign, awarding Targét an honorary “Best Laid Plans of Mice and Men….” award.  Above and below we see Margherita Missoni, she will be featured in the advertising campaign. 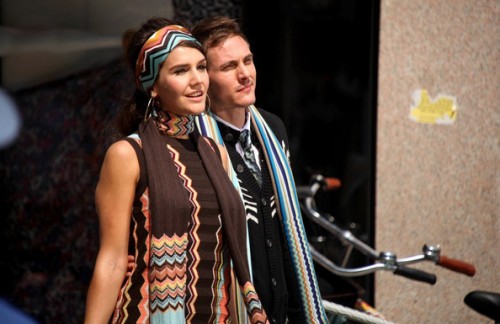 Ms. Missoni is the eldest grandchild of the company’s founders, and also the firm’s accessories designer. Here are two more quick images, again, via The Fashion Spot. 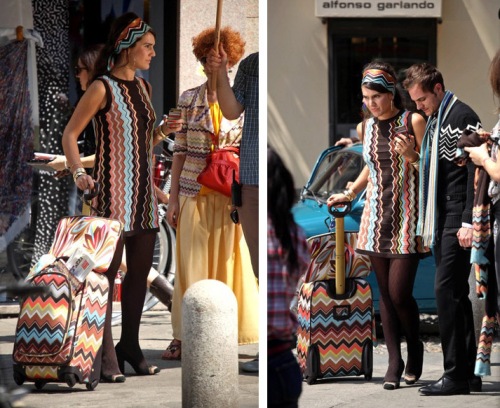 Clearly there will be luggage, scarves, shoes (I think) as well as some interesting pieces in the menswear group. With 400+ products in the collection it seems there should be something for everyone, presuming the quality is a notch above some of the retailer’s more recent design partnerships. To see all of the photos at the Fashion Spot, click here.

On a related note, the second of five hotels under the Missoni name has just opened in Kuwait, Curbed has marvelous photos if you are interested in seeing how that famous zig-zag pattern and bright colors translates. 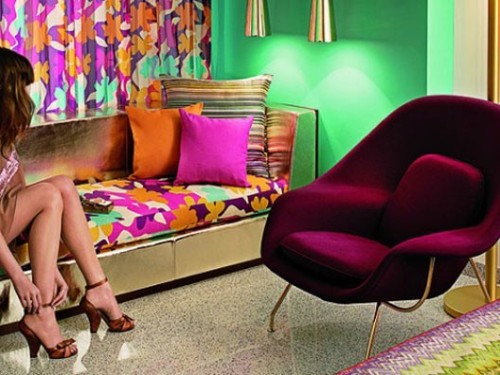 The past weekend is always big for auto racing, both here in the States as well as in Monaco, where the Grand Prix was held Sunday. Always an occasion bringing glitterati to the Principality as well as locals, below we see Princess Caroline’s daughter Charlotte Casiraghi visiting the pits before the race (L), and soon-to-be Princess Charlene Wittstock is seen congratulating the race winner, Germany’s Sebastian Vettel. 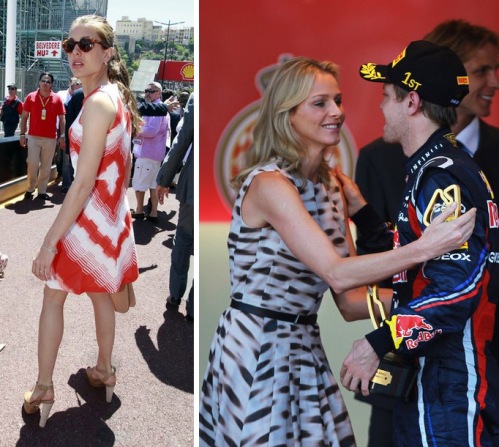 Ms. Wittstock was elegant at the Formula One Gala, we’re guessing she may be wearing Giorgio Armani Privé. 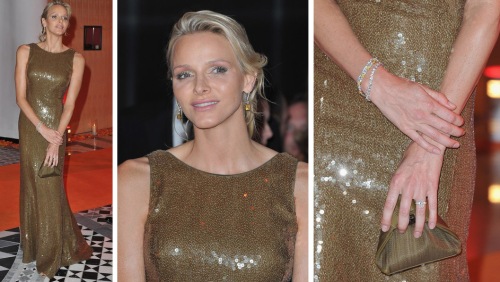 But our favorite ensemble for the evening was on racing legend Jackie Stewart. 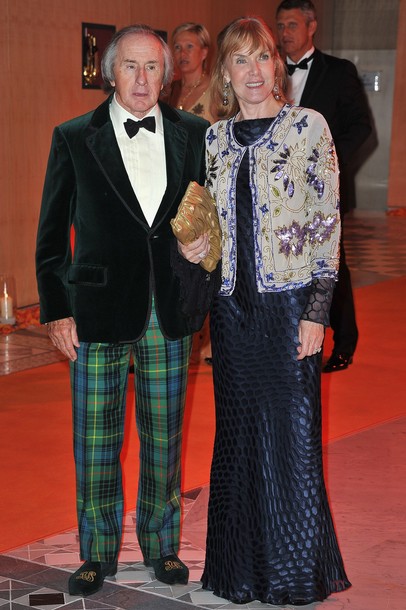 For those still seeking to supplement their wardrobe, we share a few quick Sales & Savings opportunities, the first at Net-a-Porter.

It’s the upscale boutique’s end of season sale, and the bargains abound, including some very affordable trinkets that might enhance your gift closet.  One the left we show the Marc by Marc Jacobs Enamel Bow earrings at 50% off (now $24) and on the right, Mulberry’s Heart Keyfob, also discounted by 50% (now $32.50). 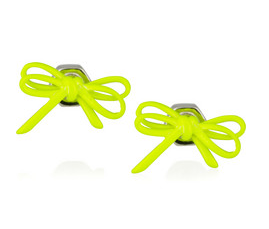 Staying with a Pretty in Pink theme, the Smythson Dreams and Thoughts notebook is 30% off ($294, originally $420) and the Vivienne Westwood Tartan Leather iPad Case is discounted by 50% (now priced at $110). 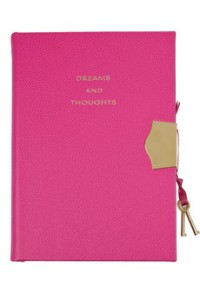 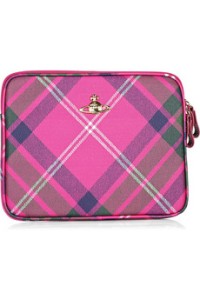 Today’s other fiscally friendly mention involves a new ‘flash sale’ site, but this one is a little different from the others. For openers, it is from über-merchant Amazon, called My Habit.  Additionally there is no nonsense about the site being “by invitation only” or “members only,” regular readers know how irritating your trusty scribe finds that practice. The site has been operational for a few weeks now, but we thought we would mention it today, as Tod’s Shoes are on offer.

To be clear, the classic driving moc by Tod’s is not being offered, but a style we are fond of, the Dee Ballet Flat is available, as are a few other styles.

Other sales coming up at My Habit include Bruno Magli for men, as well as several brands for women we enjoy a great deal, Lafayette 148 and Sigerson Morrison get underway this week. Most sales start at 9am Pacific time, Noon on the East Coast, usually running 3 days. Click here to learn more about My Habit.

We leave you with two royal notes, the first is next month’s Vanity Fair cover featuring a previously unpublished photo of Prince William and Kate. 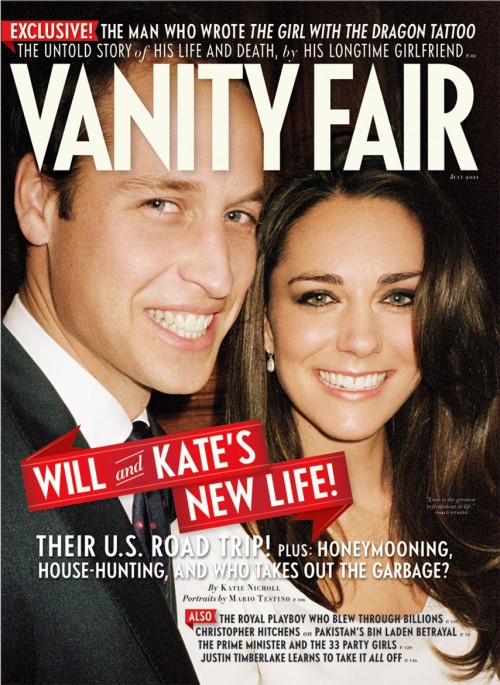 The Mario Testino image is from the photo session for the couple’s formal engagement pictures.  The magazine’s website has an interesting tidbit from the upcoming story accompanying the photo:

“Despite Will and Kate’s new official titles—dude duke and duchess, respectively—Will made it clear at the wedding that he will continue to be addressed as Prince William, meaning Kate by default will be Princess Catherine, reports Vanity Fair writer Katie Nicholl. This may rattle some family hierarchies— the Countess of Wessex had wanted to be known as Princess Sophie, but had been forbidden by the Queen.”

Also, those interested in the newlywed’s July tour in Canada with its quick visit to Los Angeles might enjoy this link to the “Official Royal Tour” website.  The itinerary is posted, as well as photos from previous Royal visits. We were a little disconcerted after clicking on the ‘photos’ link, this was the first photo that came up. 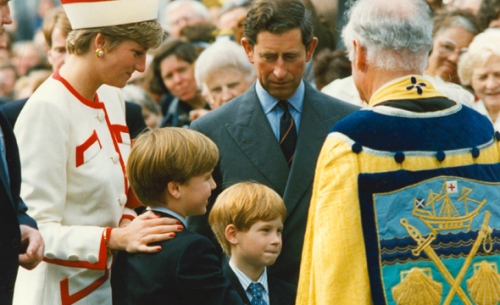 That is from the 1991 visit, the site explains the historical images will be replaced with photos from the tour as soon as possible. We do love that impish look on Harry’s face.