Hello-Hello! We hope your week is progressing splendidly, and that a touch of spring has entered your spirits, if not your habitat!

Before anything else, we must thank the one and only Preppy Player, who was much-too-kind in bestowing the Kreativ Blogger award on TP!

Thank you Miss Player, we are flattered by your generosity!

Today we have a jumble of all things preppy, or something akin to that, so let’s jump in with the topic near and dear to almost everyone’s pocketbook, the cost of enhancing one’s wardrobe.  (Yes, we are completely suspending the ‘no discussion of the M-word’ rule, as it is simply too top-of-mind and relevant to today’s content. So there.)

Regular readers may recall our posts last November and this January about permanent price cuts being implemented at J. Crew.  One example we shared was the Jane suede ballet flat; its original selling price was $98, less than what Crew previously charged for similar shoes. (One note: the Jane style flat is now marked down to $59.99 as part of the company’s Final Sale; this season’s version of the shoe is the Marjorie flat.)

The featured merchandise is below $100; there are links for both Men’s and Women’s “gratification” items.

Now other retailers are sounding the same theme. Lacoste says they will be lowering the price of some merchandise, according to a column Jeanine Poggi recently did for Forbes.

We are speculating the sweaters being referenced are similar to these, from last Fall’s collection.

Originally priced at $135, the Long Sleeve Cable Knit Sweater is now $68.99 in most colors in Women’s sizes.  The Men’s Crewneck version of the cable sweater is on sale for $73.99, marked down from $155.   One thing Lacoste is promoting heavily for Men this Spring?

“Madras… the Preppy Classic” is also featured as a trend for Women.

We’re not sure how flattering this madras High-Waisted Skirt will be for most, that waistband could prove a little dicey.

Back to the Forbes story, apparently Lacoste plans to drop prices on more than just their sweaters:

“In spring 2010, Lacoste plans to lower prices in other categories, including its signature polo shirts.”

…along with upscale leather-goods firm Coach.

“Coach is also planning to trim profit margins, reducing its average handbag price to $300 from $335.”

As we mentioned in this post on their soon-to-debut Poppy line, Coach is using a variety of strategies to offer customers different price levels.

Perhaps the most frightening item in the Forbes story is the insight on other brands offered by a retail expert, Eugene Fram. His inside perspective on two companies near and dear to TP’s heart is chilling:

“In terms of pricing, some of the organizations are now on the defensive, like Saks Fifth Avenue and Tiffany’s,” he says. “It wouldn’t be surprising to see price reductions of 50%-plus in their attempts to avoid Chapter 11 proceedings.”

Also today, news of another magazine cover for stars of tv’s Gossip Girl show, but some may be surprised just which cover is featuring Blake Lively & Leighton Meester. Those with refined and/or delicate sensibilities may want to scroll quickly past the next photos as they are rather vulgar.  Perhaps we should have ascertained this from the title of the Rolling Stone story, “The Nasty Thrill of ‘Gossip Girl‘”.

For a moment we were a tad confused, sure we must be looking at images from an issue of W, as the article contains the requisite photos of the cast together in bed.

The story also includes Taylor Momsen and Jessica Szhor as well as most of the Gossip Guys, Ed Westwick, Chace Crawford, Penn Badgley.

Those interested in “more on the steamy cover shoot” can read all about it right here.

Because we feel the need to lift ourselves up and out of the gutter, we shall close with a bit of nautical accessory fun, prefaced by this Pretty in Pink, the Silk Blazer from Smythe: 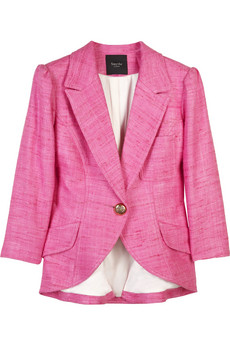 We adore Smythe jackets, for they fit like a glove while somehow managing to provide room enough to move around in without feeling like you are in a strait jacket.

And our spirited nautical item? Also from Net-a-Porter, the much-too-fun shoes from Stella McCartney.

Yes, much-too-hip for anyone here at the Prepatorium, and a little (ahem) over the top from a budgetary perspective, but really… aren’t they darling?

Until next time dolls, smiles at each and every one of you!