All About the Pink & MAC in Lillyland Update

As mentioned in a previous post, October brings an increase in the volume of ‘pink products’ we all see, in recognition of Breast Cancer Awareness Month.  Last year we remember the always-wonderful Adventures of a Southern Newlywed doing a post showing many of the ‘pink’ items available that supported varying breast cancer initiatives, and we’re borrowing her idea for today’s post! (Thank you Miss Preppy Newlywed.)

We begin with items we call cosmetics with a cause; below we show the Bobbi Brown Pink Ribbon collection. 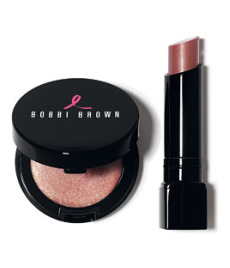 This set introduces a new lip shade, Blush Pink, and includes a limited-edition lip balm, Pink Crystal Glitter.  The set sells for $40, and there are no shipping charges, there’s a nice surprise! The company will donate $35,000 from their North American sales to the Breast Cancer Research Foundation.

Clinique offers the Great Lips, Great Cause collection of mini-lip glosses on a keychain.

The limited edition set also includes 2 charms: a Breast Cancer Awareness Pink Ribbon and a Clinique ‘C.’  (We’ll overlook any latent Logophobia symptoms in light of the greater good.) The set is a very reasonable $18, and $10 of that goes to the BCRF.  The company will also donate 25 percent of sales of its Dramatically Different Moisturizing Lotion to the BCRF.

Clinique and Bobbi Brown are both part of the Estee Lauder family; Evelyn Lauder founded the BCRF in 1992.

As part of our Friday Fun we offer a few Gossip Girl tidbits, first, the ongoing debate over this promo for the show.

Below, a sampling of Entertainment Weekly’s reaction to the ad.

“Freaked out yet? Confused at who you’re looking at? Concerned for the safety of any small children or ponies who may be nearby? Or does this inspire you to similarly tease your hair, slather on a terrifyingly dark shade of lipstick, and hang some door-knockers from your ears?”

Hhhmmm, some of the hair is a little frightening.  And our other tidbit, the cast is shooting in Chinatown this week. Below, actor Chace Crawford looks dapper on his way to the set.

Singer/actress Leighton Meester is wearing some serious platforms as she heads to her next scene.

We simply must share these next items for today’s Pretty in Pink, both from Louis Vuitton.

Nope, that was not a typo, Louis Vuitton is about to unleash debut a fine jewelry collection. Women’s Wear Daily (subscription req’d.) has more:

“Spirit of Travel collection — consisting of six jewelry sets, each with a one-of-a-kind necklace retailing for up to $2.5 million — will then be unveiled to the public on Oct. 15 at Vuitton’s flagship on the Champs-Elysées.” 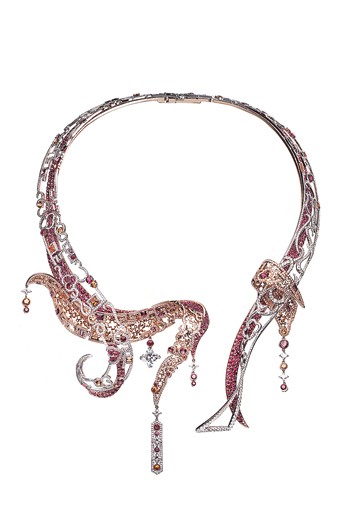 These are undoubtedly stunning when seen up close, they are amazing creations.

Previously we shared news (in this post) of the upcoming MAC cosmetics partnership with Lilly Pulitzer; their MAC in Lillyland collection is due out January 7. Now we have names for the actual items, and most invoke classic Lilly, like Joie-de-vivre and Optimistic Orange for two of the blush colors. Many readers will appreciate the Lipgelee names:

(How about that fourth name?) Also, we do know one of the two nail colors is Steamy.

This color is not a Limited Edition, but part of the current MAC collection and available online.

May everyone enjoy a sensational weekend!

Today we have an abbreviated blog, a Preppy Digest if you will, providing links on stories you may elect to pursue at your leisure. We start with a few more Signs of the Times; this first one you are probably well aware of as it has been widely reported by many of our favorite blogs and the media:

Remember this post talking about the price cuts J. Crew planned to introduce with their spring line? Reading an Associated Press story “After sales, will shoppers pay full price again?“ we learned that:

“But many…  predict early discounts on spring goods. The signs are already there. Bebe has cut certain spring sweaters by 25 percent, while J.Crew has marked some spring items anywhere from 25 to 40 percent off, according to Amy Wilcox Noblin, an analyst at PaliCapital Inc.”

Back in a November post we shared comments on pricing from Crew CEO Mickey Drexler:

“… our ballet flat category will start at under $100 for the first time ever…If you look at our January catalog, you’ll see a ballet flat assortment at $98. This year I think they started at $128.”

And to be sure, new shoes have arrived; they are priced at $98, as seen here with the Jane suede ballet flat.

How is your shopping psyche? Forever changed by the deep discounting, or are you still willing to make the purchase at full price? Or is it contingent upon circumstances, cash flow and need?

Speaking of discounts at Crew, the following landed in our email today:

This Final Sale promotion is online only, ends Sunday, and requires promo code FREESHIP09 for the complimentary shipping on purchases more than $100. Be advised we have read in a couple of places that once again the website is not functioning.

A quick mention is needed on Target’s next GO International designer, Tracy Feith, known for his beach and surf looks.  Below, Sarah Jessica Parker in one of Mr. Feith’s colorblocked dresses.

The line will hit online and in stores May 17, with prices ranging from $14.99 to $44.99.  In this courtesy photo the inspiration board for the line can be seen. 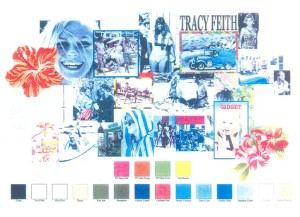 In an interview with WWD (Women’s Wear Daily), we learn Mr. Feith’s color palette for the Collection:

We like the way that sounds! The group will include one upscale item priced at $139.99, a cropped motorcycle jacket in leather.  The good folks at Fashion Week Daily have this photo of Whitney Port in a Tracy Feith during a Clinique promotion they covered back in 2007. (Full story here.) 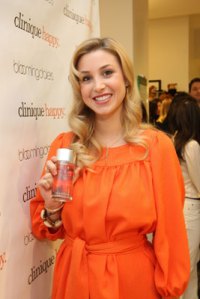 Grins and giggles until next time!

Filed under preppy, Preppy Fashion, Sign of the Times, Updates

Well, if we don’t seem to be encountering another preppy money moment here. We just read that Banana Republic’s new upscale line, Monogram, is closing its doors on Bleecker Street. According to the folks at Racked, American Apparel is moving into the space.  Below, the Monogram store.

The line received a fair amount of splash when introduced; regulars may recall The Princess wrote about it upon its launch back in April.  The line was described as being more sophisticated, more tailored, and more expensive; 30-40% more expensive in some cases.

This may not be as cataclysmic as it appears however, as we do remember reading back in April the standalone store was only scheduled to be open for 9 months, which would sync up with the timetable mentioned in the Racked story.

We would be more than surprised if the line performed at anywhere near hoped-for levels. Many loyal Banana Republic customers felt the collection was overpriced, with the merchandise providing little or no justification for the higher cost. Nor was there enough distinction between the Monogram pieces and original Banana Republic fare to attract a new following.

Below, a BR Monogram knot halter gown that is definitely not for the faint of heart, at least not in the Chroma Pink colorway.

As our Tuesday post focused in large part on the J. Crew struggles, and now today we are talking about Banana Republic, it seems ideal that Austin’s American Statesman recently did an interesting story advising readers how they can achieve ‘a James Bond look’ at J. Crew and/or Banana Republic prices.  In the story writer Marques G. Harper suggests:

“If Savile Row isn’t in your budget, other spots worth a look for Bond-style wares are Banana Republic and J. Crew.”

“….the BR Monogram specialty line has classic items such as cardigans, patterned pants, dress shirts, trench coats and a tuxedo (it goes for $650 compared with a Tom Ford tux, which sells for $4,650). In other words, get your Bond look for less.”

A photo accompanies the story, featuring a Tom Ford tuxedo and other items at Needless Markup Neiman Marcus.

In our continuing effort to provide information that is moderately entertaining, yet also fiscally friendly, here are a few more tidbits on Black Friday sales and discounts, as originally mentioned in the WSJ blog:

One cautionary note: as TP was initially reading this she neglected to notice it only applies to Tommy Hilfiger factory stores, or outlet stores, whichever term you prefer.

The new Gap advertising campaign features a personality from one of TP’s favorite shows, Mad Men.  Actor Jon Hamm plays the show’s always-natty lead character Don Draper; he is joined in the commercial by his real-life significant other, actress Jennifer Westfeldt.

Below, a photo of Mr. Hamm and actress January Jones, who plays Don’s wife, Betty Draper. 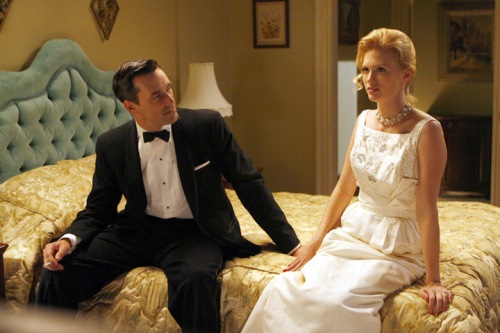 One more quick shopping tip, in this case directed at anyone who uses Clinique cosmetics: there is a Trina Turk-designed ‘gift with purchase‘ underway now at Nordstrom. The goodies shown below accompany any $25 Clinique purchase at Nordstrom, actually a fairly good arrangement IOHO, as the lines at the beauty counters can really be tedious when it is GWP time.  TP loves collecting these throughout the year (only as appropriate, when we genuinely require something from the line doing the giveaway, honestly!) and then donating them to a local shelter at the holidays.

Whether visiting the store in person, or in a virtual sense, don’t forget this is going on:

For today’s Pretty in Pink, this Leather Mini Wallet isn’t one you are likely to be lose inside the giant pile otherwise known as your purse! It is from one of TP’s favorites, Elaine Turner.

Don’t forget to enter the Great Giveaway, with $100+ in outstanding preppy gifts from Boatman Geller, the Preppy Princess, with the Summer at Tiffany book as a bonus gift! Just leave a comment telling us one friend you are grateful for and you are entered!

We hope everyone enjoys the rest of the weeknd!