“Soon?” Really….? It seems The Princess requires a new definition of ‘soon,’ preferably in cybertime, if you don’t mind. As in ‘cybersoon.’ How long would that be for an online retailer? We’ve been waiting an awfully long time it seems, and there’s still no sign of a functional website. We are beginning to feel like collecting our toys and stomping off to another playground. But we won’t, as that would be a completely inappropriate display of bad manners, and also because there aren’t loads of others carrying the merchandise they stock.

However, we won’t bash the giant that is J. Crew pitilessly (oh, and aren’t they happy to hear that good news?!), lest we tempt the e-commerce gods and they seek revenge upon the Preppy Princess, and we don’t want that! We just got ourselves up and running! Another reason not to beat up upon the preppy retailer would come under the heading of “Don’t kick them when they’re down.” and they are decidedly down. As in the site is down. Down. Non-functional. But let’s remember, they have apologized. Repeatedly. We received this in our email:

Unfortunately for J. Crew, national business media are beginning to pay attention to the story, and the blogosphere is beginning to light up like candles on a birthday cake at a senior center. The good folks over at Bloomberg news are on top of things; for their story they interviewed a company flack spokesperson:

J.Crew spokeswoman Margot Fooshee said today in an e-mail without elaborating. “In our eyes, any inconvenience to our customers is unacceptable,” she said.

“As a result, we proactively wanted to address them through an e-mail and on our home page, letting them know that they might experience some delays,” Fooshee said, adding that shoppers were notified the company was trying to fix the problems immediately.

The Bloomberg story does go on to point out that through today J Crew stock has dropped 40% in the last year. Ouch.

Another site covering the story is the Consumerist; they have been the recipient of a number of customer complaints. You can see their story here; if the complaints accompanying the post are even half-truths the company has a huge problem to correct. For minute-by-minute updates, there may be no better source than the JCrewAficionada; a fun site worth a visit regardless of your situation with the company.

Of course, it is easy for us to be gracious as we haven’t tried conducting any online business with the company. We don’t want to appear insensitive to the plight of any shoppers eagerly awaiting their merchandise, or attempting to initiate (let alone conclude) a return, not to mention any bridal parties possibly ensnared in the nightmare. (Let’s not even go there?!) For it does appear to be a nightmare encompassing every logistical process connecting the niche retailer with its customers, be it order input and management, inventory and supply chain controls, shipping, returns, accounting, call center and customer service ops, you name it – somewhere today it seems we have read someone’s accusations against J. Crew for failing on one or all of these levels. In the language TP learned in B school, this is a complete meltdown. Another ouch!

This just in – we checked the site and it seems operational. At least the “Be back soon” sign has disappeared from the virtual front door. The most that one sees related to this issue is the following on the bottom of the home page:

We’re just going to move along to our next story, an update on our post about the $150,000 Goyard Trunk with all fifty issues of Visionaire magazine inside. You may recall that we briefly mentioned the upcoming issue would honor Lacoste because this is their 75th Anniversary year. 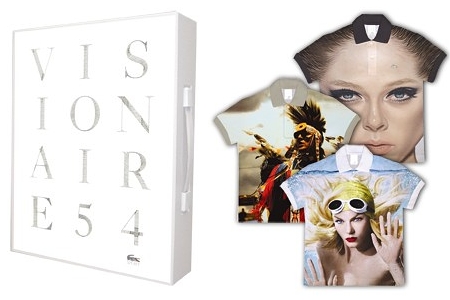 WWD carried an article about the upcoming issue of the magazine which provides some helpful information:

Each issue, which costs $250, will include three polo shirts from the collection (in small, medium and large) and all 12 images from the contributors, contained in a shiny large, white box that looks more like a suitcase.

Editor Cecilia Dean said Lacoste is sponsoring the fall issue and came up with the idea of taking the pages of Visionaire and printing them on its polos. “There is a total of 4,000 issues,” she said. “It will be available at select Lacoste stores around the world, bookstores and museums shops. This has been a work in progress since 2006 and it turned out even better than I imagined it would.”

We find the price for the magazine surprisingly low, considering what other issues have been priced at, even more so when comparing that $250 magazine cost with the approximate expense for three Lacoste polo shirts. If you assign an approximate value of $80 retail and multiply that by three, the result is $240, just about the price for the magazine. The magazine’s proven value as a collectible combined with the presumed allure of three Limited Edition Lacoste shirts would hypothetically increase the value of those pieces far beyond the $250 cover price for this edition of the magazine. Surprising.

You know, it is possible shoppers are becoming jaded by all of the Limited Edition and Anniversary merchandise out there, it just goes on and on for so many different things…hhhhm. Actually, there is quite a bit of the 75th Anniversary Collection on sale, at least online. For example, the Ladies 75th Anniversary Short Sleeve Exploded Croc Piqué Polo is on sale (below left), as is the Men’s Graphic Logo T-shirt (below right).

Here is a good shot of Coco Rocha on one of the Lacoste polo shirts, compliments of Visionaire. The printing process must have been extraordinarily meticulous, as it looks like the shirt has been hand-painted. 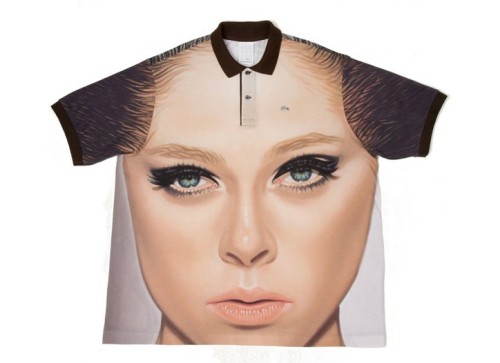 We move on now to good news from one of TP’s favorite places: Chatham. (Massachusetts, on the Cape.) The town is getting closer to banning chain stores and restaurants from the downtown business district. This is something voters would ultimately decide, but the wheels are turning and we are ever-so-pleased to hear that news. No, we haven’t removed the supersized “C” for capitalism from our tee-shirt; you know The Princess is very much pro-business and we remain that way. We just want some of our communities to retain their charm and ability to do business. Oh. Well. Okay then, I guess we are finished now with this topic. (The Princess Consort just came in and removed the Soapbox!)