Hello-hello, and welcome to a Wednesday.  Things are a tad mad here at The Prepatorium, orders flying out the door, The Wedding less than 48 hours away, tornado warnings.

We begin with a quick look at a new hair color for Gossip Girl star Blake Lively.

The actress was sporting the new color at “TIME’S 100 Most Influential People In The World” party last night. Below, a closer look at the color and a shot of her with Seth Myer.

The color change is for a film role, the stunning gown is by Zuhair Murad. Unfortunately it seems the long train was a challenge, more from NY Mag’s The Cut:

“Lively’s long silk chiffon train — apparently not intended for fast maneuvering — had become ensnared under the foot of none other than ubiquitous party photographer (and dear friend of New York) Patrick McMullan.

…McMullan, oblivious, walked away — with the train still stuck to his shoe. A second later, Lively’s train had left her gown and was trailing along after McMullan like a four-foot piece of aqua silk chiffon toilet paper. Martha Stewart was the first to recognize the problem. “Patrick!” she demanded. “Give her back her train!” McMullan, still oblivious, turned around and gasped, “Oh, I seem to have stepped on some lady’s train!”

One more celebrity sighting we want to share in honor of a few friends (as always, you know who you are, heh-heh-heh), Mad Men star Jon Hamm was spotted at last night’s Lakers game. 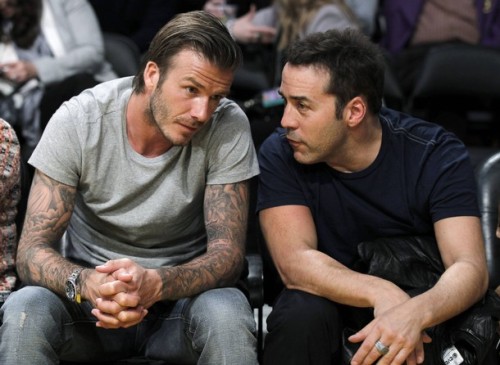 For those wondering why we are mentioning Mr. Piven, Mr. Beckham or the Lakers, three subjects previously not discussed in this space, it is an effort to make a segue to our primary topic, as Mr. Beckham must surely be on his way east for Friday’s festivities.

He is escorting his wife Victoria to The. Wedding.

As you might imagine, last-minute details and photos are now ricocheting around the interwebs at a maddening rate. We are at that point in the process where we have more photos of… people taking photos.

Many of the more recent photographs are shot from far, far away.

Above we see Prince William, Kate Middleton and Prince Harry arrive for the final rehearsal at Westminster Abbey.

“A slick press team and loyal friends have preserved Middleton’s mystique in the runup to the royal wedding, but plenty can be gleaned from what is not said”

Writer Patrick Barkham traces Miss Middleton’s background and the major influences in her life thus far. When talking about her style he writes:

“Salons in New York have reported customers asking for “a Kate” cut and her preppy look is credited with inspiring a Sloane revival. “

It isn’t the first time the bride has been described as possessing a ‘preppy style’ aesthetic.  The story shares an interesting fact:

“Middleton dresses herself “without any advice or input from the palace”, according to the royal source, and her style has attracted attention around the world.”

We don’t imagine that lack of input from the Palace will remain the case down the road.

This morning there was a full-scale dress rehearsal with the military, starting well before sunup. 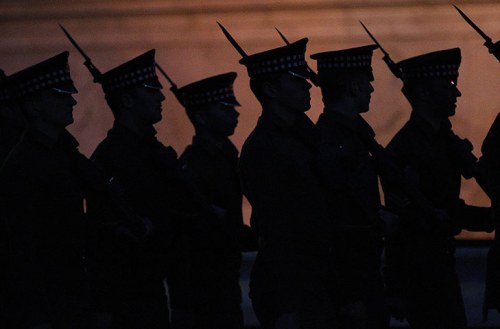 EPA via The Daily Mail

The decorating of the Abbey and environs also continues apace, below, a photo from The British Monarchy’s flickr photo pages.

A reminder, anyone can look at The Monarchy’s pictures, just click here.

JNVisuals via The Daily Mail

Above, the bride’s sister Pippa (also her Maid of Honour) and Carole Middleton head into London.

Next, a picture that has really started tongues wagging.

JNVisuals via The Daily Mail

Here’s why, from the Mail:

“…there was a sheaf of paper visible in the back seat of the car that included a passage from an unrecognised work.

While many of the words were obscured, it read in part: ‘With so much love within our hearts.’  While the passage could be from a separate reading, it opens the possibility that they have followed the example of many young couples and written their own vows for their special day.”

The only thing we can add is that the typeface does look like it is prompter size. We also noted Miss Middleton is in heavier makeup, we presume today also included lighting and makeup test shots.

Later today the bride was carrying things into Clarence House. 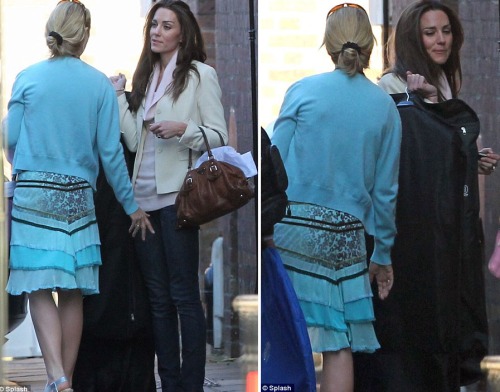 PHOTOS: Splash via The Daily Mail

Lots of things have also been moved into the family headquarters for the next several days, the Goring Hotel. 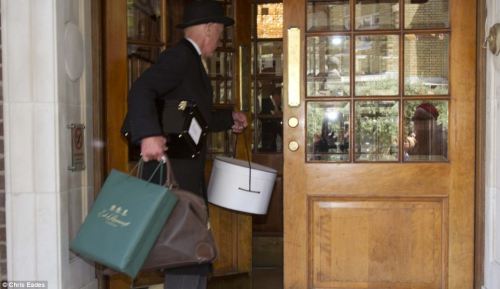 Chris Eades via The Daily Mail

The location is under continual police protection, there have been comings and goings all day.

But this has to be our favorite photo of the day. 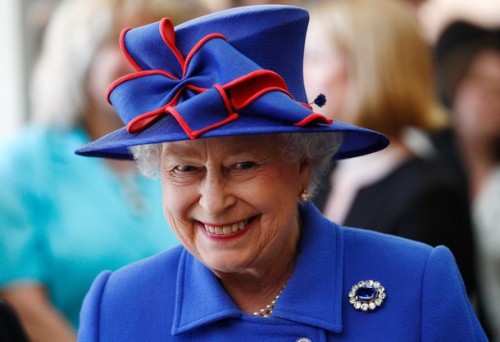 Here are a few other places to visit: