Hello again… and aren’t we wacky this evening, with back-to-back posts on party frocks in our Nation’s Capital?!

Many readers will already know this, but for those with an interest, the gown selected by First Lady Michelle Obama for this evening’s Inaugural Balls is by Jason Wu. 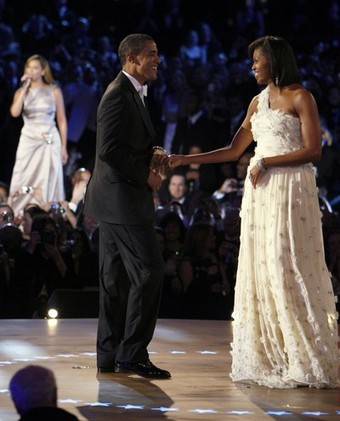 The 26-year-old designer created a lush one-shouldered gown that was a mastery of draping.

A close-up provides a better look at the intricate detailing Mr. Wu is known for; the dress is covered in Swarovski crystals.

The Taiwanese-born designer is no stranger to celebrities; one fan is Gossip Girl star Leighton Meester, seen in September at Wu’s runway show.

Earlier this year Mrs. Obama wore the designer for an interview with Barbara Walters: 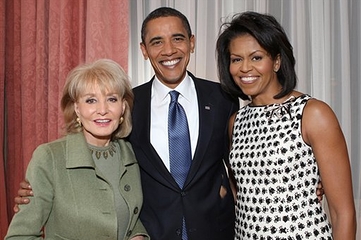 Below, the dress as seen on the runway for the Spring 2009 collection.  The raw silk print dress retails for approximately $3150, according to Cheryl Lu-Lien Tan at one of our favorite blogs, the WSJ’s Heard on the Runway.

And we have a second look at Ms. Meester in a Jason Wu creation:

And that dress on the runway:

Another celebrity fan of Mr. Wu is 30 Rock star Katrina Bowden, seen below in a photo with the designer in Teen Vogue. 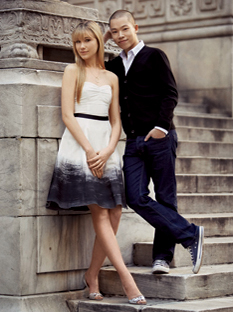 Let us not forget the dashing figure cut by the President:

As we first reported in this post last year, the President donned a single-button notch-lapel tuxedo by Hart Schaffner Marx. The Gold Trumpeter Tuxedo retails for $950. 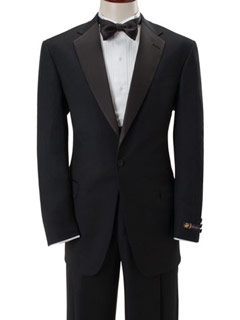 At Nordstrom it is called the Capital Collection Gold Trumpeter Tuxedo, retailing at $895.

We are still seeking information to bring you on the gown worn by Vice-President Biden’s wife, Dr. Jill Biden.

And we have a little more on the J. Crew ensembles worn by Malia and Sasha Obama earlier today, courtesy of the media mavens at that preppy retailer. All of the details one are available in this snooze news release.

“The Obamas continued to show their support for J.Crew at this morning’s Swearing-In, where the girls wore full looks from crewcuts by J.Crew and the new First Lady accessorized her outfit with classic olive green leather gloves from J.Crew. Malia featured a deep periwinkle blue coat, while her equally chic sister wore a deep coral dress under her sweet guava coat, vivid orange scarf and glove set, each tied with a velvet ribbon belt around the waist.”

Click on the link above for the entire text of the release; it does include details on additional items from J. Crew and Crewcuts worn by the First Family over the celebratory weekend.  That includes the Herbie Coats Sasha and Malia wore to the We are One concert on Sunday. The subhead on the release?

“MALIA & SASHA OBAMA WEAR COMPLETE CREWCUTS BY J.CREW OUTFITS FOR THE MOST IMPORTANT DAY IN HISTORY”

The release also advises us that:

Sunday’s concert was noted for A-level entertainers like Bruce Springsteen, Stevie Wonder and U2.

One of the best-kept secrets of the entire gala was the presence of several A-list bloggers, including Nautical by Nature and the Landlocked Mermaid.  Sources tell us they both elected to maintain a low-key presence in efforts to discourage autograph seekers and hangers-on.  (Ssshhh – more on their perspectives in a later post.)

Back to the cute coats: we do not think you will locate the coats on the retailer’s website. And any references to them on shopping search engines have either been taken down, or carry addendum indicating the coat is “no longer available.” We did locate one image of the coat; it does not fully match the images seen in the photos:

This shot offers a better angle: 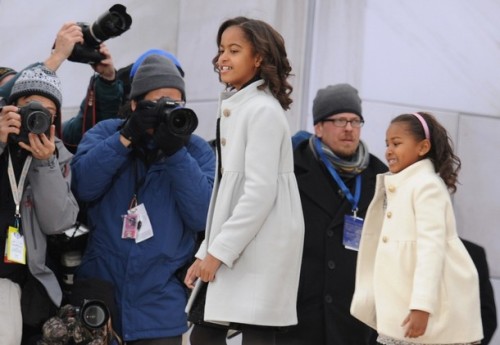 Lest anyone be concerned the marketing minds at Crew are not seizing the moment: 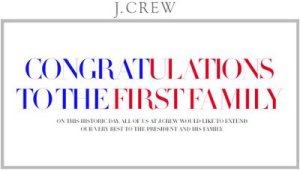 BTW, the marketing minds over at Barney’s wasted no time in adapting their front page as well, maximizing their connection with a now-famous designer they have supported for years, Isabel Toledo.

We’ll be back with more, including the Princess Consort’s take on Jason Wu’s preppy aesthetic, including some pretty in pink confections from the runway. No to mention the divine finds at the Market in Chicago.