Damsels in Distress and “A Song of Preppy”

Hello-Hello, welcome to a post on something generating a bit of chatter, Whit Stillman’s new film.

First, some background for those saying “Whit who?”.  Many will recognize Mr. Stillman’s work, he wrote and directed the 1990 film Metropolitan.

A refresher on that movie from Alessandra Stanley’s Times review, it also offers some insight into the indie filmmaker’s oeuvre:

Gauzily set in Park Avenue apartments and debutante balls sometime in the recent past, the movie follows a tightly-knit group of young men and women who assemble, in black tie and evening dress, at ”afterparties,” usually to contemplate their fate as a caste.

That was the first of a ‘preppy trilogy,’ it was followed with Barcelona in 1994 and The Last Days of Disco with Chloë Sevigny and Kate Beckinsale in 1998.

The Times recently profiled the writer/director and his new film in “Whit Stillman and the Song of Preppy,” the story shares this about the plot:

“Damsels in Distress” follows four college girls, Heather, Lily, Rose and Violet, as they grapple with problems ranging from love troubles to toxic frat-house odors and suicide attempts by education majors who insist on throwing themselves off two-story buildings. (“If they can’t even destroy themselves, how are they going to teach America’s youth?” Rose asks.)

Last Monday there was a screening of the movie in Tribeca, this story in The Times has more:

…screening at the Tribeca Grand felt as much like a boarding school graduation as a play for publicity by the Cinema Society, the evening’s host. But then, when the creator of a film credits his godfather, an Ivy League professor, for coining the term WASP, what else to expect?

Back to Bob Morris’s story about the screening:

Even the corporate sponsors were old-school: Town & Country magazine and Brooks Brothers. And the very young and adorable cast seemed to be on their very best behavior as they arrived, walking stiffly as if in charm school or the Easter Parade.

Below, we see Patrick Fugit and Megalyn Echikunwoke at the party following the screening.

Others from the Gossip Girl cast included Kelly Rutherford and Matthew Settle, on the right we see Ryan Metcalf and Adam Brody. 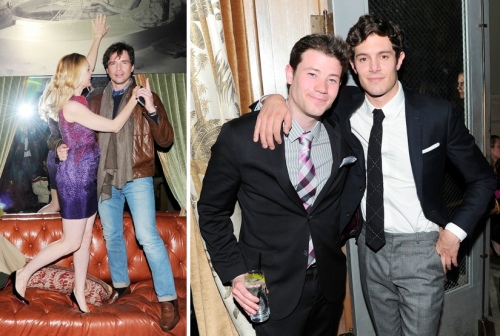 Here we see Mr. Stillman at work on the set. 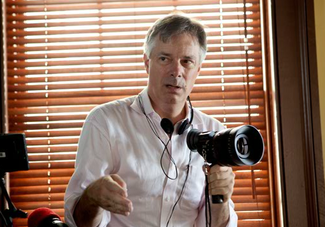 Chip Brown’s Song of Preppy article is an excellent read, nicely synthesizing the filmmaker’s background and its impact on his work.

Stillman remains as adept at confounding expectations as he was in 1969, when, a Harvard freshman, he escorted a debutante to the Junior Assemblies ball at the Plaza Hotel in New York with a Students for a Democratic Society button tucked under the lapel of his white-tie-and-tails.

… wry self-deprecation is one of the hallmarks of the well-bred WASP, and Stillman is a museum-quality specimen. Even in unbuttoned Los Angeles, Stillman adheres to the preppy uniform of loafers, jacket and tie.