We start with a very quick hit on WWD‘s (Women’s Wear Daily, subscription required for most material) story about the Kate Spade shoe line expansion.

“Though Kate Spade found success with its collection of preppy flats and party shoes, the New York-based accessories brand has been positioning itself for a bigger presence in the footwear world.”

The line’s new Design Director has a history with two other prep-relevant lines, Burberry and Banana Republic. What to look for moving forward? An added emphasis on boots, including some with bows.

The insanity that is Fashion Week has descended upon New York with the 2009 Fall/Winter lines being shown, although fewer design houses are participating. Just to set the scene, a bit from James Covert’s column in yesterday’s Post:

“THE perks at Fashion Week are taking a weird turn downmarket. High-powered fashion editors and retail merchants – who in seasons past have hauled off gift bags of Victoria’s Secret lingerie, Calvin Klein perfume and Estée Lauder cosmetics – will be treated this year to McDonald’s, Budweiser and Jell-O.”

Things kicked off Thursday with Monique Lhuillier showing 12 styles from her Fall RTW (Ready to Wear) Collection, including one with a darling bow we simply had to share!

We’ll chalk up the ripped hose (shown with almost every piece) to artistic license.

This morning the first show was Lacoste. 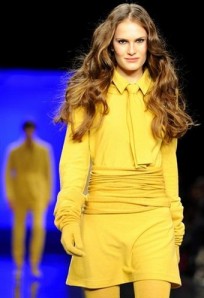 Of course, each season we attempt to predict the severity of Logophobia to expect in the coming season, in efforts to gauge how strong the innoculations should be, what strain of the disease to look for, etc. The Telegraph (UK), addresses the issue in their story on Lacoste’s F/W ’09 styles:

“The classic crocodile logo, originally introduced by the legendary French tennis star, René Lacoste, in 1927, was revamped as a larger, tone-on-tone motif, rather than the well-known, little green ‘crocodylidae’.” 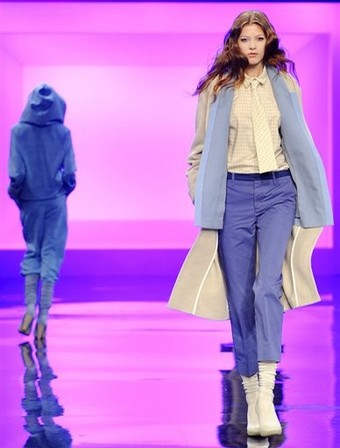 We did not sense any ‘wow!’ moments this go-round.

It could be that this year it is more about subtlety than big and bright splashes of exuberance.

First Lady fave Jason Wu had his show yesterday, and there are a number of pieces we adore, two in particular.

We dubbed the dress above the Fairy Tale Princess dress. And then we saw this one:

It is also a Fairy Tale Princess gown… lush, lovely, luxurious…sigh. A girl can dream, can’t she?

The designer dubbed as preppy by TPC (the Princess Consort) early on in the Michelle Obama dress frenzy had several other looks we are fond of, including this: 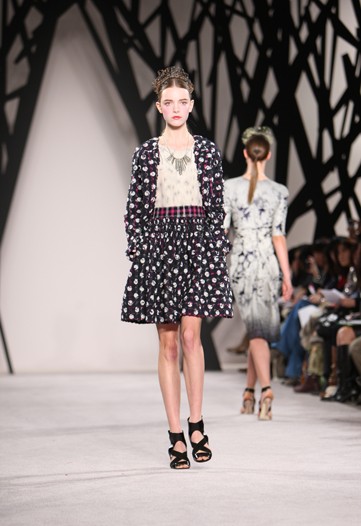 While not for us, the next frock is one we can see Mrs. Obama wearing.

BTW, for those interested in the very latest on Fashion Week, Project Runway winner and designer Christian Soriano is live-blogging for Time magazine; click here to take a look at Mr. Soriano’s bon mots.

Here at the Prepatorium we try to maintain a positive perspective, preferring to look at the upbeat more than the negative, but sometimes we simply must stop and ask: why?

High-waisted leather shorts, Gwyneth? What were we thinking?
And then there is the J. Crew spinoff label, Madewell 1937, and its collaboration with Shopbop on an upscale denim line.  Generally we adore Shopbop. But this?

The line debuts online next Friday (2.20.09) with pricepoints one would expect from a premium line as explained in the WWD story:

It can only be old age and decrepit thinking keeping us from falling for the Boiler suit. (?)
++++++++++++++++++
We shall close with more Pretty in Pink, a few in fact, from today’s Barbie Runway show at Fashion Week. We start with Barbie & Ken…

(Psst – did you notice the pink and green backdrops onstage?!)

Next, the shoes by Christian Louboutin: 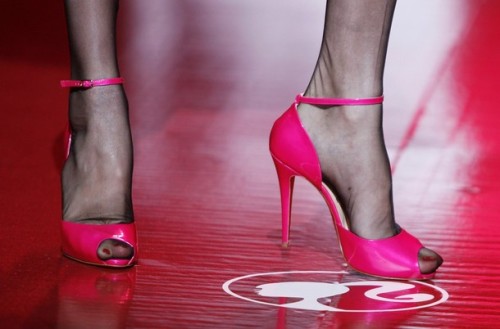 In the audience today at the show, Heidi Klum….

Others on hand for the 50th Anniversary show included Diane von Furstenberg, Annie Leibovitz and Julia Allison.  We cannot wait to read Suzy Menkes’ column on the show! The next photo shows a design from Juicy Couture, probably not our favorite look.

The next shot is during Friday’s rehearsal for the show; the dress is by Koi Suwannagate. 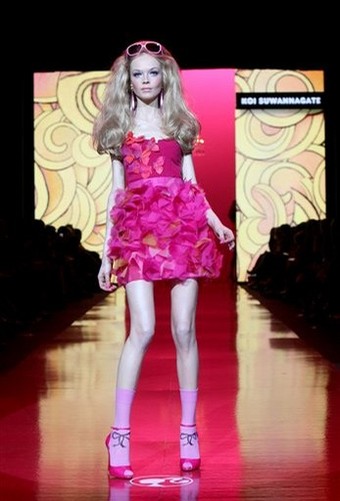