Hello-Hello and welcome to some Friday Fun!

We have all sorts of bits and bytes to share today, we begin with a peek at the party across the pond for Alice in Wonderland.  When they say ‘Royal World Premiere’ they do mean Royal. 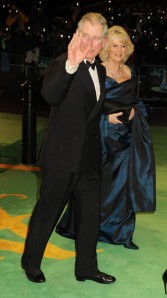 We loved the gown worn by Mia Wasikowska.

Even the fans were all dolled up. 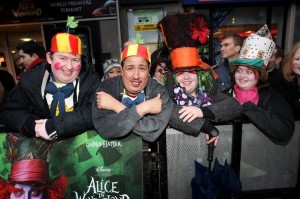 It is beginning to look like we may actually have to toddle on over to a theater to enjoy the film in its best light.

Next on the agenda, given any opportunity to post photos of Don Draper we continue our tradition of updating readers on Mad Men stars; Jon Hamm is in Vancouver enjoying the Olympics. 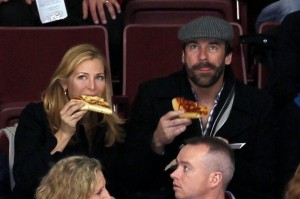 Above he is seen at the US vs. Canada hockey game last weekend, having a bite of pizza with longtime girlfriend Jennifer Westveldt.

We’re not clear which team he was pulling for.

Next, a look at the latest collaborative collection from Louis Vuitton. 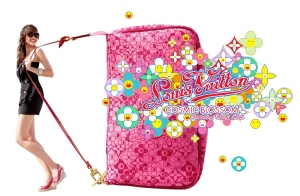 The limited edition line is called Cosmic Blossoms, done with Japanese artist Takashi Murakami. Some readers may recognize the artist’s name, this is one of many partnerships Mr. Murakami has done with Vuitton.

The advertising campaign features Daisy Lowe, with pieces in three rich shades that we adore. The bright pops of color look like Easter candy or ice cream sherbet. 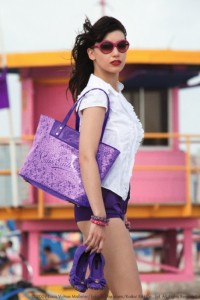 We also have a few more styles from New York Fashion Week we haven’t yet had time to share. 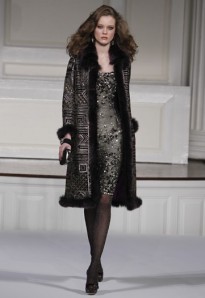 There is no way we could allow the Oscar de la Renta show to pass unnoticed, the man is genius. 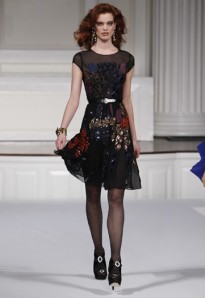 There are many reasons we frequently refer to Mr. de la Renta as ‘the master’.  Among other things, the designer knows how to use color and texture.

He also knows how to make a woman look, and feel beautiful.

Next, looks for a Lady: 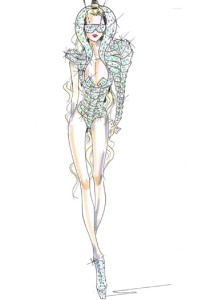 Lady Gaga, that is.

The entertainer sought designs for her Monster Ball tour from both Prada and Armani; above are sketches for two styles from Armani.  Below we see the entertainer in her ‘Telephone’ video.

We do love a post by the folks at StyleFrizz, pointing out one of the hottest trends in wedding gowns: 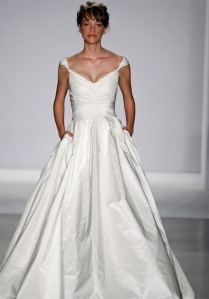 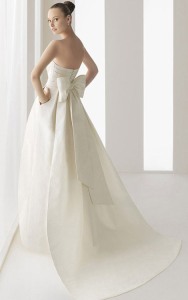 The genesis of the StyleFrizz post is actually found in this post at the Austin Wedding Blog.

As does the very popular Alexa cotton Cady.

Many of Crew’s gown have pockets, a smart move on their part.

TP is hyper-sensitive to the issue, having wept more than a few tears of joy upon the occasion of her marriage to the Consort. If we’d only had pockets, sigh.

We close with something provoking a little controversy:

You are looking at what’s left of the hair on speed skater Ryan Bradford’s head.  Evidently a small minority of people feel this is disrespectful to the American flag; as someone who might be considered hyper-sensitive to such things we disagree.  Another Team USA skater sort of tricked the athlete into the look; click here to see more about that.

On that note we say g’bye and share hopes everyone enjoys their weekend!