And The Award Goes To……

Hello-Hello, happy Monday and morning-after-the-Oscars. We admit to being a little bleary-eyed, it was a late night here at the Prepatorium.

But oh, there were party frocks. 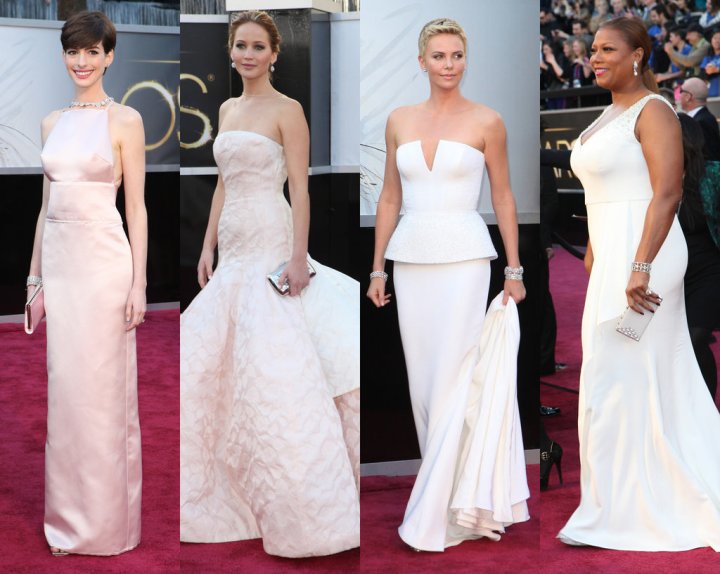 Two of the more talked about gowns were worn by Anne Hathaway, she was in Prada, and Jennifer Lawrence, who wore Christian Dior. Also seen above: Charlize Theron selected Christian Dior as well, it was Badgley Mischka for Queen Latifah.

Not everyone was fond of Ms. Hathaway’s choice, here is background from Women’s Wear Daily:

“….best supporting actress nominee Anne Hathaway, who said of her Prada gown, “I didn’t know what I was wearing until two hours ago. I tried on a ton of dresses and, at the end of the day, I loved the simplicity of it.”

Some of the biggest buzz of the evening surrounded the dress and part of the actress’s anatomy. This is how Tom and Lorenzo reacted, we must offer one cautionary note: the boys call it as they saw it complete with anatomical description.

Frankly, we think she dropped the ball at the last minute.

We don’t much like this dress. The pale pink doesn’t photograph well, it’s too satin-y and a little wrinkled, we don’t like that large waist panel, and we don’t like the neckline and how it interacts with that necklace. Then there are, of course, Anne Hathaway’s Imaginary Nipples. It actually took us a few seconds of staring at her chest (something that doesn’t always come naturally to us) to determine whether we were looking at Anne’s nipples or we were looking at some aggressively ill-placed darts. Even now, in the full light of morning, we’re not entirely sure how much of that is dart and how much is nip. Either way, she should’ve rejected this dress for that reason alone because the second she stepped on the red carpet, twitter lit up with “Anne Hathaway’s nipples” responses.

A more discreetly worded outlook from the Los Angeles Times:

We tend to agree with the general consensus that despite how beautiful she looked, how those Tiffany diamonds shimmered, it just wasn’t as “wow” as it might have been while also veering into terrain that could have been avoided.

Then there was the haute couture dress worn by Ms. Lawrence. Another bit of background, this young woman is the new face of Dior’s advertising campaign for its Miss Dior bag. 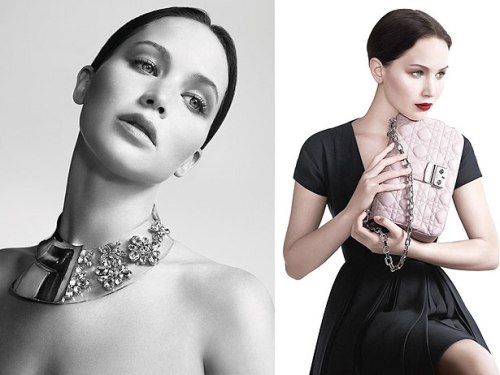 This is how the frock looked last month during the spring Haute Couture show in Paris. 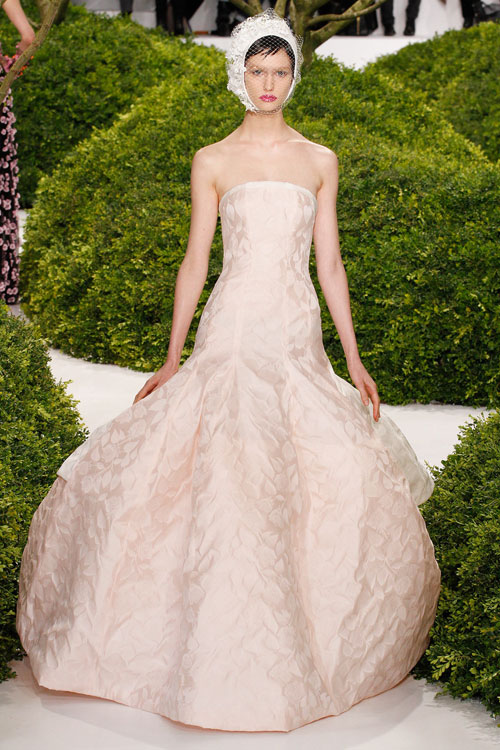 And here is how Ms. Lawrence wore the dress, described by the fashion house as “Dior Haute Couture pale pink and white silk bustier ball dress.” 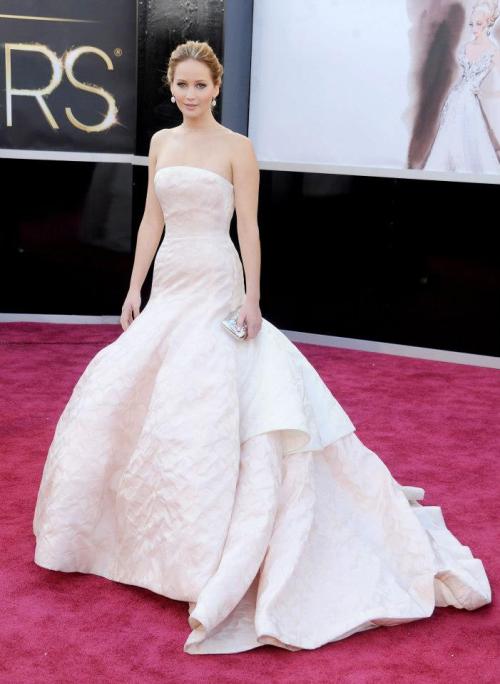 The little hiccup the actress experienced as she headed up the stairs to the podium is unfortunate, but Ms. Lawrence responded with aplomb and soldiered on.

There was no shortage of sequins last night, plenty of glimmer and glitter to go around.  We loved Adele in Jenny Packham, Naomi Watts was a standout in Giorgio Armani, Nicole Kidman wore her go-to designer, L’Wren Scott, and Norah Jones chose a Romona Keveza gown. 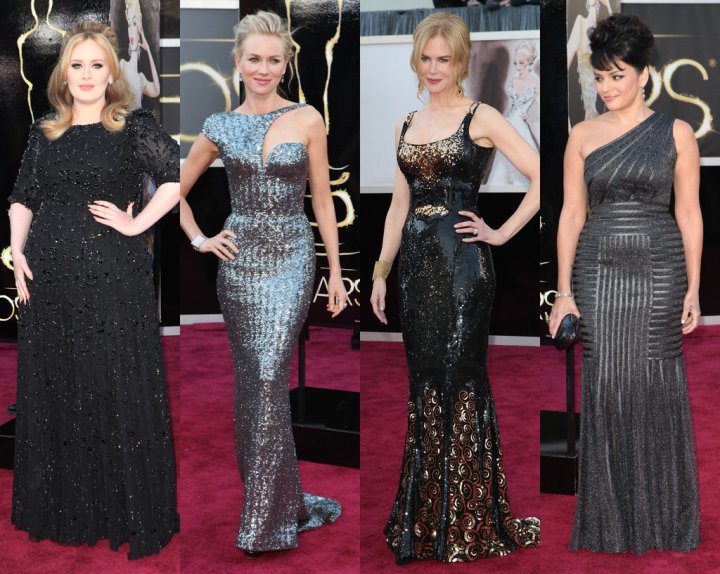 There were quite a few light-colored frocks this year. Zoe Saldana wore Alexis Mabille while Catherine Zeta-Jones was in Zuhair Murad (ummm… does Ms. Zeta-Jones look “different” to anyone?), Amanda Seyfried in Alexander McQueen, and Jessica Chastain in Armani Privé. 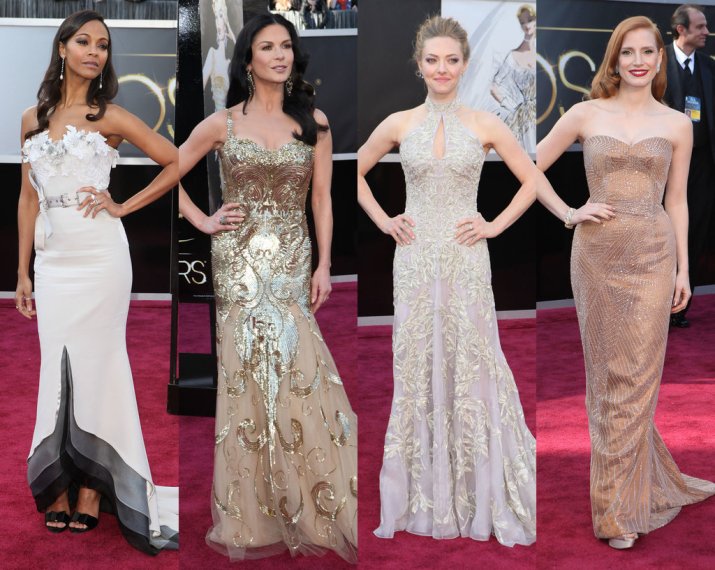 The Chastain Armani dress also generated some buzz, it seemed to have a polarizing effect. Many loved it but felt the color was just “blah,” or as a friend wrote on Twitter, “the color of old bras”.  Another perspective from one of my favorite style authorities, Robin Givhan in the Washington Post:

On the most photographed red carpet of them all, she steered clear of flashy designers, gossiped-about designers and controversial ones, too. Instead, she chose a classically glamorous gown by the godfather of red carpet style whose philosophy of celebrity dressing is: First do no harm.

The perfectly fitting dress almost disappeared against her pale skin. Her red hair hung in gentle waves. Bold red lipstick was her most prominent accessory. It all worked together to create a picture of subtle glamour — understandable, yet still aspirational.

The Los Angeles Times references both the Chastain Armani dress, as well as the one worn by Naomi Watts one photo up:

That is from a stellar piece by Ms. Givhan that delves into the branding of celebrities.

It was Valentino for Jennifer Aniston (who desperately needed an updo), a Versace dress was elegant on Jane Fonda, Sally Field also wore Valentino, while Fan Bingbing was exquisite in Marchesa. 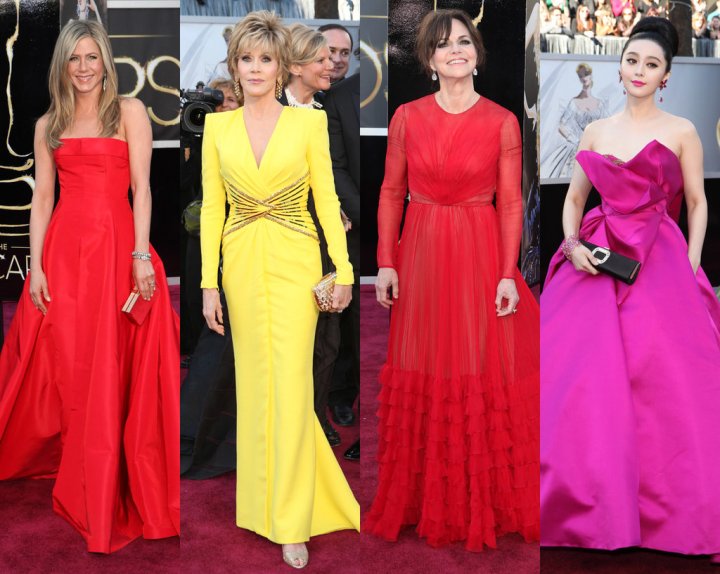 Reactions to any and every part of the telecast(s) were aired on Twitter.

Below we see Amy Adams in a Princess fave, Oscar de la Renta. Octavia Spencer wore Tadashi Shoji, Kristen Stewart had a crutch for an accessory on the red carpet, she wore Reem Acra, while  Georgina Chapman was gorgeous in one of her own Marchesa designs. 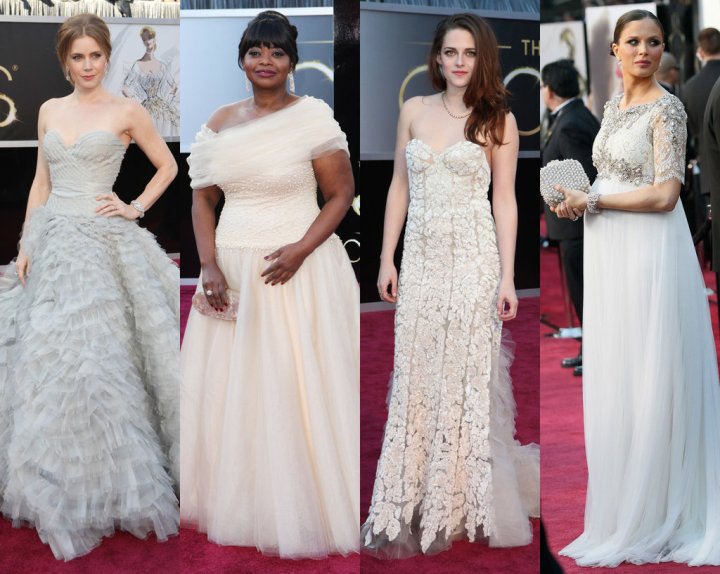 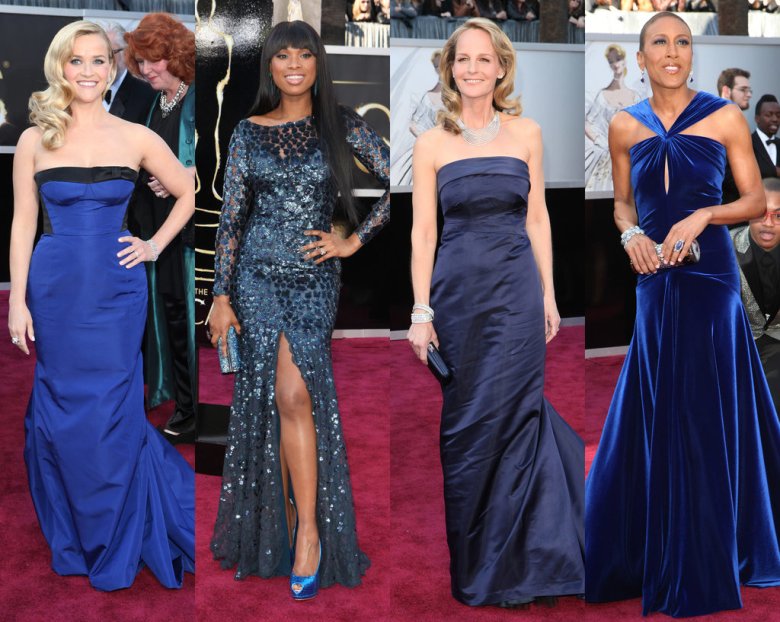 We did something different this year while watching the arrivals, muting the audio and merely watching the video on a variety of networks. That eliminated the annoyance factor of the “personalities” on E! and elsewhere, allowing us to revel in the pretty pictures, accented by the running commentary on Twitter.

The elegance wasn’t limited to the ladies, below we see Richard Gere looking splendid in Armani, it was Prada for Daniel Radcliffe, Chris Tucker was smashing in Tom Ford, we do not know who Joseph Gordon-Levitt’s designer was. 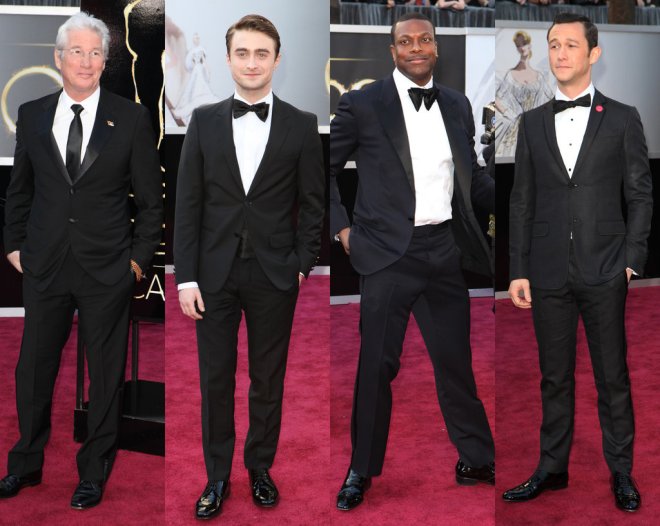 There were also many well turned out couples attending. 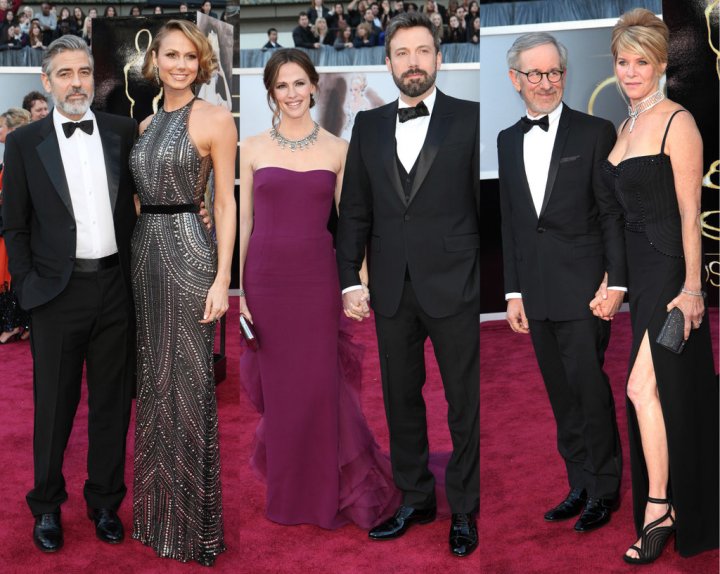 George Clooney was in Giorgio Armani while Stacy Keibler wore Naeem Khan. It was Gucci for both Ben Affleck and Jennifer Garner, Steven Spielberg wore Dior Homme, we aren’t sure yet who made Kate Capshaw’s dress.

To see all of the Red Carpet looks (570+), visit the Red Carpet Project from the New York Times, it is outstanding, the coverage is not limited to last night, there is a wealth of information and photos from previous ceremonies.

This year we really saw the impact of social media, especially with photo-sharing site Instagram: Jennifer Hudson posted this photo on her Instagram account as she headed out the door with her sister. 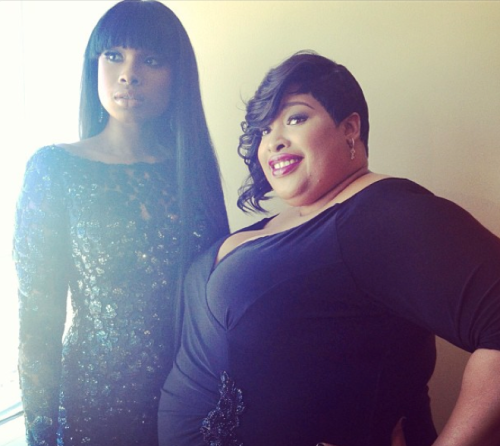 The Academy (the official Oscar governing body) shared photos throughout the evening, here are two of their shots of  Jennifer Lawrence.

A George Clooney-Ben Affleck confab, also via The Academy Instagram. 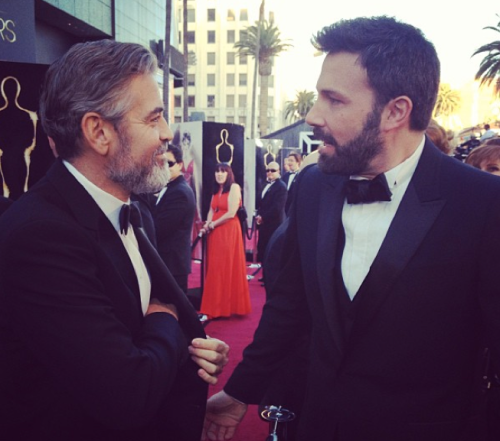 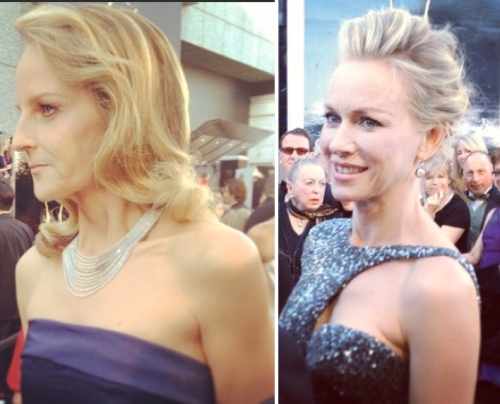 One of the nicest parts of the evening was seeing Robin Roberts back at work, she wore Marc Bouwer. 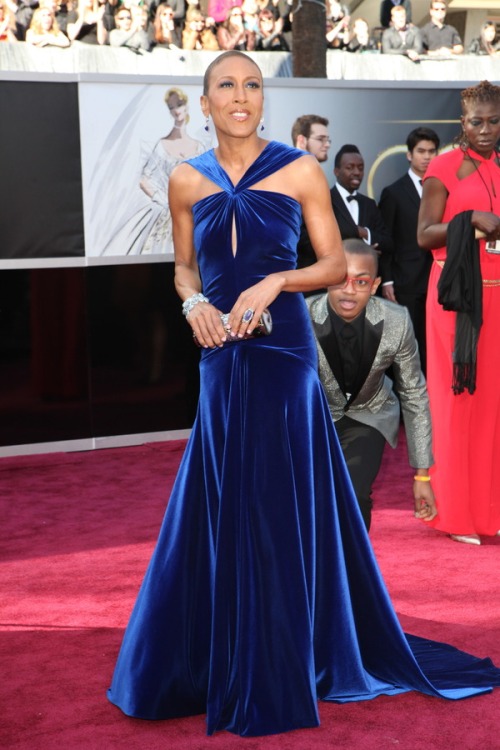 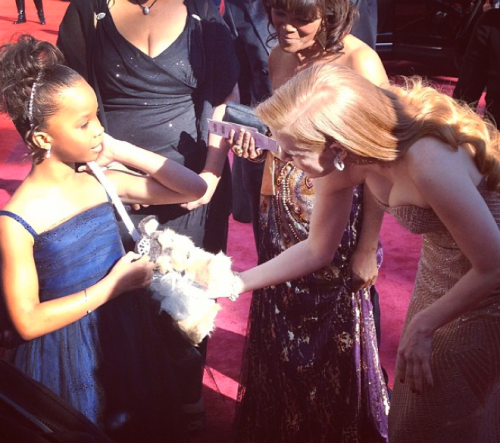 A better look at the young actress. 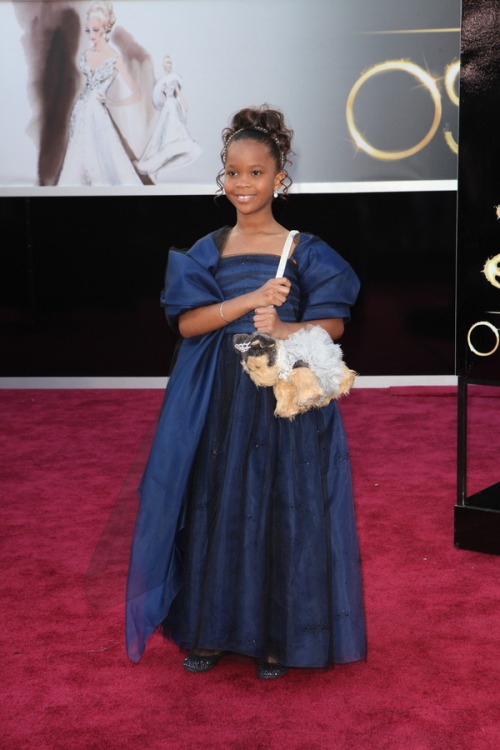 Another social media phenom, designers and celebrities tweeting sketches of the gowns they were going to wear, Heidi Klum did that with the sketch designer Julien MacDonald did of her dress for the Elton John AIDS Foundation party. 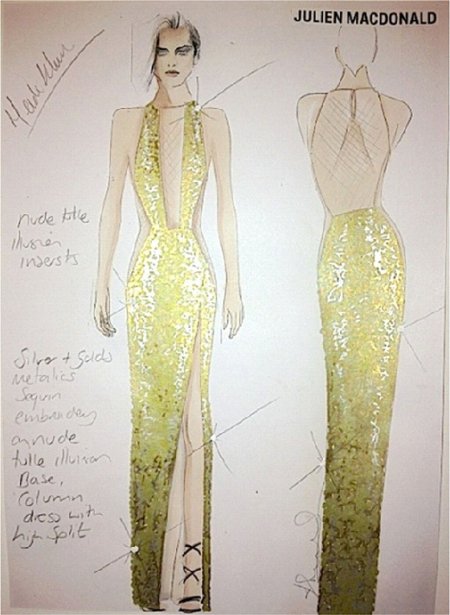 Here is how it looked in the flesh. So to speak. (Ahem.) 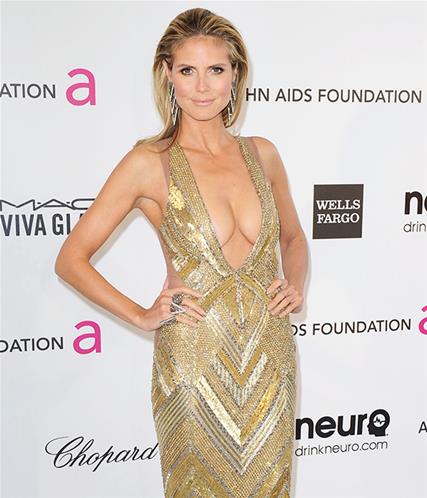 As always, Vanity Fair’s bash is one of the hottest tickets in town. 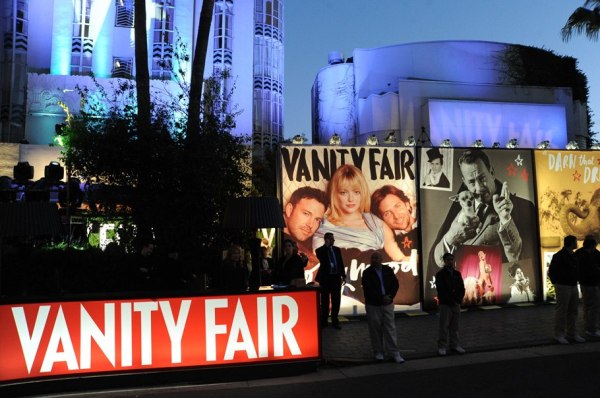 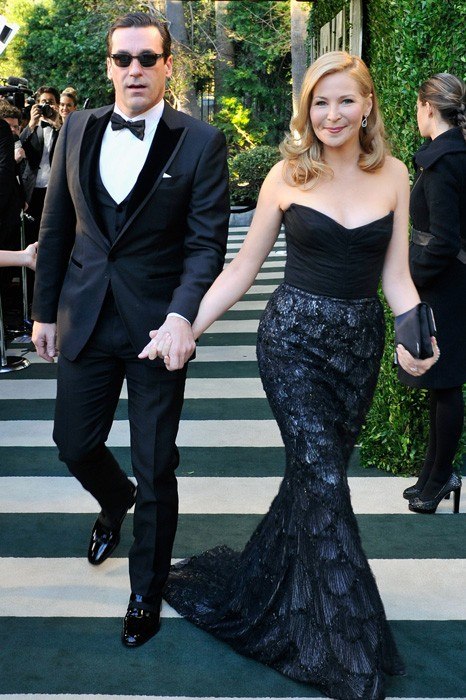 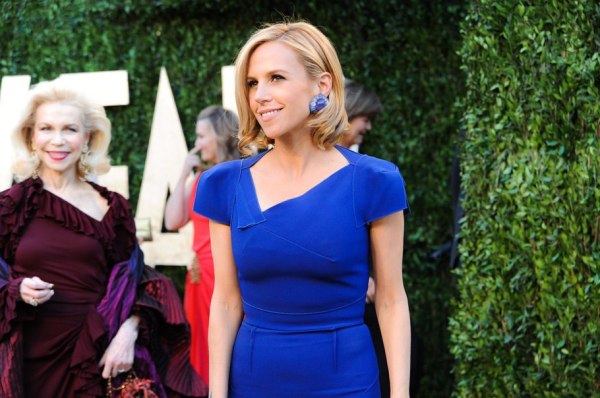 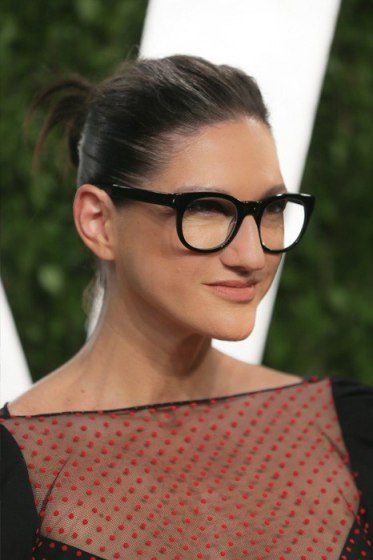 The post-ceremony parties are where you see some of the Hollywood royalty not showcased on the red carpet. Below, Kirk Douglas and Anne Buydens. 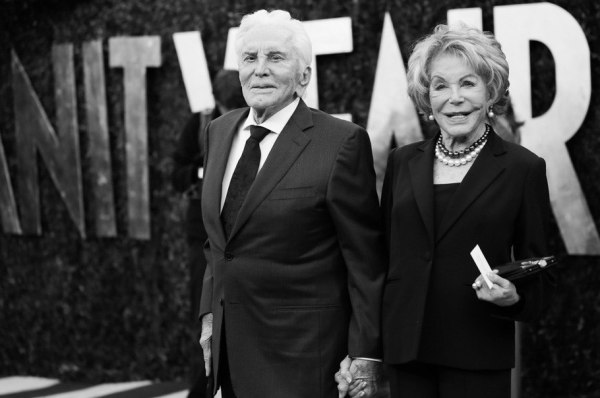 Some of the moments captured were simply delightful. Below, Cheryl Alley and Ron Howard. 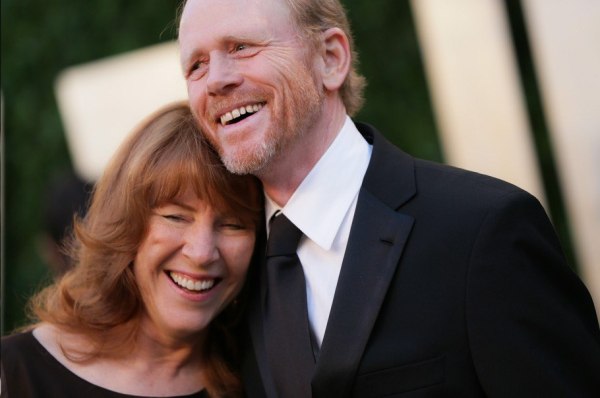 It was fun to see the broadcast again, it has been several years since we just sat down and watched the show. Parts of it were moderately entertaining, but the production of the show was flawed by an overly long introductory segment that was passably humorous, at best.

I don’t imagine the host, Seth MacFarlane, will be invited back. He is an immensely talented young man. One need only watch a spot of “Family Guy” or the film “Ted” (his creations) to recognize that. He was certainly entertaining during parts of last night’s broadcast, utterly charming at other points. But for too much of the program he just wasn’t funny. Forget questions of taste, it was about making people laugh, and you cannot expect people to laugh at “jokes” about Presidential Assassination. Adult supervision was sorely needed at times, but it didn’t seem like there were any grownups on duty.

The producers knew exactly what they were getting with their choice of host. They are desperate to grow the young, male audience, that is why Mr. MacFarlane was chosen. And while he was adept at ‘steering’ the show, the humor just wasn’t all that… well, humorous.

The Twitteratti were vocal about the host.

We leave you with one more Tweet, this one weighing in on the fashion issue. It comes from someone you know, The Consort.

6 responses to “And The Award Goes To……”