Win a Pair of Jack Rogers!

Hello-Hello, we hope you enjoyed a lovely weekend.

Today we have a little surprise, something that we hope will brighten up your Monday and put a smile on your face: we are giving away a pair of Jack Rogers!

The sandals are legendary with most preps, seen throughout the year in warmer climates, worn a good eight months of the year in cooler climates.

For those not so familiar with the brand, a bit of history via the folks at Jack Rogers:

“Born on the streets of Capri, the Jack Rogers Navajo sandal immigrated to America courtesy of style icon and First Lady Jacqueline Kennedy. Kennedy favored its elegant ease as a relief from the formalities that her official life demanded.

First made by small, independent cobblers in and around Palm Beach, Jack Rogers put the sandal into expanded production in 1961. The Jack Rogers Navajo sandal was an immediate hit as it became available to fashionable women coast to coast.

The classic whip-stitched sandals are now seen throughout the world, but the Jack Rogers Navajo sandal is still made by hand in Florida. Another look at the former First Lady in a pair.

These days there are a lot more colors and styles to choose from.

The line has grown to loads of other styles, there are oodles of options in the collection now, including the Pop Art Navajo by artist Kenny Scharf, Slim Ballet Flat and the Clare Wedge.

The company even has a smashing new flagship on the upper east side.

They also are a force for good, a donation from the sale of each pair of these Memorial Sloan-Kettering Navajos will go to the Cancer Center. 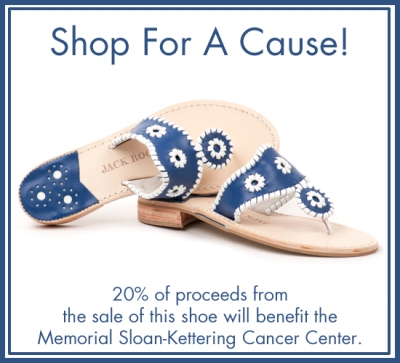 But today we focus on the Jack Rogers College Colors. Below we show several pair of Navajos that would be ideal for school functions at, oh, let’s say Clemson (L), or the University of Michigan (M), or the University of Oklahoma (R). There are several other schools where that red and white pair would also be ideal, including a University-that-shall-not-be-named-in-a-state-that-begins-with-the-letter-O.

The shoes retail for $105, we’re thinking Vanderbilt fans will like the pair on the far left, while those fond of N. Carolina will appreciate the pair in the middle, the Navajos on the far right will definitely hold some appeal for Florida fans.

Actually, these are fab whether you went to one of the schools or not, the color combinations are striking.

So down to business, the lucky winner will receive their very own pair of Jack Rogers Navajo sandals from the College Colors collection.  We admit to being excited about this giveaway, the sun is shining brightly, spring (and spring break!) is on the horizon, it’s the perfect time for a little fun and frivolity.  Here is how to enter:

You can leave a separate comment for each entry, or put them all in one, whatever works for you. We’ll keep track of all this and pull the winner using a random number generator.

The contest ends this Friday night at Midnight, we’ll announce the winner on Monday. In the interim, you can you can even follow that cute Jack Rogers girl (seen below) on Twitter, or visit the Jack Rogers Facebook page, its Tumblr, and/or its Pinterest, they even have a board with nothing but photos of Jackie Kennedy Onassis.