Hello-Hello, welcome to a soggy Thursday here in The Great Midwest.  Frankly, we have absolutely nothing to complain about.

We are especially grateful our princely sibling who hails from Boston is here on holiday, but our thoughts and prayers are with all those impacted by the hurricane.

There is so much going on, today’s post is essentially a compendium of things happening on the Preppy Planet, from True Prep to Lilly Pulitzer wedding gowns.

We begin with a little something from the book section in today’s USA Today, “Cool fall authors: Lisa Birnbach and Chip Kidd“. 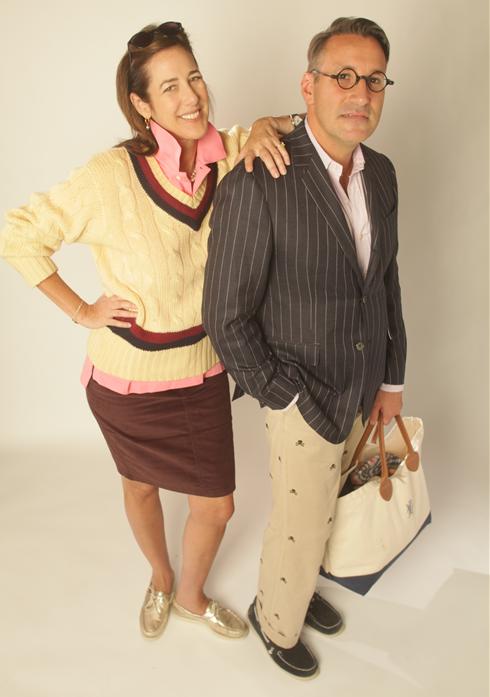 Bob Minzesheimer managed to get a variety of fun facts and tidbits into the story profiling True Prep authors Lisa Birnbach and Chip Kidd, including how they met (can you say Facebook?!) and this:

Birnbach on preppies and money: “It’s not about the money. That’s what people misunderstand. It’s about a confidence level and good manners and sense of traditional style. That’s why our chapter on fashion is called ‘I Just Found It in My Closet.’ ” (She still wears her father’s tennis sweater and her grandmother’s pearls.)

Perhaps the longest review on the book we’ve seen thus far is from Michael Oppenheimer in Slate, “Muffy Adores Synchilla“.  Mr. Oppenheimer begins hi story with a look back at TOPH (The Official Preppy Handbook), author Lisa Birnbach’s initial foray into the topic, and offers a reminder to readers:

“Her message was, Don’t be intimidated by prep, because it is mostly an aesthetic—a grand aesthetic, in fact, and easily copied!”

Mr. Oppenheimer likes many things about the soon to be released book:

“True Prep does get a lot right in updating the original. For example, it’s absolutely true that the biggest innovation is prep style is “fleece” fibers, like the ones in Patagonia clothing. Prep clothing used to be defined by natural fibers, but now the ultimate prep material is a synthetic. Bull’s-eye, I say.”

But he isn’t crazy about parts of the volume:

“….the new book tells us that yoga is now preppy. So is apple pudding. And the lemon. “The Preppy Mix Tape” includes Thelma Houston and Laura Branigan (but apparently not Dave Matthews, who is the entire soundtrack on some prep-school campuses). Burberry is preppy, the authors say—well, maybe, although these days it is probably too high-fashion to be preppy. But Prada shoes? I must dissent.”

We particularly enjoyed Mr. Oppenhiemer’s take on what is necessary for “…prep to live on,” and recommend the review for those interested in the topic.

One last note from the folks over at Fashion Windows, in “Take Ivy, True Prep and Sperry Top-Siders: Kindred Spirits“.

“Two books and a pair of shoes make an unlikely triad. But, when you talk about preppy style, they are interchangeably linked.”

For those interested in staying on top of things related to the book, the True Prep Facebook page is a good place to start.

For those who enjoyed our post on the new Lilly Pulitzer Bridal Collection, the entire 2011 line is now up at Designer Bridal. 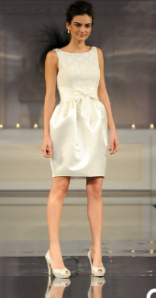 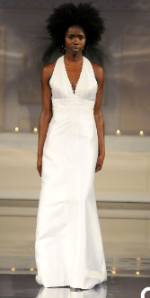 Perhaps the site’s best feature is the ability to zoom in on the dresses, that level of detail helps one appreciate the work going in to each gown.

Our last prepified item? An interesting post over at The Stir: “Forget Santa Sweaters- Let’s Have a Preppy Party!” 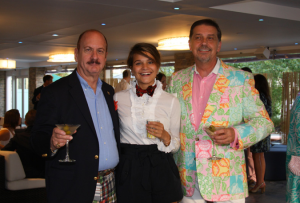 The post seems a trifle… well, negative. We rather liked the party’s theme, “From Boat Shoes to Blazers,” it was quite the big do in Newport last week. The festivities were hosted by our pal, Kiel James Patrick, along with Bonobos, Vineyard Vines, the Pink Pineapple and Fred of Unabashedly Prep.

We very much liked Sarah’s Lilly dress (R) in this fall’s Koi pattern, and Hannah (L), is always darling.

Knowing Kiel, those pants seemed almost tame! We have to disagree with the way The Stir captioned this photo.

“Madras. It’s not just for pants. (But it should be.)” We love a riotous madras jacket hanging in the closet.  As we tweeted this morning in response to comment about the Stir story, “condemnant quod non intellegunt”.  (They condemn because they do not understand.) Rather than get our whiskers in a wad we’ll simply suggest popping over to Kiel’s site to see all of the party pix, it looks like it was loads of fun.

We close with something that made both The Consort and the entire staff here at the Prepatorium smile:

New to us, the record was first released in 1981; apparently there were only 200 copies pressed, making it quite rare.  While on our Facebook page this morning we discovered there is actually a FB page for fans or collectors of the record.  Amazing. The rumor is that Lady Gaga is searching for a copy because she wants to re-record the song.