“The United States of Ralph Lauren”? (It’s Those Olympic Uniforms)

Why are we so perky here at the Prepatorium? Among other things, our first order of the 2010 Lilly Pulitzer Stationery and Gifts line arrived yesterday!

As anticipated, there is lots of goodness contained within, the Watch Sets are outstanding. 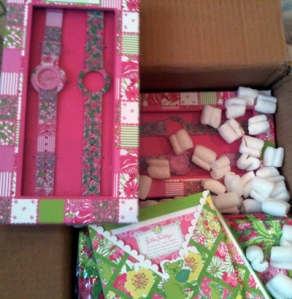 But on to our main topic, the Polo Ralph Lauren Team USA uniforms for the Olympic Winter Games in Vancouver.  The games get underway in 9 days and yesterday the USOC and David Lauren unveiled the opening ceremony uniforms.

Some may recall our original post in July on the uniforms, amplified in our December post where we also show Nike’s podium jacket. (Along with the proscribed look for the snowboarding team, perfect for that sport.)  In this November photo you see the PRL (Polo Ralph Lauren) looks on the left, the Nike styles are on the right.

Back to the Opening Ceremony uniforms; a snooze news release describes the look:

“…a functional cotton fleece pant, a navy and red down jacket, a classic cable turtleneck, and a traditional wool hat adorned with American flag adding a distinct feel of patriotic spirit.”

As expected, anyone and everyone can purchase their own version of the uniform.  The styles may be acquired at the Team USA shop, along with all manner of  Olympic merchandise, including the Nike Podium Jacket and other pieces.  They are also offered online at Polo Ralph Lauren, PRL stores, and many department stores.

Here are the individual pieces comprising the look; we will be terribly crass, raising that nasty “M Issue” by posting prices as well. (Gasp! The horror!) We begin with the Opening Ceremony Jacket ($325)…. 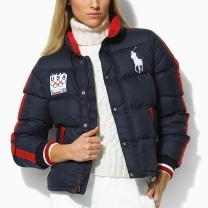 And the Opening Ceremony Sweater ($425).

The items above are all shown with links to Women’s sizes, although they are available in Men’s, Girl’s and Boy’s sizing. We did not see the Fleece Pant in the Women’s collection, but found it in the Men’s department ($165). 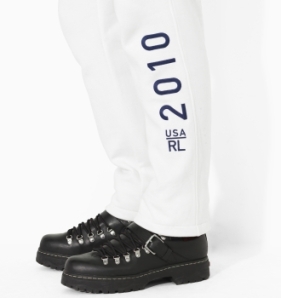 There are many additional items we are not showing, tees, more fleece, polo shirts, etc.

We take issue with the statement from the USOC’s public relations department on how we as Americans feel about the uniforms:

“”Polo Ralph Lauren has outfitted the team with a timeless look – one that fellow Americans will be proud to wear,” said Lisa Baird, USOC Chief Marketing Officer.”

We appreciate the classic lines and the way the uniforms were designed with homage to the 1932 Lake Placid Games.  This is evident in the sketches released by PRL last year of the athletes Olympic Village styles.

The fabrics and details are outstanding, we’ve no doubt these are quality pieces.  (You know where this going, consider this your chance to flee.) However. We are constitutionally incapable of praising uniforms with a logo the size of an iPad. Honestly. IOHO it is just. plain. tasteless. To paraphrase one of our favorite fellow Tweeters, “Just because they can doesn’t mean they should.”

The Vancouver Sun put it this way:

“The American display, for example, is a testimony to corporate branding. The great republic now appears to be the United States of Ralph Lauren.”

This photo is not part of the Sun’s story, we merely insert it as a point of reference. 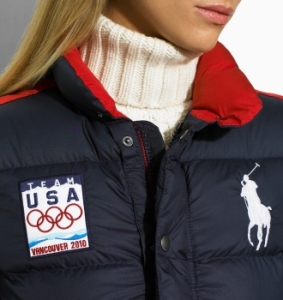 Back to the story.

“Ralph’s got the official Olympic supplier gig, and one could be forgiven in thinking that polo — the kind played with ponies — is now an official Winter Olympics sport, given the ubiquity and prominence of Lauren’s horsey corporate logo on the clothing. The logos on his shirts are now the size of actual polo ponies.”

Moving on, one of the cuter items in the Boy’s & Girl’s lines: the Olympic Games Hat/Mitten Set ($95). 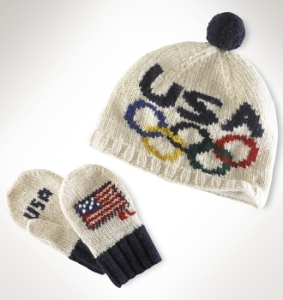 If this is all proving to be a bit of a budget-buster, there are always the Olympic pins.  The Ski Pin (L) and the Olympic Pin are each $10. 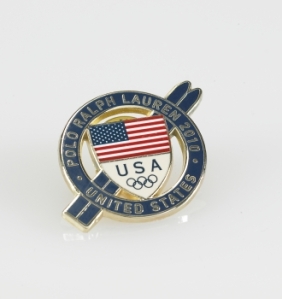 Thank you for your gracious indulgence of our borderline psychotic diatribes of our silly little Logophobia concerns; you are more than tolerant.

With this we dash, we actually have a number of social engagements today and there is all that fab Lilly to unpack and ship out! Wheeeee!

15 responses to ““The United States of Ralph Lauren”? (It’s Those Olympic Uniforms)”