Happy day to everyone, as we all continue making our way through the week. Here at the Prepatorium we are grateful to be careening toward the end of February!

We start today with a look at the delightfully cute Jack Purcells made exclusively for J. Crew by the designing minds at Converse.

The sneakers are in the distressed material currently popular, and they are available online and at the Liquor Store in blue as well as white.  This is unisex sizing again, women are advised to order 1-1/2 sizes smaller than their normal size.

Some readers may be familiar with the Converse One Star collection at Target.  An FYI, many of the Converse pieces are marked down significantly, like the Men’s Track Jacket, Originally $34.99 and now priced at $13.99.

We thought the Toddler Girl’s Oxford Pink was cute. (It is not on sale, still at its $17.99 price point.)

Polo Ralph Lauren continues to promote their Last Chance Sale, touting “Up to 75% Off” original prices.  The Women’s Skinny-Fit Polo is now $49.99, a markdown of about 33%.

There are scads of wonderful bargains to be found at Ralph Lauren in every line, including the Home collection.

Tommy Hilfiger still has substantial amounts of merchandise at 75% off, and the markdowns also continue at Brooks Brothers.

Speaking of sales and clearances, J. Crew’s “Final Sale” is offering “free shipping” to those spending $100 or more online; the coupon code is SHOPNOW.  This promotion runs through Thursday, the 19th.

Forbes Online reports on the latest survey detailing “America’s Most Popular Stores” and the news is basically positive, with increases in the Customer Satisfaction Index for many retailers.  Where do shoppers like buying the most? Nordstrom maintains its ranking in first place, with Kohl’s close behind.  Below, a few more stores and comments from the story:

Target was flat, neither scoring higher or lower than last year.

Wal-Mart moved up on the scale, scoring a 72.

“The reason Wal-Mart appears so low in the index, despite its current financial success, is because it is a pure price competitor, Fornell says. While price does play a role in customer satisfaction, shoppers are happier snagging an item they really want along with an enjoyable shopping experience. “Many of the customers who frequent the discounter would not be doing so if they had a bigger wallet,” Fornell says.

What stores dropped in their scores? Dillard’s, Macy’s (said to “… rank among the worst…”) and Sears:

“In every division, Sears is failing against its competitors, Fornell says. While it remains flat with a score of 72, the department store is struggling to hold on to shoppers, with low scores across the board and an increase in customer complaints.”

Fashion Week continues; we thought we would close with a few looks from this fall’s collection by Lauren Pierce. 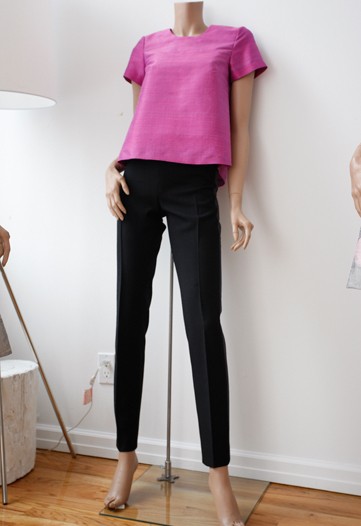 The eco-friendly line is designed by Lauren Bush, a niece of the former President. The ultimate customer for this line is described in the following way on the Lauren Pierce website:

“She is socially conscious and cares about the world she lives in. She doesn’t dress according to passing trends. She views her clothes as natural extensions of who she is inside and out.”

Yes, it is the woman whose significant other is David Lauren of Ralph Lauren fame.  This is the point at which TP always asks the same question: “So, if they get married will her name be Lauren Lauren?”