We continue Fashion Week coverage, starting today with the Brooks Brothers presentation of their Fall 2009 Collection. Like many others, this is not a runway show, but an event at the Madison Avenue store. 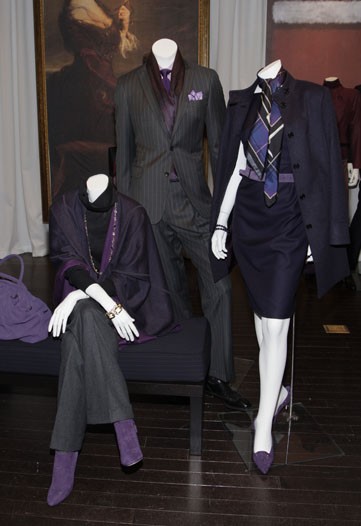 The styles are displayed in tableaus, as seen above. We like the rich gray and lush purple, it is very striking.  The review in yesterday’s WWD mentions plenty of cashmere, in twinsets and coats.

In an interesting partnership with Wilson, the official NFL football maker, Brooks will debut a new briefcase and duffle crafted of vintage leather from Wilson. And they will retail a limited edition co-branded football made of this same material; the football is just visible in the photo below.

The review also talks about changes in the Black Fleece line from designer Thom Browne:

“The women’s wear has lightened up. “We’re softening the girl,” Browne said, noting there are “more skirts and dresses” offered this time. “The collection is a lot more feminine, from the shapes of the skirts to the looseness of the knits.”

We are intrigued to see the Men’s full-length beaver overcoat Mr. Browne has created. All in all it appears to be a nicely done collection that is eminently wearable.

Thought we’d sweeten your day with a few tidbits we haven’t posted yet, including the debut jewelry collection from Liberty of London.

The line will be available at Barneys.

We also share a few images from the Lacoste Fall 2009 Men’s collection, we ran out of time when posting the Women’s collection on Saturday.

As the WWD staff put it in their review of the line:

We have another frightening instance of multiple AntiPreps being located in the same place.

Between Ms. Kardashian and Paris Hilton is Nicky Hilton, singer Kellie Pickler is on the far right. Quote of the Day award clearly goes to Ms. Hilton, as seen in an interview with E! News this weekend:

“There’s nobody in the world like me. I think every decade has an iconic blonde, like Marilyn Monroe or Princess Diana and, right now, I’m that icon.”

We bring you an update on a favorite brand for TPC (The Princess Consort), Hart Schaffner Marx.  In this January post we detailed the firm’s bankruptcy filing, but there was good news on Friday from a Federal judge, allowing a line of credit to be extended so the menswear manufacturer can keep operating.  It also appears creditor are showing patience with HartMarx as it works to dig out of the financial mess.

President Barack Obama owns several of the Hart Schaffner Marx Golden Trumpeter suits; it was also a tuxedo from the line that he wore to the Inauguration Balls.  Speaking of Presidential fashion, one of First Lady Michelle Obama’s favorite designers was at Fashion Week.

Maria Pinto did not do a runway show, but rather, held appointments to show her Fall looks. Below, the one we found most appealing:

It would not be Fashion Week without seeing models struggling in the insane shoes they must now wear. These shots are from Sunday’s Hervé Léger by Max Azria show:

The model on the right was wearing these: 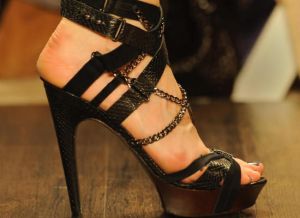 One designer, Maria Cornejo, is vocal in her thoughts on the heels and the spills taken by models; she spoke with NY magazine:

What could I possibly add to that comment?  Except, perhaps this:

Here is one for the “When Pink Goes Wrong” category, the high-heel sneaker. 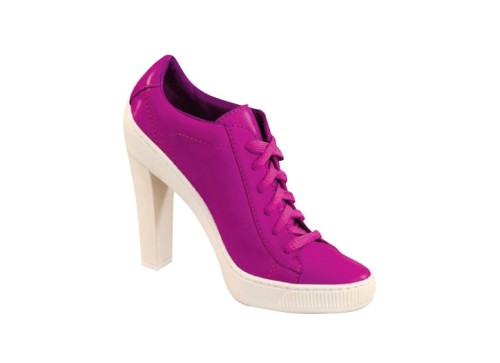 This one is the result of a Puma – Sergio Rossi collaboration.  Not that that should be anything about which to brag…